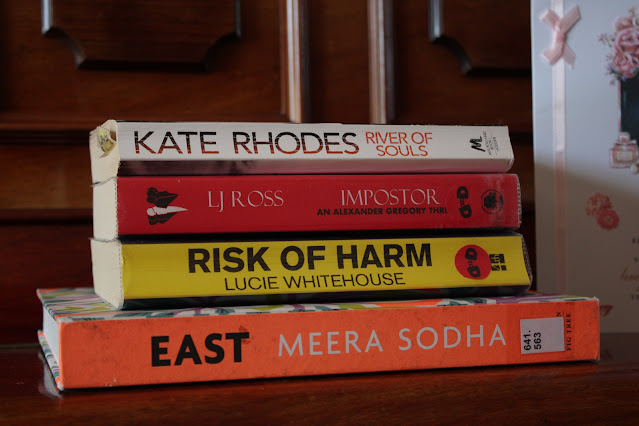 Well. the youngest managed to chop his own onion, along with three other children who also had truly appalling mothers who had not pre-cut theirs either. Apparently some people were crying. He also (hopefully) managed to deal with raw chicken without mishap and the non-vegetarians ate what he made and said (mostly) complimentary things, although I did give them quite a long talking to last week about being nice, so it might have been partly leftover from that.

You will see I have a cookery book in my pile of library books. This is in the vague hope that it will inspire me to make something (a) new and (b) nice. I really struggle with cooking these days to be honest. I used to make all sorts of delicious vegan things back in the day, but now I make the same stuff all the time and none of it is really inspiring.

Part of it is I have lost my appetite a bit and I just don't fancy many things. Part of it is the reaction of the youngest two to anything new or unusual or not from the prescribed list of Things I Will Eat. The middle child has perfected the art of saying, 'Is that [insert ingredient here]?' in a flat and doomstricken monotone, much as if one were saying, 'So that's it then, the apocalypse is here.' I sometimes think how easy it would be if I could just pour out a bowl of kibble, like I do for the dog.

Anyway, I am relying on Meera Sodha to pull me out of my culinary slump. The biggest boy, who is a vegan, is no trouble at all and will eat anything meat and dairy-free, so I might just make vegan stuff and the others can eat it or not and I shall ignore them entirely. First up, I am thinking tempeh with pak choi and tomato sambal. I absolutely love tempeh and pak choi is pretty good too. And maybe mashed potato paratha with a quick lemon pickle. Although there might be a risk of people asking what's next after that one. They do like it to look like a proper all singing all dancing meal.

One thing I would say about lots of vegan and vegetarian recipe books at the moment is that they are low in protein. Fine for most people, but the biggest boy is a bit of a weight lifter and will be asking where it is if it isn't obviously a substantial part of the meal.

If you have any winning recipes that Everyone Will Eat, I would be glad to hear of them. xx