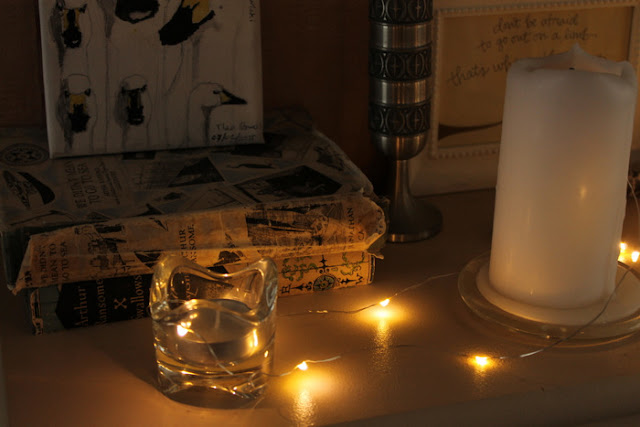 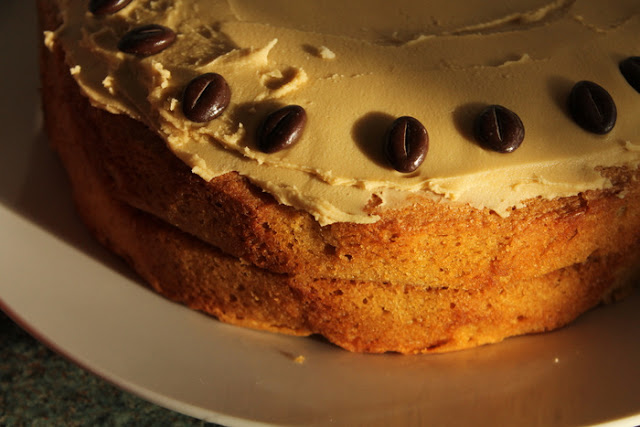 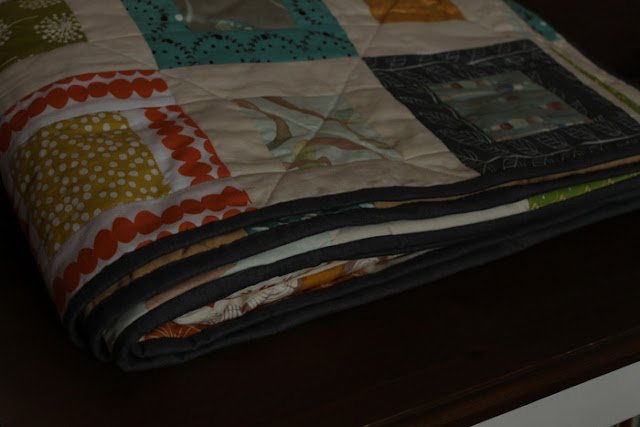 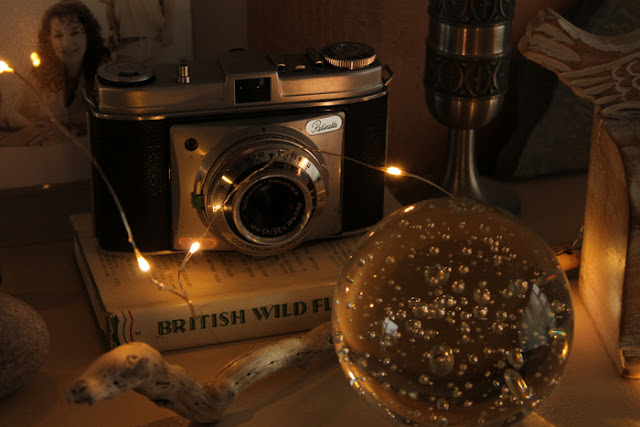 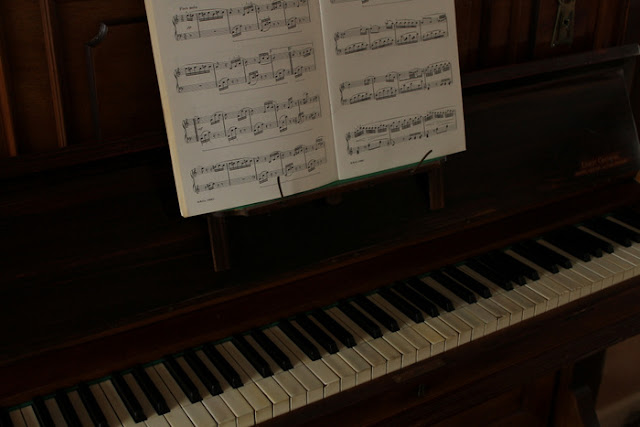 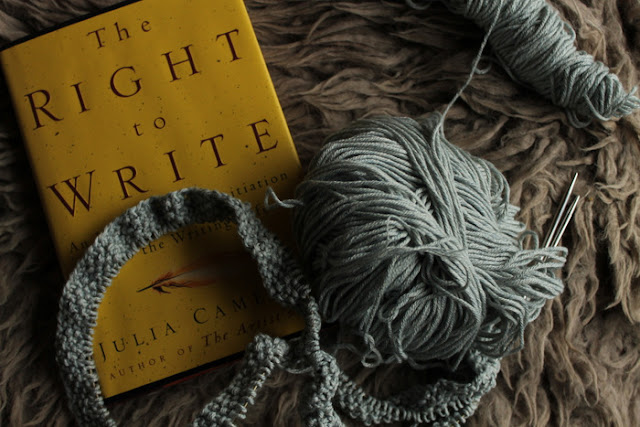 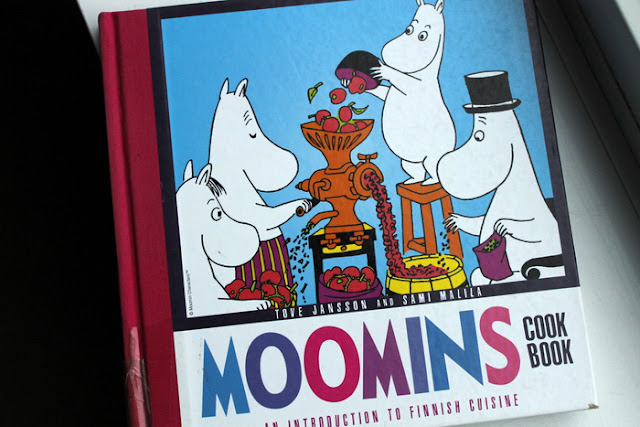 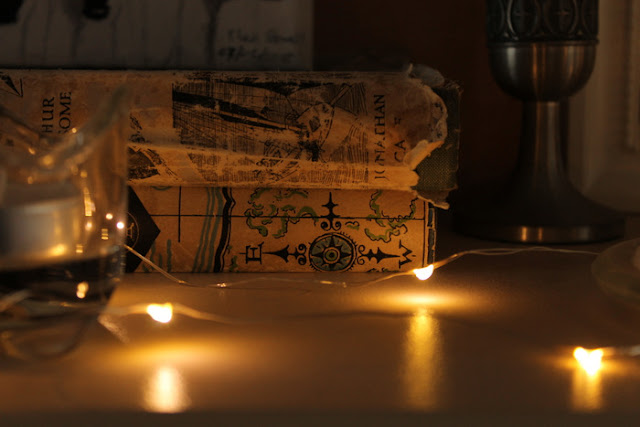 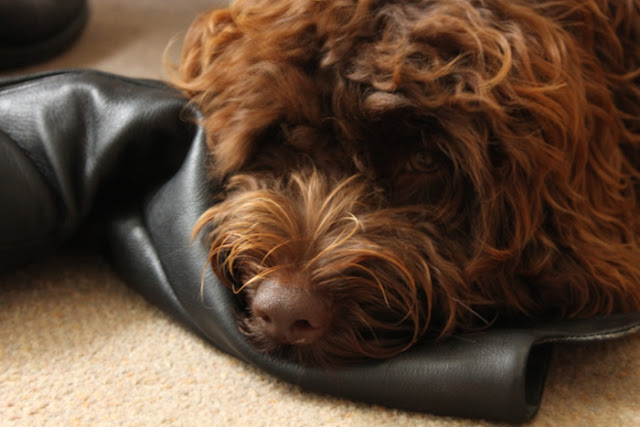 Twinkly lights, cake, books, knitting, quilts, Moomin cookery and a warm puppy. Is that what hygge is? I'm never quite sure. The dog is snoozing on my boot. Sometimes his walk is so exciting he has to have a lie down as soon as he gets in. He found a fellow puppy to go mad with today. Sprinting through the fallen leaves at top speed, nothing better if you're a small dog.

Writing deadlines loom here, and I'm lightly panicky, which is how I operate best. In fact that's why I'm here writing this, instead of somewhere else writing something else - just pressurising myself into full anxiety mode, all the better for accomplishing stuff. Things were on track until a little light illness for a couple of the children, requiring Days Off School. We all know how productive it's possible to be with small people breathing down your neck.

Littlest boy (peering over my shoulder at the laptop screen): Why is it a blank page?

I also seem to spend hours walking the dog. Good for me etc. etc., but really very time consuming. If I slack off a bit he starts chewing the house. He is nicely worn out right now, but by tomorrow morning we will have to start all over again. Today I entertained myself by checking out the contents of people's recycling bins as I walked. Really, your whole life is laid bare out there is it not? All that red wine and two bottles of gin. In one week! Tesco Finest 7-nut granola, fancy. I'm not sure I could even name seven nuts. Unwashed ready-meal cartons. Slack, just slack. Oh, I'm terrible I know.

It's the Christmas lights switch-on this evening in our little town. Every single child is going it seems, and excitement levels are sky-high. Candy floss, a big wheel, street fair stalls, an unknown celebrity, shocking plastic light-up things and chips with cheese, it's all there. The littlest boy has already drafted his Christmas list and re-written it out nicely. It ends "From the goodest boy in the world. PS I would also like an orange in my stocking please." Requests include really grippy gloves and pistol. As in previous years, I persuaded him to leave off axe. He tried for a hatchet or a machete, honestly, I've no idea why. What is it he wants to chop??? Maybe that should be Who. The really grippy gloves have me stumped. He likes to free-run about the place, and I think that's what they're for, so that he can climb walls in the manner of Spiderman. But where on earth do you find really grippy children's gloves? Oh how I hope I won't fail him. The festive season is a lot of pressure, no? 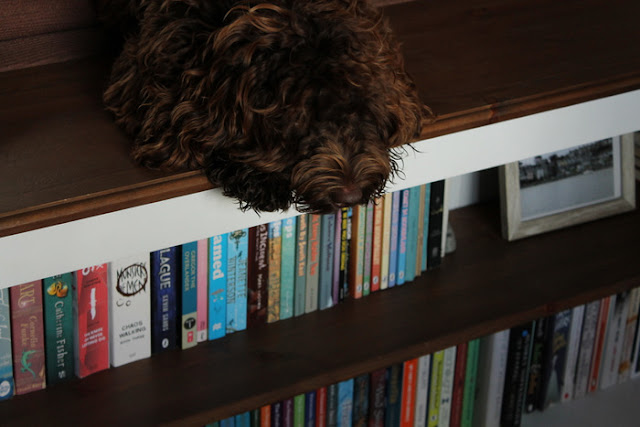 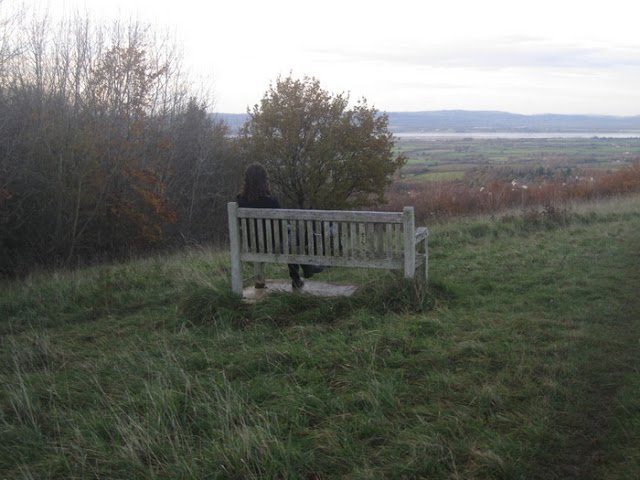 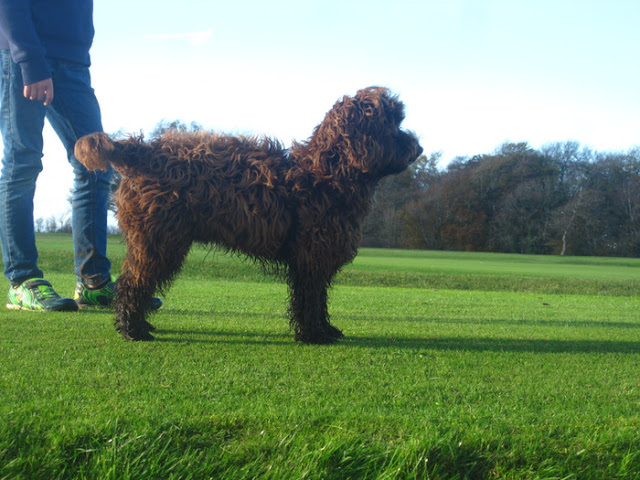 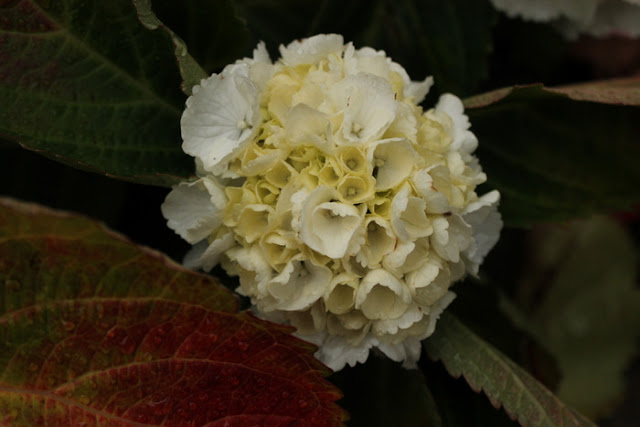 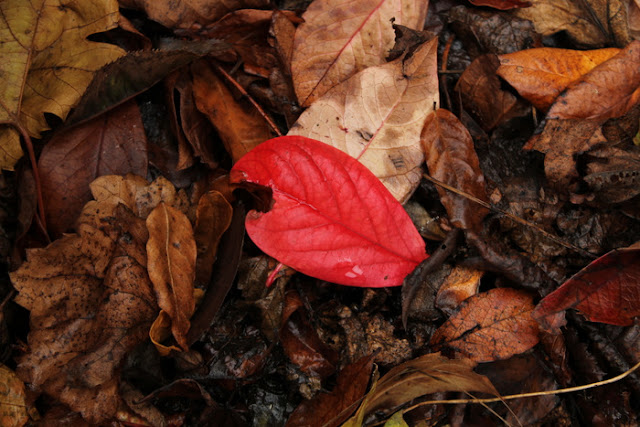 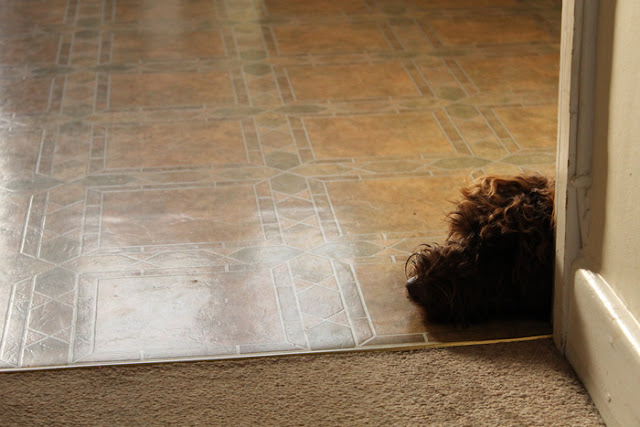 It's chilly enough now that whenever I leave the sofa, a child or a dog slips in behind me and steals the warmth. Even more so if there's a hot water bottle. I have been ousted from the cosy spot I had and now I'm on a hard chair at the dining table. Fear not, I shall oust them back very shortly. The middle child and I got quite breathlessly excited about the idea of an electric blanket just now. John Lewis have one made from Alaskan Huskies. I don't think I shall buy it. More Stuff, you know how it is. I was reading an article today about how we should be happy with what we have and mend things. Mending is very big around here. Broken things are even bigger. I just discovered a broken lampshade in the middle boy's room from the last time he played dens with the littlest boy. Couldn't be too cross, I do like the simple happy games they play together.

Social media is making me anxious here. Not the being on it, more the idea of it and what it might be doing to children. I am being pressured and I am holding firm. Here are some of the things I have read this week, and without going looking for articles, they just fell into my view from one source and another:

Instagram was rated the worst platform for mental health and wellbeing in a survey of 1,479 young people. It has been associated with anxiety, depression, bullying and fear of missing out. Snapchat was fourth from the bottom, then Facebook. Twitter was second and Youtube was highest rated, and the only one felt to be positive overall.

In a study of 1,200 teens, half said they are addicted to their devices. 78% check them hourly. 72% feel they have to respond to texts and emails immediately. 52% felt they spend too long on their devices.

It is common to have more than one screen at any one time. Focus is a problem. Multi-tasking can't be done, it's a myth. The brain has to try and flit quickly from one thing to another. Empathy can be lacking, and some children are finding it harder to connect with each other offline.

A 2015 report found that 5-16 year olds spent an average of 6 and a half hours a day on various devices. For teenage boys it was an average of 8 hours.

Sean Park, co-founder of Facebook has said in an interview that it was designed to appeal to human weaknesses, compelling users to check for new messages, to seek likes, to respond to notifications. Brain hacking if you will.

A quote from him, "Like gambling, nicotine, alcohol or heroin, Facebook and Google ... produce short-term happiness with serious negative consequences in the long-term. Users fail to recognise the warning signs of addiction."

It scares me. It all scares me. I haven't come here to lecture or to rant, just to share what's been on my mind lately. I have my share of screentime. But I really want the children to have fun In Real Life.

Anyway, I hope that wasn't too heavy. Just what I'm mulling over right now. At the moment, books are being read here, trees are being climbed, life is being lived. I know things will change, but I'm hoping for a little more of the good stuff first. You know, childhood.

One final thing, John Lewis don't actually have an electric blanket made from Alaskan Huskies, I would hate to start something. It just looks like it is. I think.
Posted by CJ at 20:42 20 comments:

The essence of me 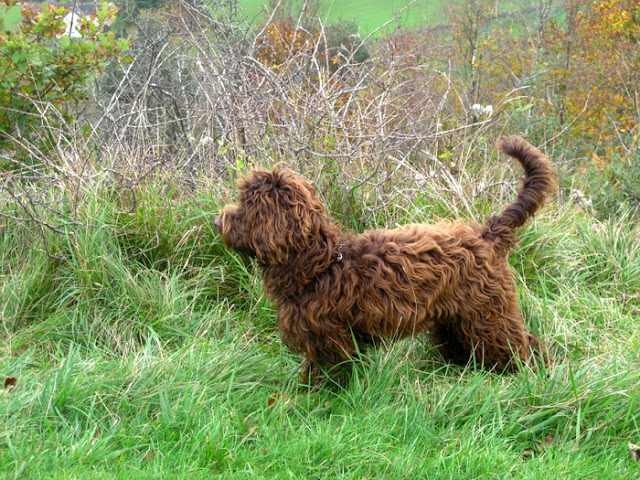 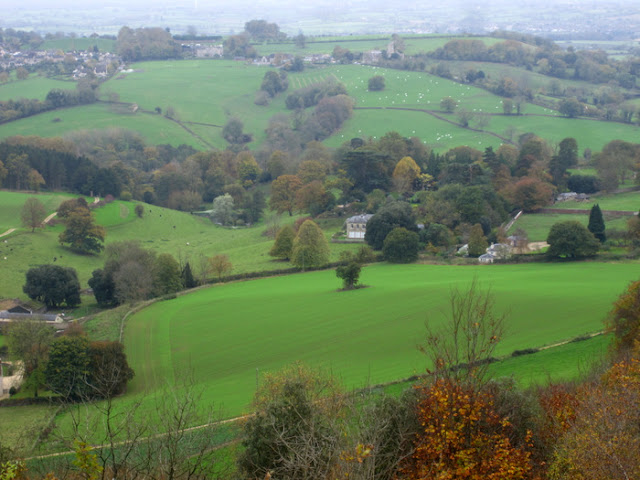 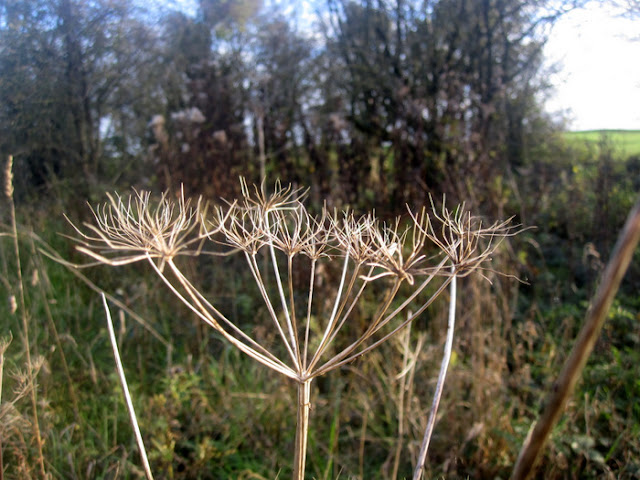 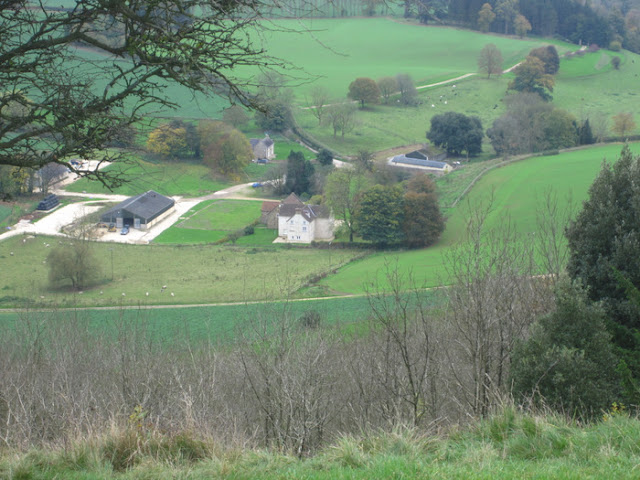 Chilly autumn days are really here now aren't they? Everything is dripping in the mornings, including the dog by the time he's had his walk. I've spent happy hours wandering the lanes and by the streams around here with dog-owning friends and dog-owning new friends. A nice contrast to the busy time that is everything else. Somehow time slips away when I'm out walking him. Legitimate pootling.

I have a little website for my writing endeavours (daren't call it a business). It was horrible. I found a supposedly wonderful website builder thing and deleted the whole website so as to start again afresh. And then proceeded to spend two and a half days in absolute fury when I discovered that instead of being really simple it was actually ABSOLUTELY FLAMING IMPOSSIBLE. This afternoon I deleted the whole thing again. And then it all got worse and I couldn't find the right bit to start again and I got dangerously near the point of having to be certified. Then the biggest boy came home from school and offered to help. I told him he wouldn't understand it, it was a whole new, different thing and all sorts of tricksy. He had a go anyway. I wandered off to rock and hum to myself a bit. And lo and behold he has put together a couple of pages. Not exactly what I had in mind, but at least it is something and it has brought me back from the edge of madness. Do you think it's possible that the children might actually turn out to be useful? It hadn't occurred to me before, but I'm seeing all sorts of possibilities opening up now. The middle boy made something he was very proud of in Design Technology today, which has me wondering, could he knock me up some bookshelves? A coffee table? A new kitchen?

What I really need for the website are some delightful photos of me. An oxymoron, I know. I have asked the biggest boy to take pictures of me on a couple of occasions and they've been absolutely ghastly. I worked out what was wrong with them in the end, it was the daylight. Too much of it. So much in fact that my face was visible.

I also need to be photographed somewhere, I don't know, edgy. Or booky. Or at least not round the back of the garage which is where I usually go (plain pale wall, daylight, yada, yada, yada). Maybe in a cool café, looking clever while sipping a latte with something fancy on the top of it. Or in an antique book shop, frowning slightly while I study the pages of A Treatise of Human Nature. Or with my head thrown back in laughter as I chat to beautiful people at a conference of clever beautiful people. Obviously the real me will not do at all. Wellies, dog, boys, mud, frightening hair. This is not what people want to entrust their writing projects to at all. It must all be hidden, and a squeaky sanitised version scrubbed up for their delectation. So, that's why I don't have any suitable photos.

I do have rather an excellent one that the middle boy took of me. He has fish-eye on his camera and oh, we've had so much fun with it. We have laughed and laughed at the pictures he's taken. My personal favourite, which I think completely captures my essence, is below. 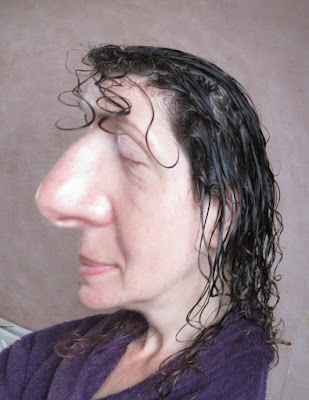 I have a sort of contented serenity about me don't you think? Eyes closed, clearly in the zone. Practically a poster child for mindfulness. If I don't get to have a decorative latte in an artisan café this weekend I shall almost certainly use it on my landing page.

PS I could have made it bigger, but you know, enough is probably enough.
Posted by CJ at 21:21 32 comments: