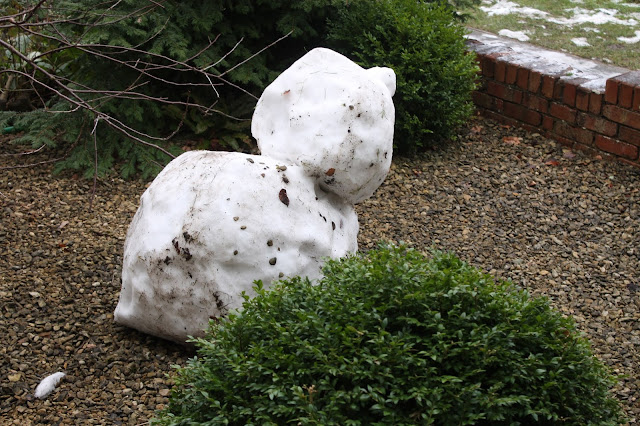 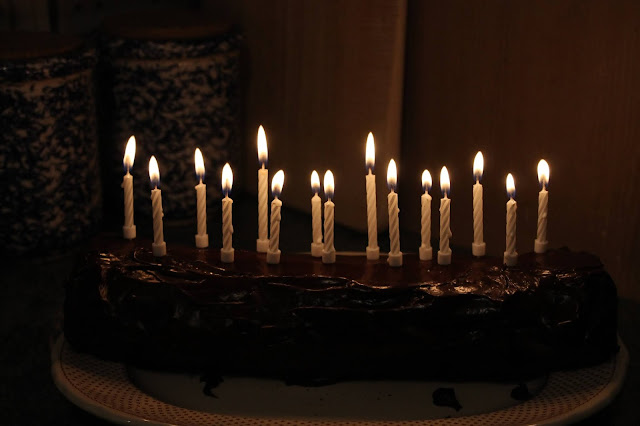 Well that's rather a dismal selection of photos isn't it. The first one is from two weeks ago as the littlest boy's snowman slowly sank in on himself. His head was at a really jaunty angle for a couple of days and I was waiting for the moment when it fell off. It was pretty much all I had going on to be honest. Anyway, it rained and he dissolved in an instant, so there wasn't even any head-off drama. We haven't had any snow since.

Then the middle boy had a birthday. And that is all of my news. If that looks like a yule log it's because it is a yule log. I didn't make one at Christmas (sometimes it just seems as if there's enough food) so he asked for one for his birthday. Fifteen already. I tried to interest him in an online family locked room game, but he just laughed incredulously and explained that such a thing relied on teamwork and cooperation and we never spoke of it again.

Chess has been big here lately. Nothing to do with the television thing, haven't seen it, but the urchins are rather obsessed nonetheless. They have a timer now, which I thought would be a good thing, but it turns out I can't concentrate on going quickly, thinking up moves and pressing a timer as well, it is just all too much.

The littlest boy had an absolute triumph the other day when he beat everyone in the house in one day. The biggest boy said, 'How come when he plays dad he's really bad but when he plays me he elevates himself to international Grand Master level?' The littlest boy went around singing 'I'm the best' for quite a while. Yes, in case you were wondering, we are all totally obnoxious in this house. And deluded.

I am making a resolution to take more photos. Maybe even one a day. I used to do that, but it was a lot easier when the urchins were small and did cute stuff and didn't mind a camera pointed at them too much. The littlest boy and I made some cherry fat rascals just now, from a Sam Stern recipe, so I shall start with a picture of them if I can. They're quite big, but Sam made them twice the size. I can't say I've ever had a fat rascal, I wonder if they're supposed to be the size of a saucer??? I'm not objecting you understand, it's just when I do baking I usually like to end up with more than five of a thing.

I've been taking the ice off of the pond every morning, a good centimetre some days, which is very unusual. I did it originally to lift off all the duckweed, which works a treat for getting rid of it, but then I realised how much the birds were appreciating the water, so I kept doing it. Yesterday a blackbird had a really long bath, which surprised me, given how cold it was.

I've sown some seeds, after being late with everything last year. Tomatoes and cucumbers and sweet peas and delphiniums. Although the hot tomato-ripening days of summer seem a long way off at the moment.

How are things at your end? Good I hope. I shall be back anon with some actual photos and more tales from the sharp end. CJ xx