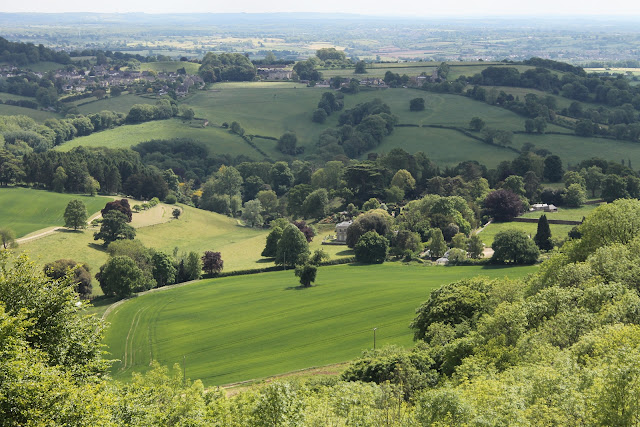 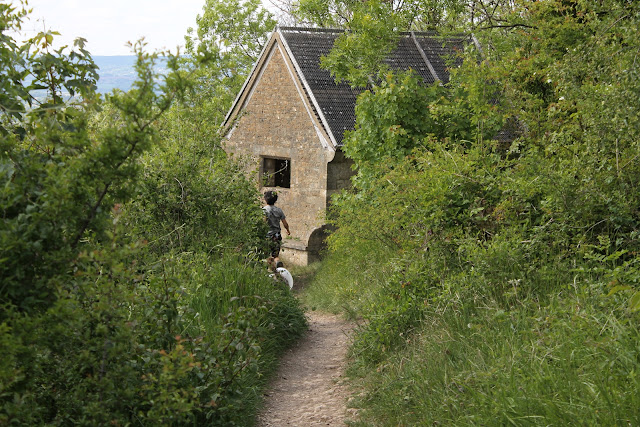 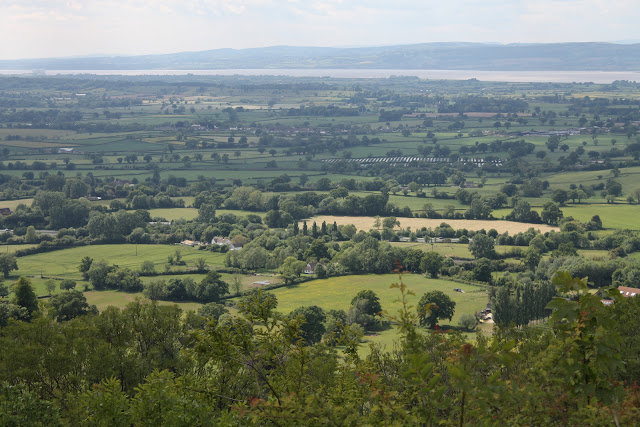 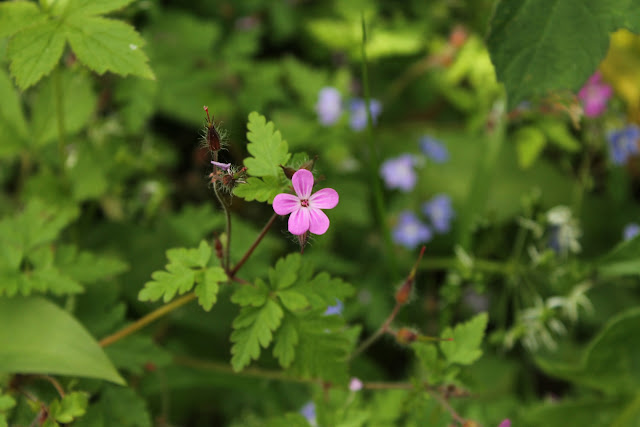 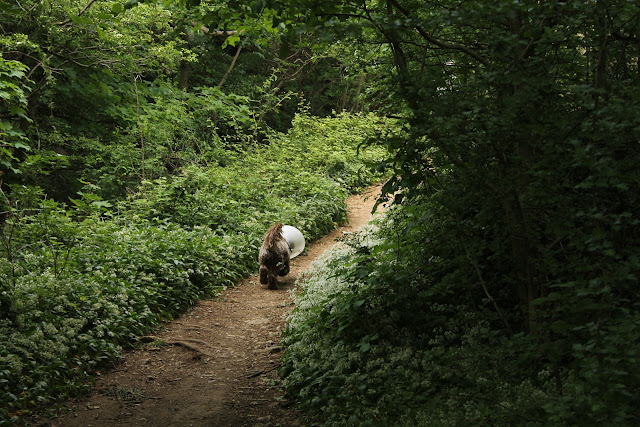 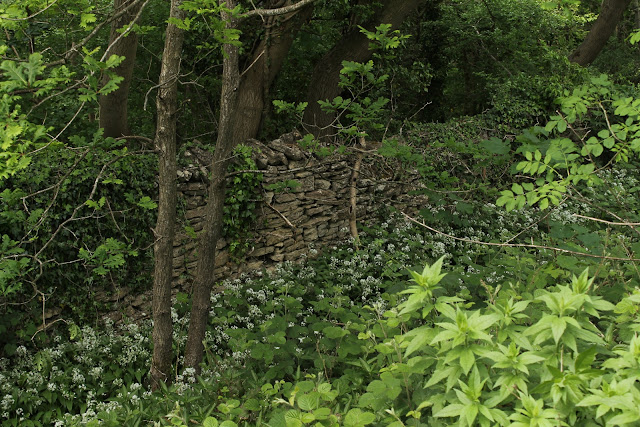 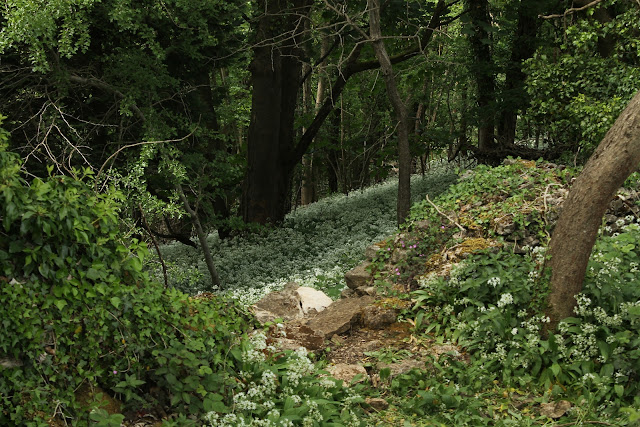 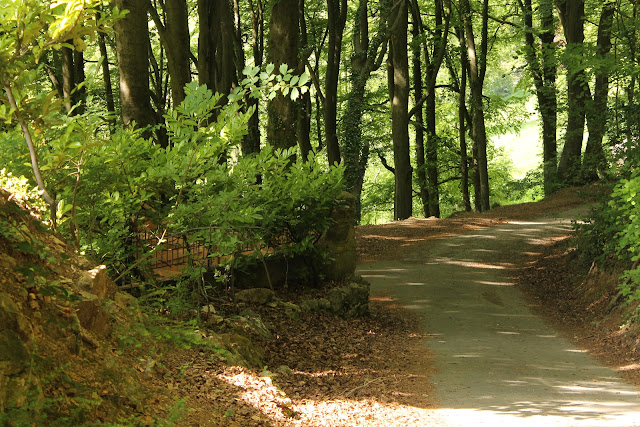 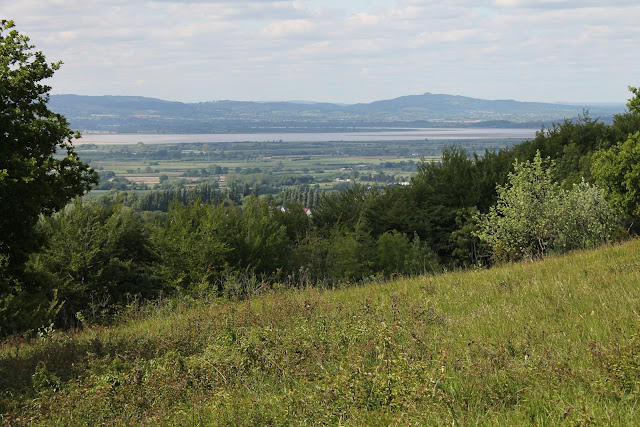 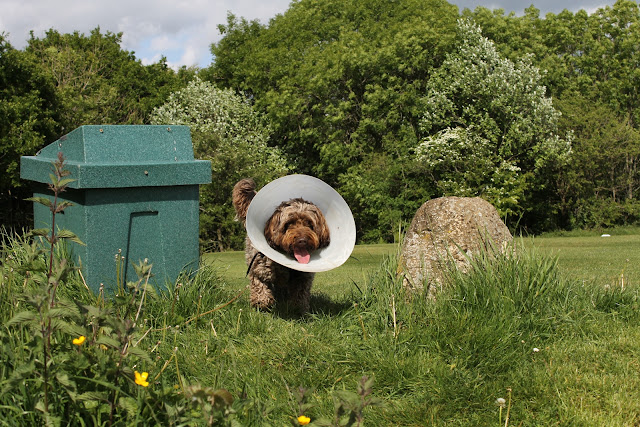 We took advantage of the beautiful weather at the weekend (when did it last rain???) and went out and about the place with the beast. There was wild garlic everywhere and it was wonderful to stand on top of the ridge and look out over the countryside and across the river. It had been a while since we'd been anywhere except within walking distance of home.

The urchins have been out and about running and cycling. The biggest boy fell in a huge bramble bush over a ditch and it took him ten minutes to get out apparently. Honestly, I'm not sure how they manage it, but they are always falling off and falling in and getting into scrapes.

We have been doing some workouts at home. The biggest boy, who knows all about muscles and things, yells at us that we are doing it wrong. Honestly, it's like being in the army.

I believe they have been doing a little learning, although I couldn't swear to it. The middle boy tells me that at 10 o'clock in the morning I will be the liveliest I will be all day, so I am trying to capitalise on that. Sometimes I am almost ready for a nap by 10am though, so maybe I am not actually normal.

We are missing the library. The two younger ones tell me they have read all of the books in the house. I'm sure that's not true, but they've probably read quite a few of them. It's the littlest boy's birthday in the not-too-distant future and he is REALLY EXCITED already. We will be staying at home :) But, hey, a birthday is a birthday, no? It's actually not for three weeks or so, but it never hurts to start building the anticipation early on. And then there are all of the important decisions to be made, such as what to have for tea and what cake and what to have for breakfast.

The dog's ears are a little matted under his cone, which cannot be removed because he instantly chews his itchy spot. It's healing well though, so hopefully soon. Anyway, we are trying very hard to sneak up on him with the dog grooming scissors and snip the matted bits off, but he rumbles us every time. He doesn't trust us a single bit. We may have to resort to bribery with tasty snacks.

I will leave you with a conversation had by the biggest and littlest boys.

Littlest boy: I've got a joke. Waiter, waiter, there's a fly in my soup. Then the waiter says, that's not a fly, it's the chef, he's really tiny and he fell in.

Biggest boy: THAT'S NOT A JOKE.

Littlest boy: IT WAS IN A JOKE BOOK.

Yes, we definitely need more books. But no more jokes, please no more jokes.
Posted by CJ at 22:01 15 comments: 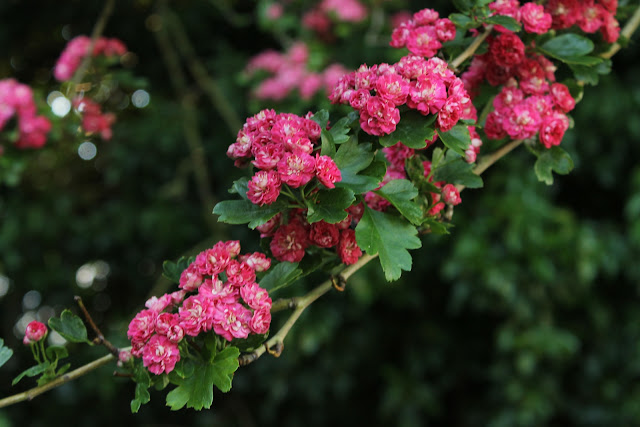 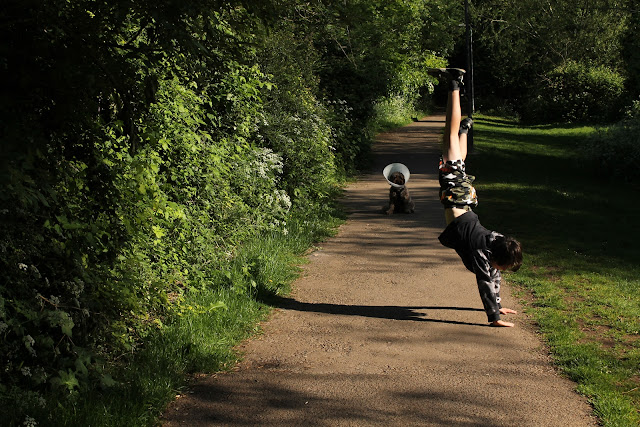 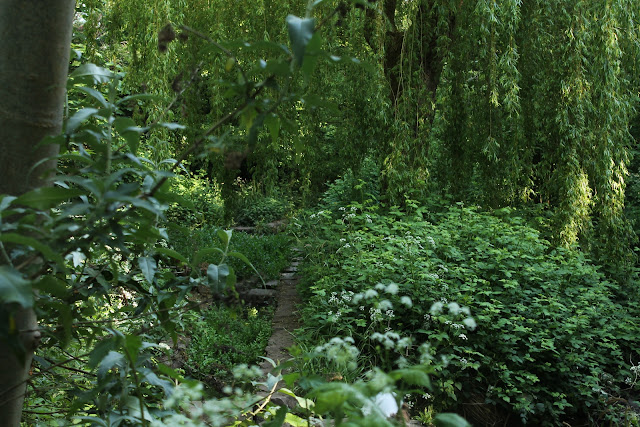 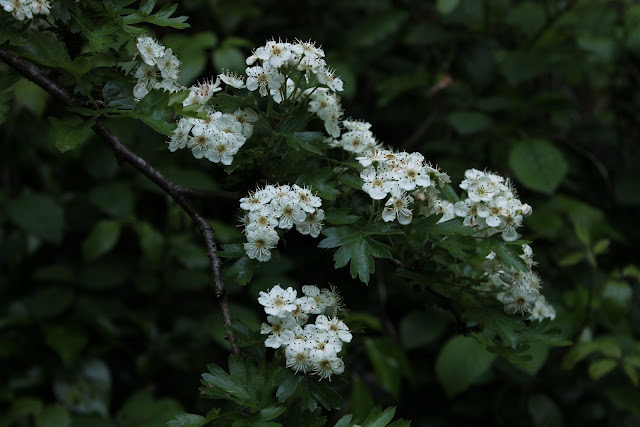 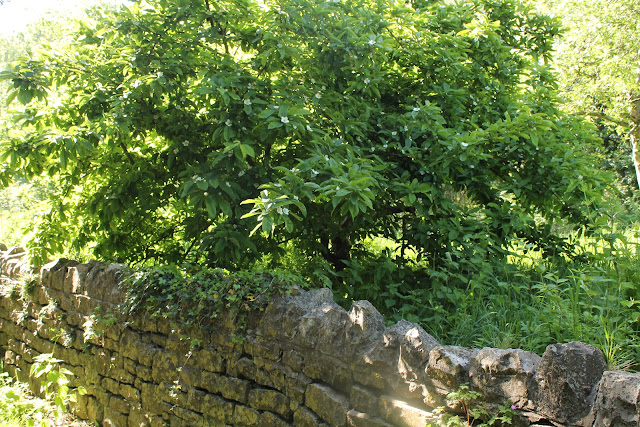 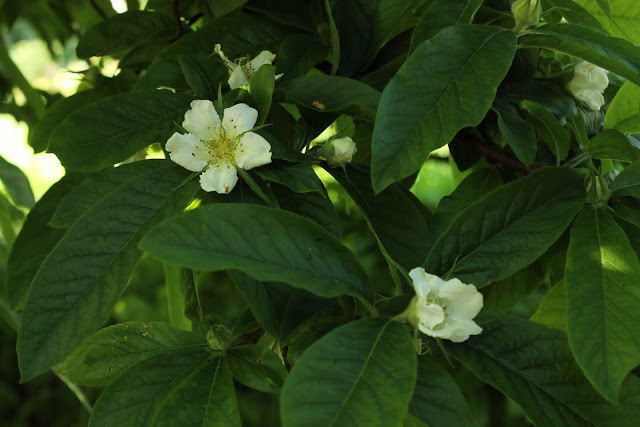 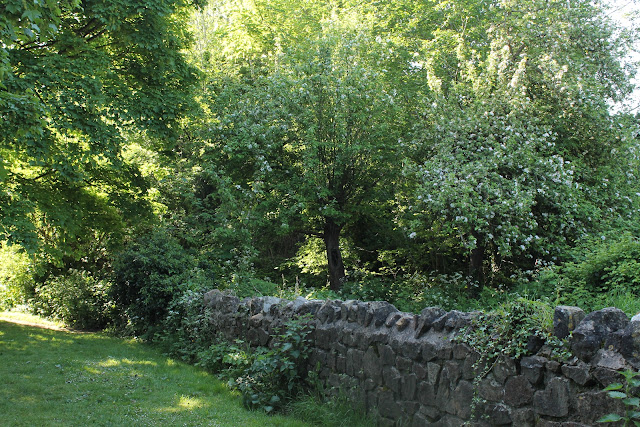 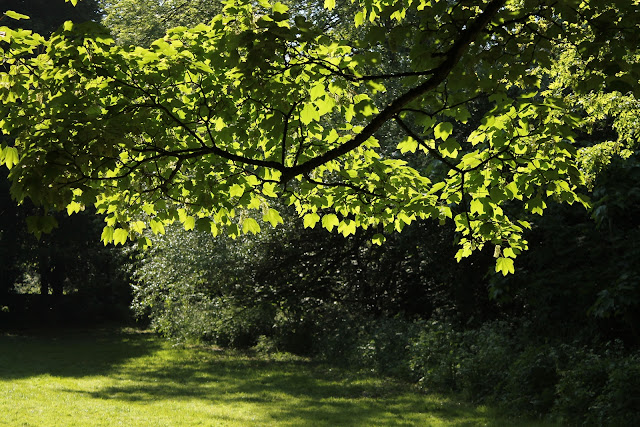 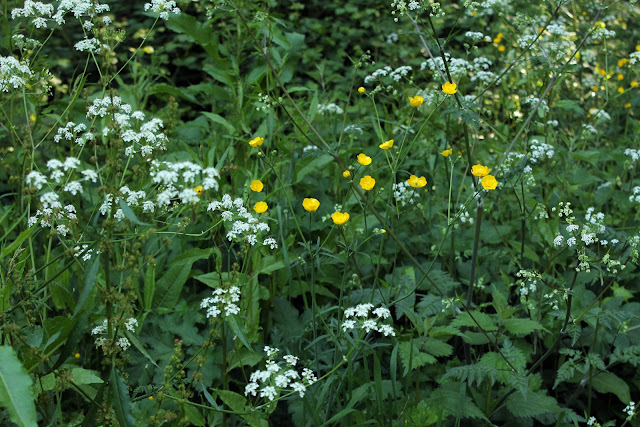 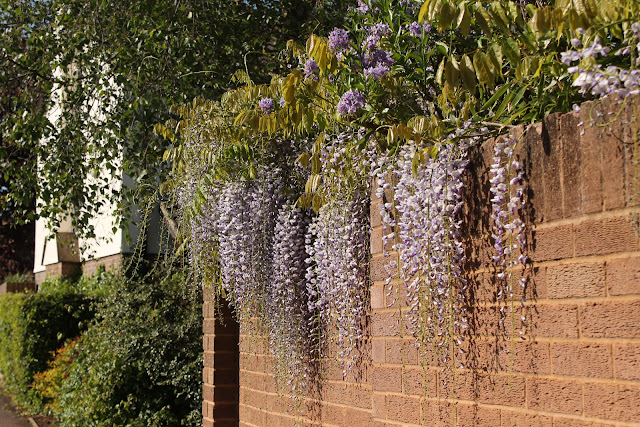 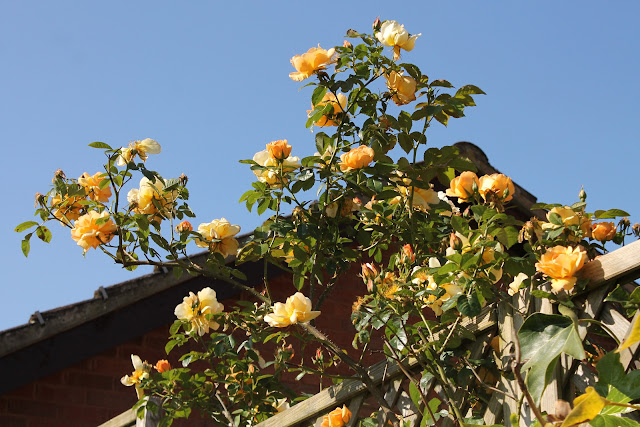 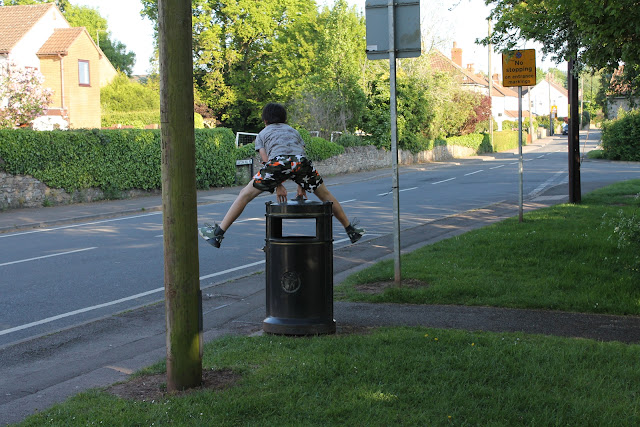 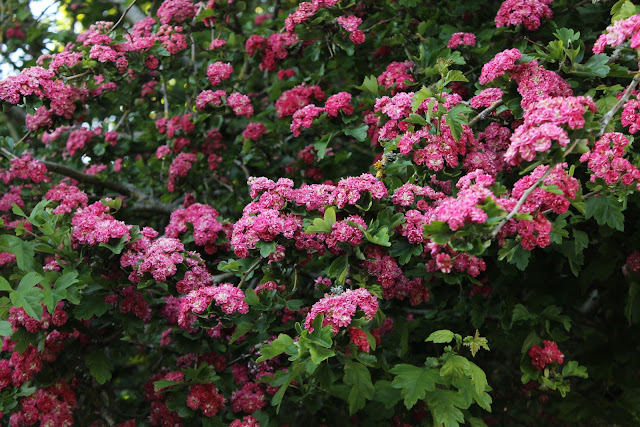 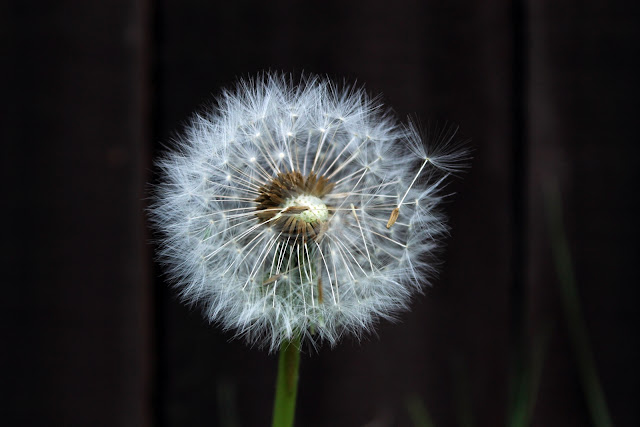 Greetings friends, I hope this finds you well. It's like summer here, long, warm, sunny days, light evenings, roses blooming, so many roses, and garden picnics everywhere. VE Day was lovely I thought, despite everything. There's a lot more interaction between neighbours these days which is nice.

Lots more gardening time for many people too, I've been loving dog walks around the place, admiring front gardens. The local garden shop has managed to stay open and it's doing good trade in everything.

The blue tits in the nest box have babies and are busy, busy, busy whipping about the place finding little juicies for them to eat. And the other evening the middle boy and I stood in his room at the top of the house watching and listening to a blackbird on a neighbouring aerial, singing his heart out.  After a while, another blackbird flew to an aerial over the road and joined in. The sun was setting and it was absolutely magical. Although of course they were probably yelling things like, 'Put one feather over my side of the street and I WILL BREAK YOU' and 'Come on then if you think you're hard enough.'

Did anyone read that piece on the BBC News website about how well honey production is going in France? I just tried to find it again to link to it, but I couldn't locate it. But apparently bees are producing masses more honey during lockdown than they usually do. The beekeepers think it's because spraying of 'weeds' with chemicals to kill them has stopped, so there are more flowers. Also there's less pollution than normal. It was lovely to hear, and I hope that somehow chemical use can be reduced in the future. At least now they have evidence of one of the benefits.

Has anyone tried a home haircut yet? The urchins' barnets are heading out of control. I have dog-grooming scissors and I've volunteered my services. No takers yet, but it's only a matter of time. I reckon I'll crack the littlest boy first. He has fine, floppy hair that hangs down and it's pretty much in his eyes now. The other two have curly wiry hair that grows straight outwards, so it's not quite as annoying and providing they don't look in any mirrors they're fine.

And then there's the dog himself. Persuading him to sit still will be the trick. There are only so many sausages you can hand out at a time. I've seen the occasional dog who has had half a haircut for just this reason.

Everyone is still into magic around here. Coins have been introduced alongside cards. The middle boy turned a big clump of dust into a £2 coin yesterday which was brilliant. He says he is keeping all the dust in his room and will gradually magically transform it into money. I'll let you know how it goes.

Look after yourselves my lovelies, I hope it's a good week for you. CJ xx
Posted by CJ at 09:57 17 comments: 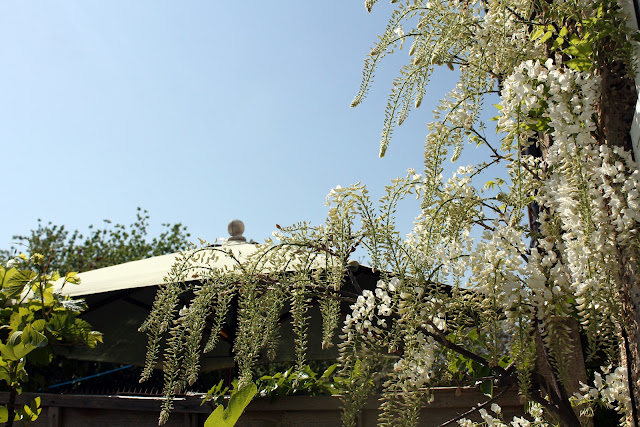 It turns out that the days have galloped past and I only have a single photo on my camera. The white wisteria, flowering beautifully this year.

The dog is still in his labrador-sized cone, lest he chew his itchy lump. The cockapoo size was too small, it turned out he could reach round the end of it so he has been banished into the big one. It doubles as a rain hood and sun bonnet.

The children are doing all the lockdown things. Magic is still big on the agenda and gymnastics has been added. Basketball is out of favour. Card games are in. March till September is quite a few months, no? But they are happy and getting on well together on the whole.

They've made the odd meal, which has been good. Just simple stuff, mainly salad for lunch and the odd cake. I wouldn't mind if they did more. Life skills and all that.

I did some work this morning then went into the sunny garden this afternoon and planted things. Spinach and radishes and spring onions and chard. Inside I have tomatoes, artichokes, courgettes and cucumbers. Then I sat in the sun with a good book. It was utter bliss for a moment, until the urchins discovered where I was. I shall aim for the same tomorrow.

I've been loving the lockdown walks. The weather's been so glorious and spring seems perfect this year. Maybe it's the good air and the knowledge that outside time is limited. The littlest boy and I have been walking in the golden evening sunshine, admiring all the pretty front gardens. Maybe everyone is spending a little more time on them than usual. He climbs trees and does parkour and I drag the dog around. He's slightly reluctant at times (dog, not boy). I'm hoping it's just because of the cone and not some sort of early-onset laziness.