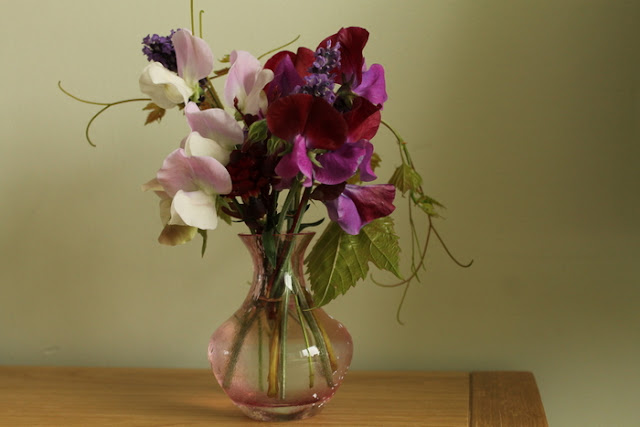 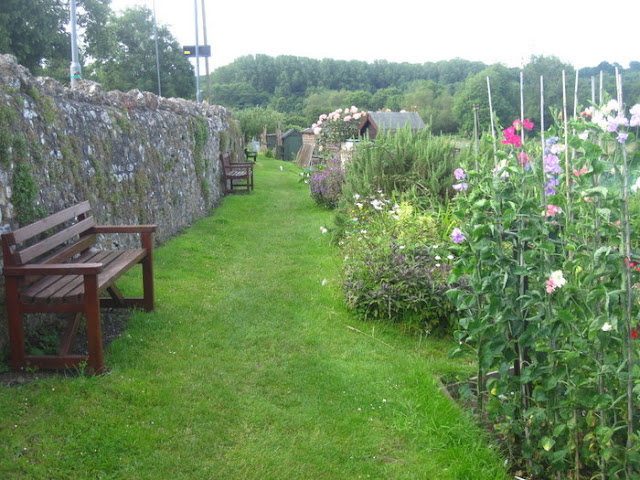 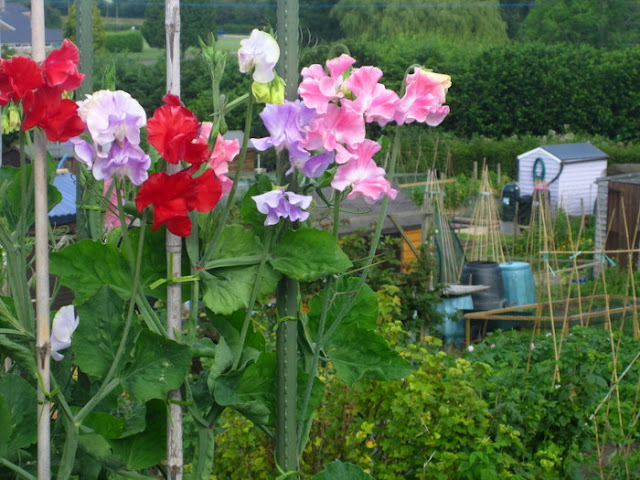 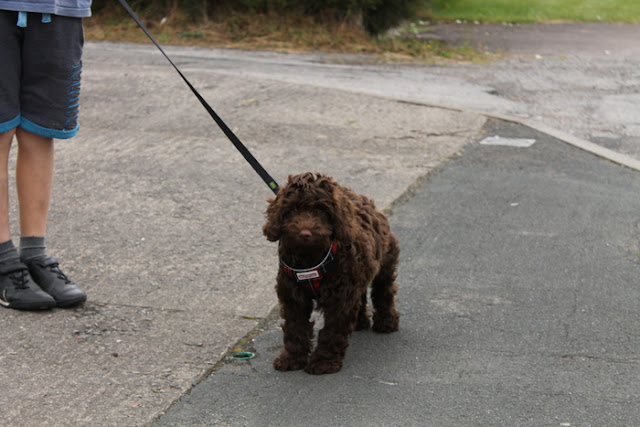 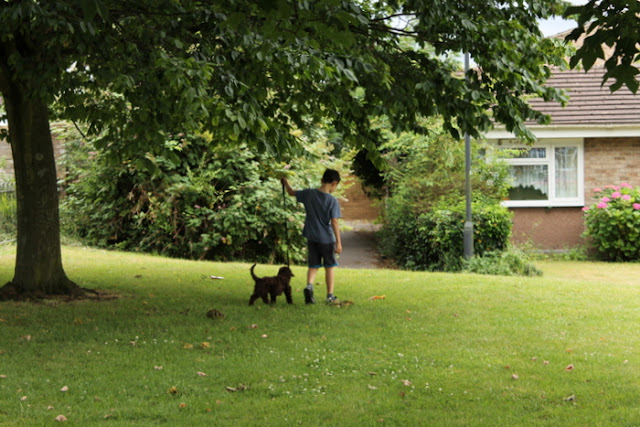 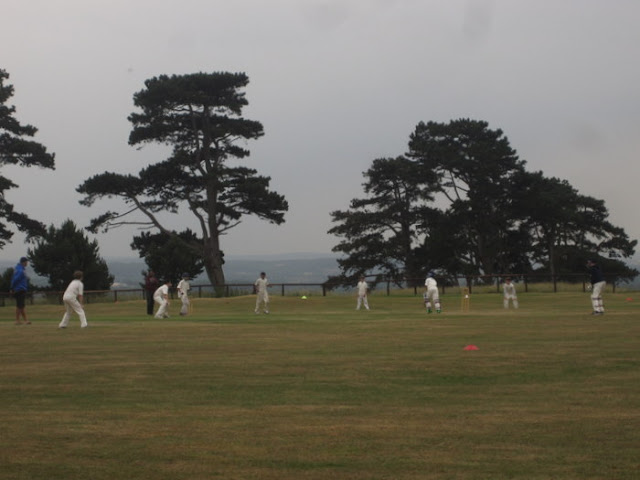 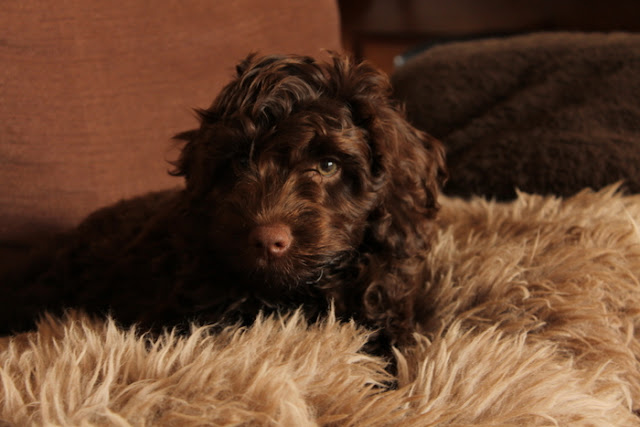 It's felt like the onset of winter today. Okay, maybe a slight exaggeration, but I did have to wrap up in several layers this morning and right now I'm seriously considering a hot water bottle. Summer was glorious though wasn't it. The sudden plummet in temperature has made me feel a bit peculiar though. Should I be knitting? Laying down fat for winter? Or replacing the flipflops that the dog destroyed? Maybe all three to be on the safe side.

The cricket season is pressing on at full throttle. I'm quite enjoying it in fact. I take a chair and have a nice read for half an hour while they warm up or mill around or whatever it is they do before the match. Then I stare into the middle distance and clap from time to time and listen to the internal voices. All very calming. It does go on and on though.

A dog savvy friend came round yesterday and within minutes had Bertie doing exactly what she wanted. It was poetry in motion, honestly. She was the alpha dog and he was bottom of the pack. Turns out the key is a firm hand and a bag of goat's cheese cubes. Of course it's not quite successful when I do it, and the rest of the family all have their own thing going on, so it can be a bit confused with occasional shouting (at each other, not the dog) but for one glorious moment there I thought, I can do this, I AM alpha dog. Well, we'll see.

He was officially allowed out today, so after school the littlest boy and I took him for a spin round the block. It went better than I imagined it would, Bertie was actually keen to keep going in the same direction most of the time. I managed to let the littlest boy have the lead the whole way round despite being in a state of total panic that he would drop it and that would be the end of it all. Brownie point for me I think. I am still very anxious about it all. No doubt I will wake up at 4am imagining the worst. What is it about 4am? The very blackest of thoughts emerge don't they? I try very hard not to give them head space and go to an imaginary happy place instead. Goodness, am I sounding slightly barking today? I have a feeling I am. I think I have a cold coming, plus going from summer to winter in the space of three days has all been very discombobulating.

How are you faring? Those of you in sweltering corners of the world should head for England instantly, it is all deliciously cool here. I'll get the kettle on. CJ xx
Posted by CJ at 21:59 26 comments: 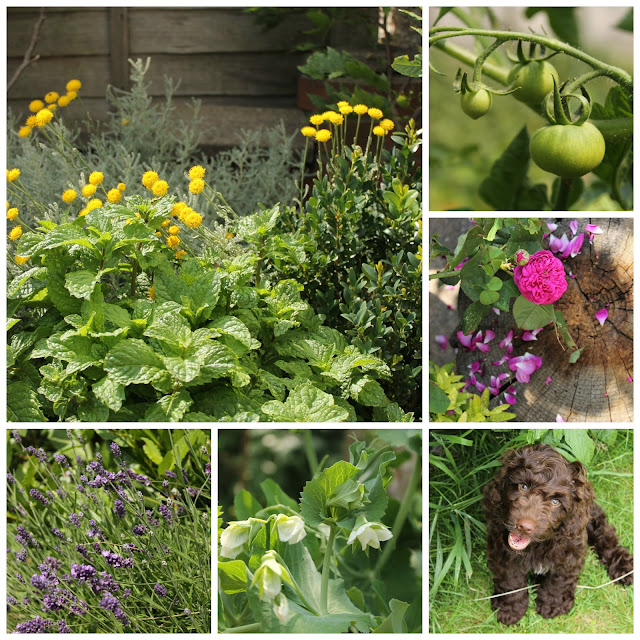 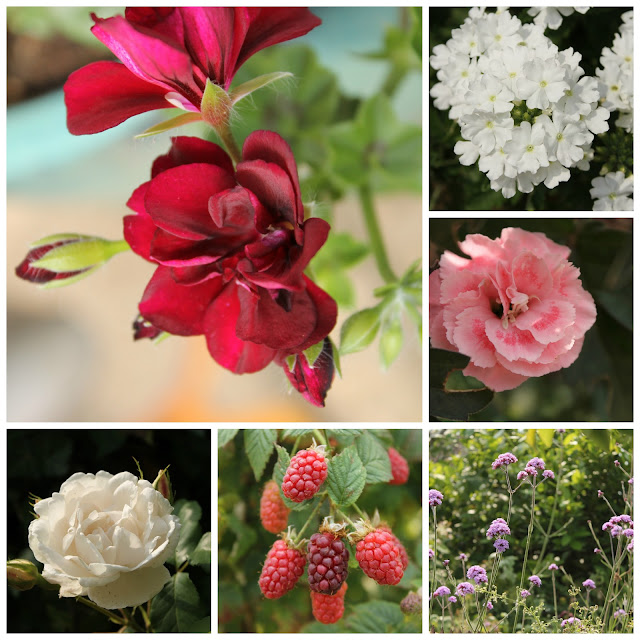 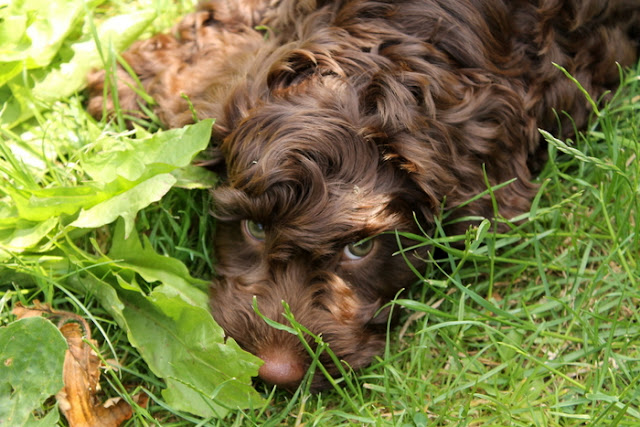 I'm taking a deep breath as I sit down to chat to you. Dog ownership is a thing of ups and downs I'm finding. But right now he's asleep. In a highly illegal spot on the sofa, but I am ignoring that for the sake of a little peace. You will of course recall how fond I am of a little peace. The sofa he is on is dark brown, with a mid-brown sheepskin on it (called Larry). Bertie jumps on when he thinks no-one is looking and flattens himself out in the middle of Larry and concentrates on being invisible. He looks up just by moving his eyes, not his head, all the better to remain undetected.

He is incredibly bitey, and his favourite person to bite is the littlest boy. We have tried all the things you are supposed to do: yelping - we really have perfected our yelps - standing like a tree or alternatively going limp. The biggest boy and I laughed so much one evening trying to go limp as a small rabid dog tried to tear us limb from limb. He was growling and shaking and sinking his teeth all the way in and I was yelling, "Go limp, just GO LIMP!" I don't remember the last time I laughed so much. I have a feeling it was verging on hysteria.

Being a tree is occasionally successful, but the littlest boy is unable to stop himself from backing away and trying to pick his feet up out of the way. Of course this is the most exciting thing possible to Bertie and he attacks all the more. This morning he tried entertaining him in the garden by blowing bubbles - a suggestion in his Puppy Training For Kids Book. Bertie bit his ankle and he promptly tipped the entire pot of bubble mixture all down his pyjamas. I thought it had gone over the dog for a moment and had visions of having to rinse it all out.

Anyway, it's hard work, but I'm sure you all know that already, you don't need me to tell you. I have not been the most patient person. I am feeling slightly fraught by the fact that I don't seem to get anything much done each day, and it's making me feel a bit overwhelmed. Oh, it will pass, I know, and I shall miss his giant-pawed puppiness when it's gone.

I drafted in the biggest boy to water the garden for me this evening. After he had finished the earth was still completely bone dry. Sigh. It's been done properly now (middle boy) and some small semblance of order is fleetingly here.

Are all enjoying the summer weather? I particularly like being able to be outside first thing and last thing without a cardigan. That doesn't happen often. Enjoy the rest of the week.
Posted by CJ at 22:08 32 comments: 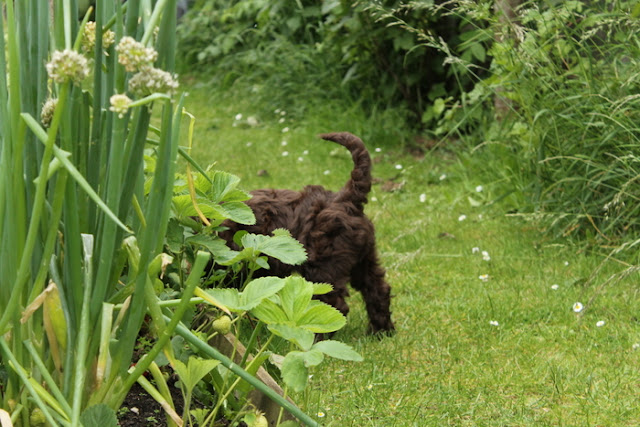 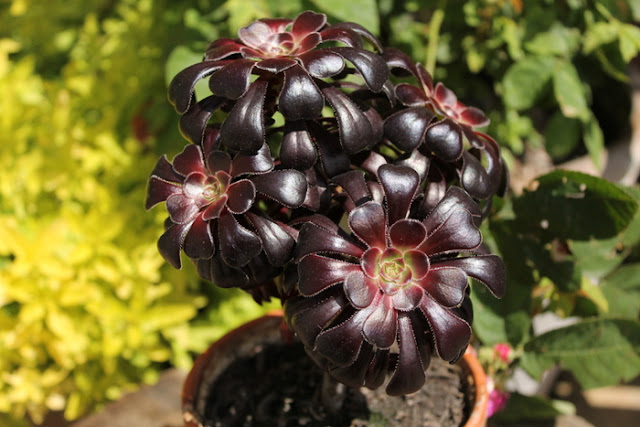 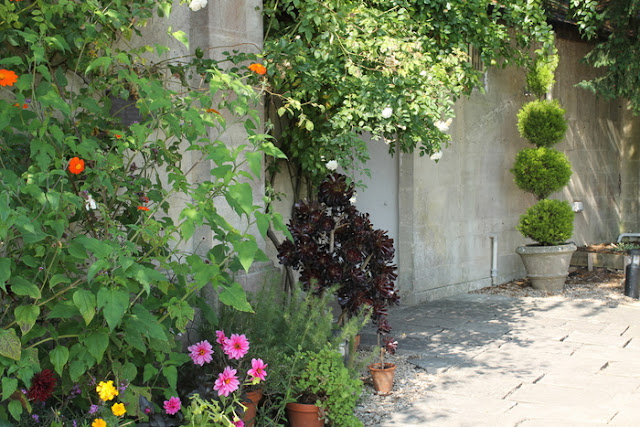 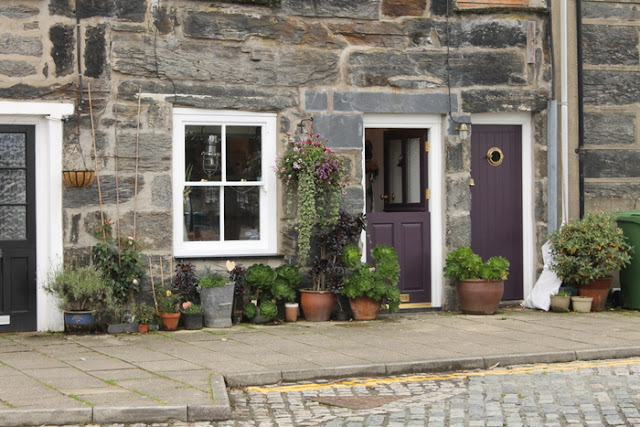 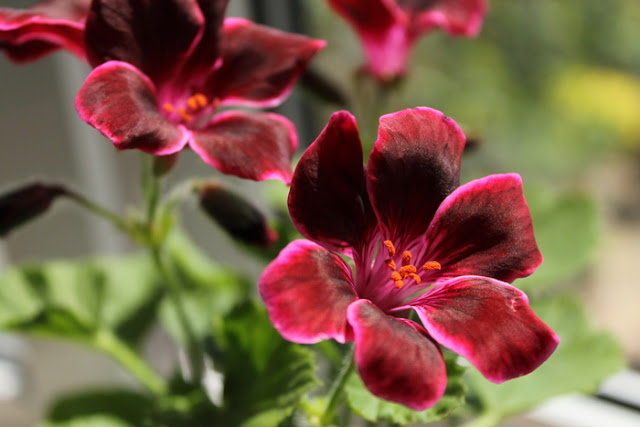 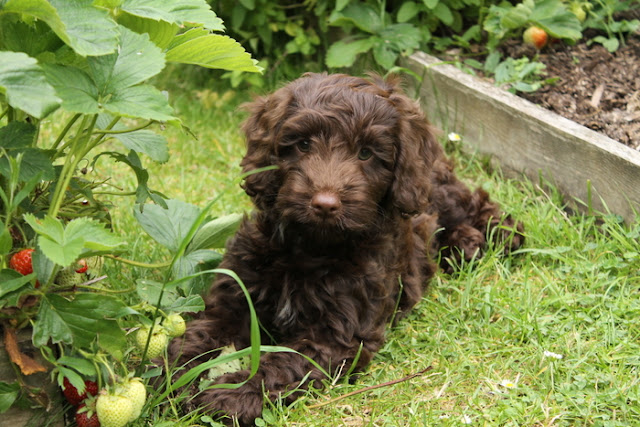 I hope all is well with you. Have a lovely Sunday. We'll be concentrating on not eating unripe strawberries and not biting small boys no matter how tasty they are. CJ xx
Posted by CJ at 22:21 24 comments:

Of petunias and rain 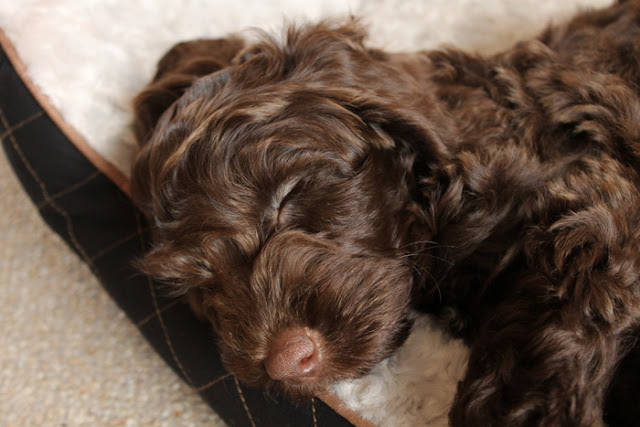 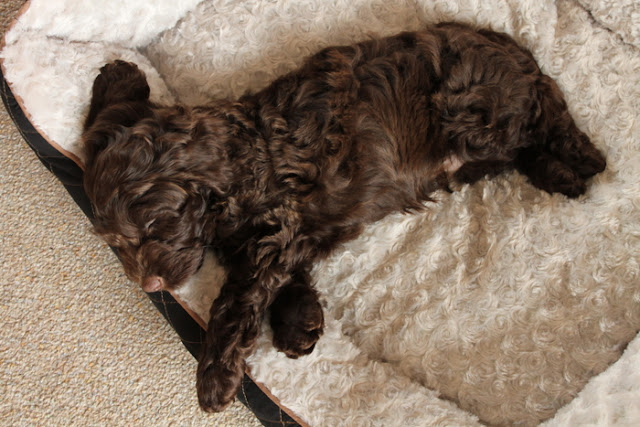 Literally all the photos I have for you today. I did have a lovely pot of flowers in the garden, but the rain has mashed them all down and somehow they seem to be half the volume now. I couldn't get the colours right on the camera anyway. A really dark plummy dianthus, the deepest petunia, a dark geranium and some bright pinks too. Maybe it will all recover.

The small chocolate dog arrived in full force on Sunday. The littlest boy is oh so happy. He's named him Bertie. Amazing how one so small can be quite so dynamic. I like to come home in the morning after taking the children to school and make the house tidy and quiet and calm and eat my breakfast and sit down at my laptop with peace and order all around. I REALLY like peace and order. Oh well, no doubt I'll adjust.

House training is not going well. The handbook says I should stand outside and wait. Bertie and I aren't really keen on that bearing in mind the torrential rain out there. He ate a petunia instead and we ran back inside. Maybe we'll do better when the sun comes out. 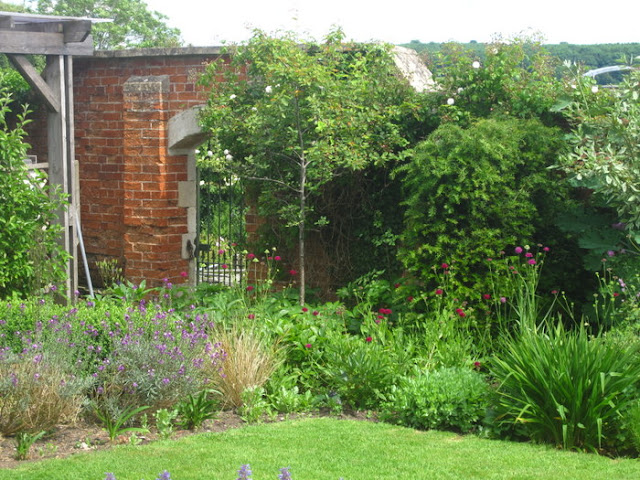 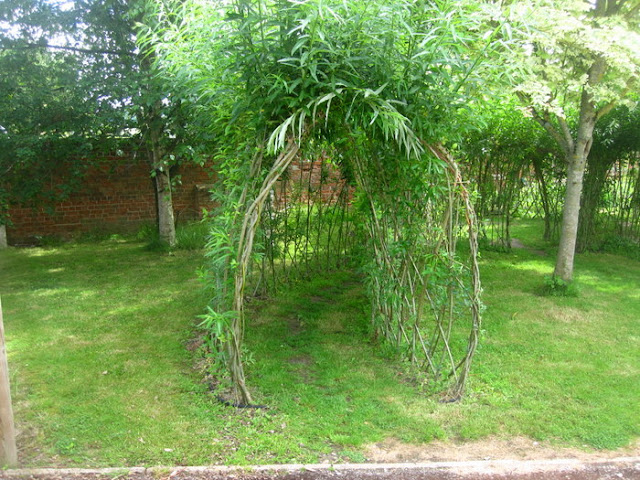 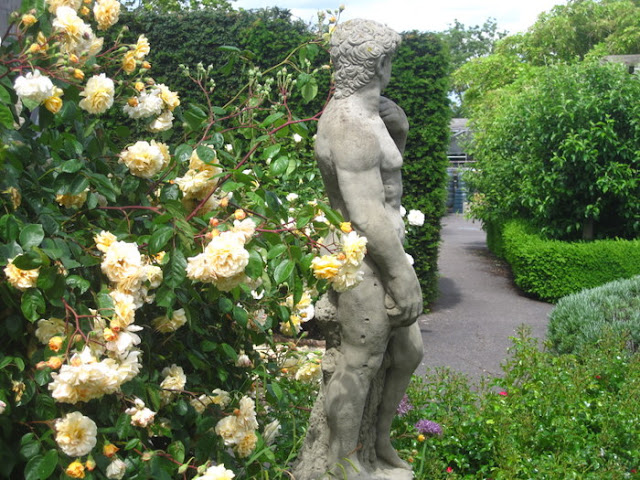 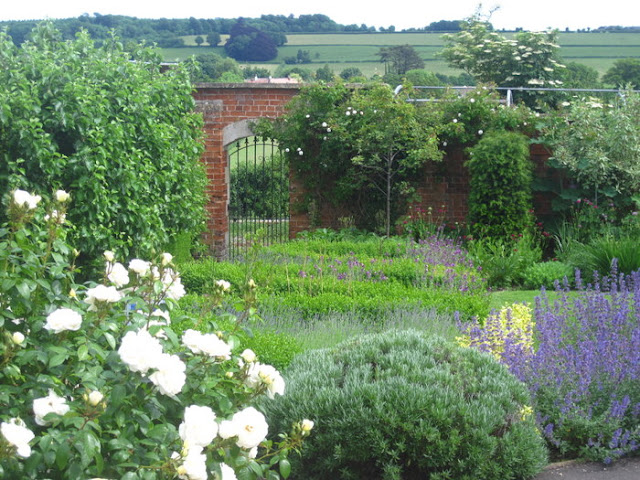 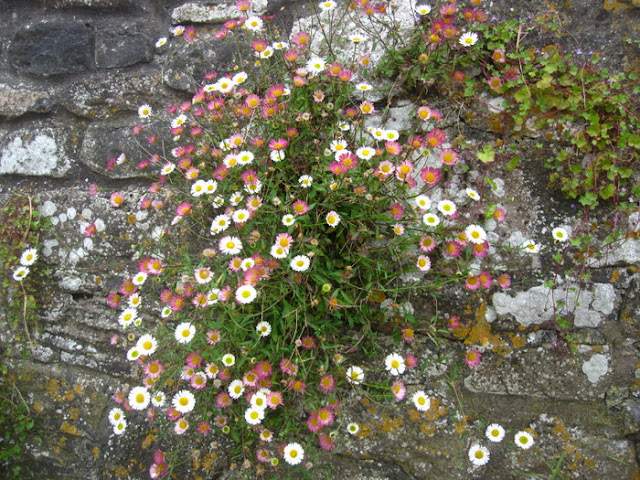 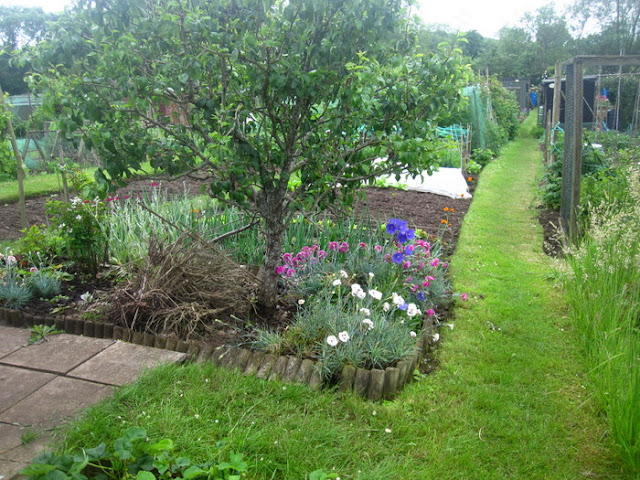 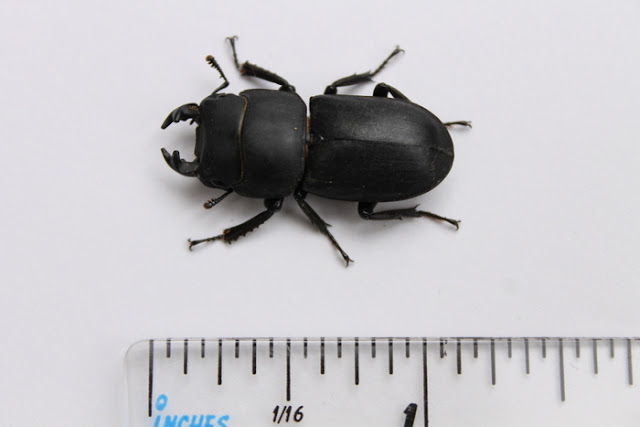 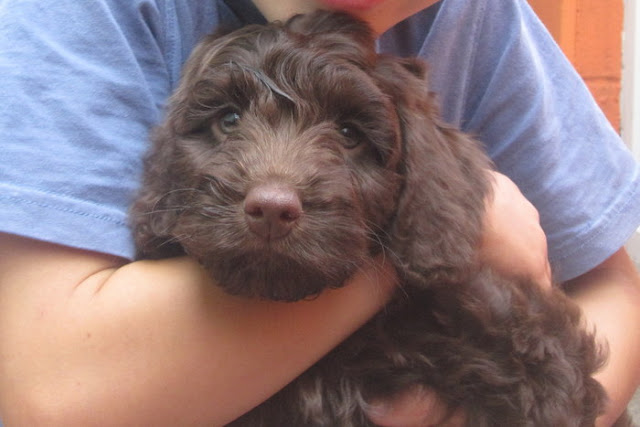