Lessons learned - one year on the allotment 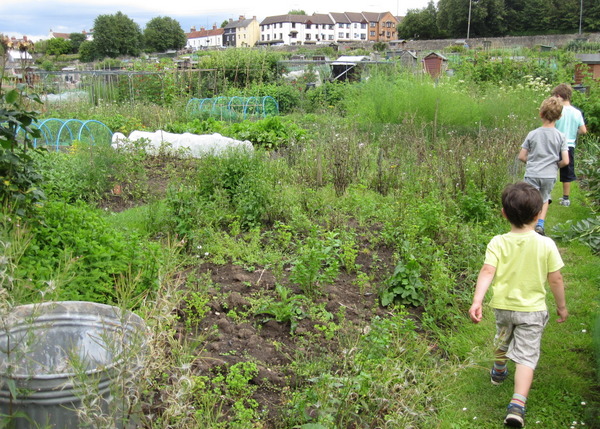 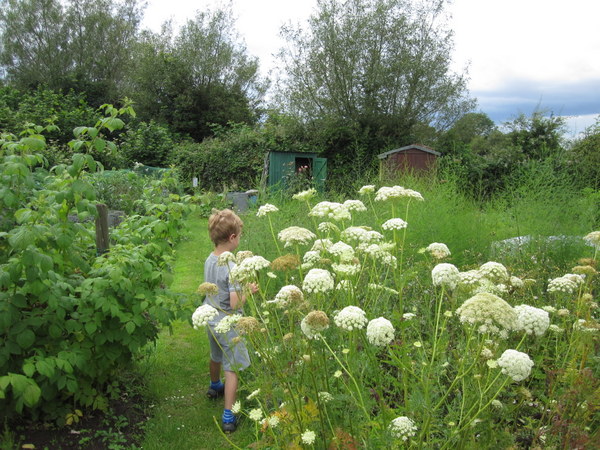 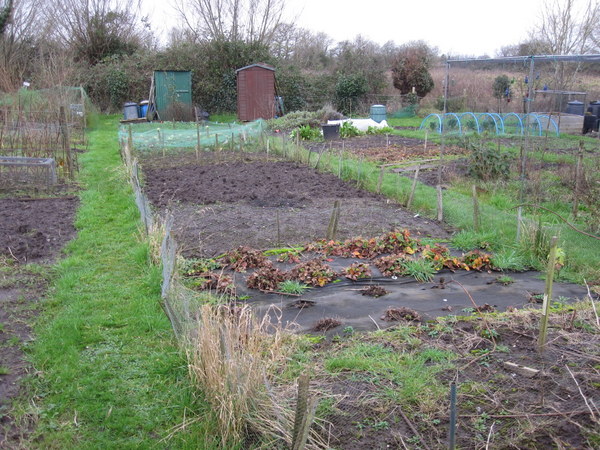 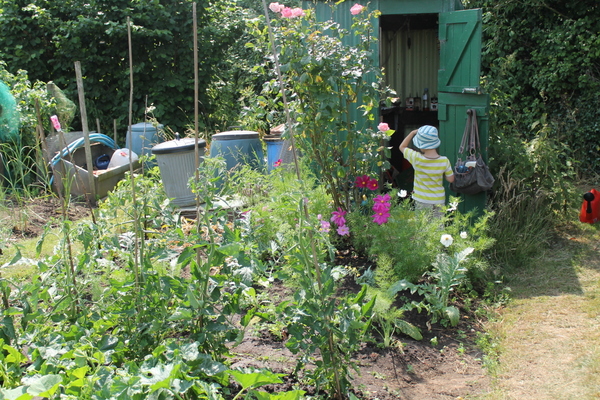 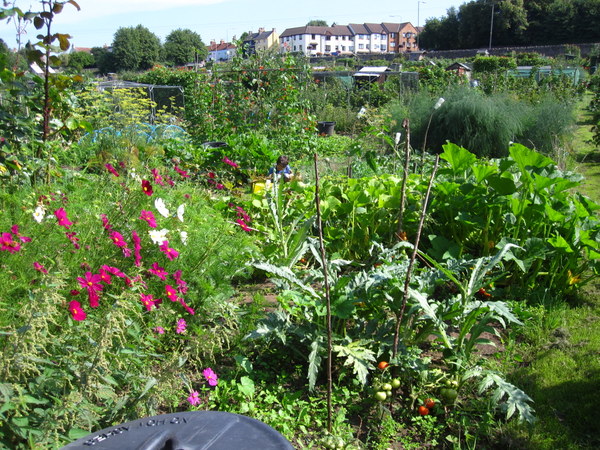 has meant quite a few lessons learned.  And it's also made me realise how much I still need to learn and no doubt how much I will learn every single year that I keep the plot.

The lesson at the forefront of my mind right now involves courgettes.  It's probably not the most important thing to know, but right now in the midst of a mad courgette glut, it's all I am thinking about.  No need to grow so many!  In fact, no real need to grow any at all.  This is a typical day at the "Free Stuff" place on the allotment site. 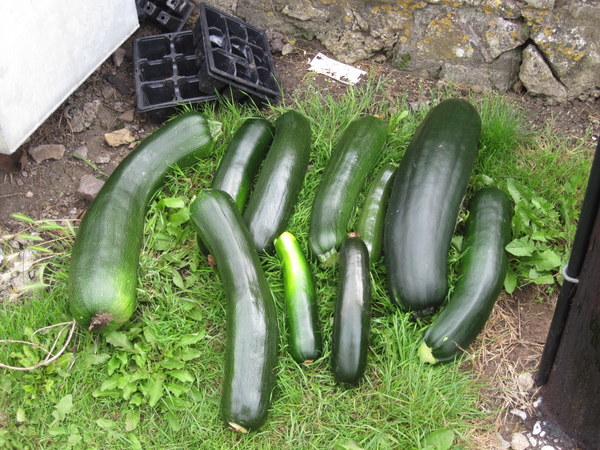 Homeless, unwanted, unloved courgettes.  I probably will still grow some next year, maybe yellow ones.  This year's glut has come almost exclusively from one plant of Romanesco.  Three or four courgettes every time I visit.  Courgettes lined up in the fridge.  Courgettes in every meal.  Main course and pudding.  Courgettes in the freezer.  You get the picture. 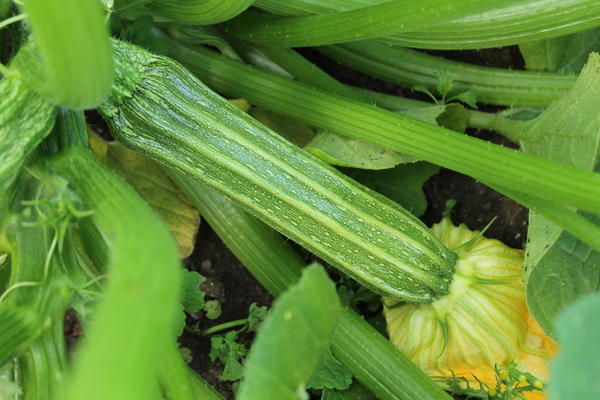 I also learned from the courgette adventure that spacing is quite important.  At home the soil is appalling and usually things don't grow much at all.  At the allotment the soil is amazing and everything grows like the fairy tale beanstalk - on and on and on.  So putting seven cucumber plants, three courgettes and about eight squashes into a space about 3m square was, as it turns out, utter madness.  It's impossible to see anything or to access anything.  Under the leaves there are dozens of lumpen shapes lurking in the darkness quietly growing to the size of zeppelins. 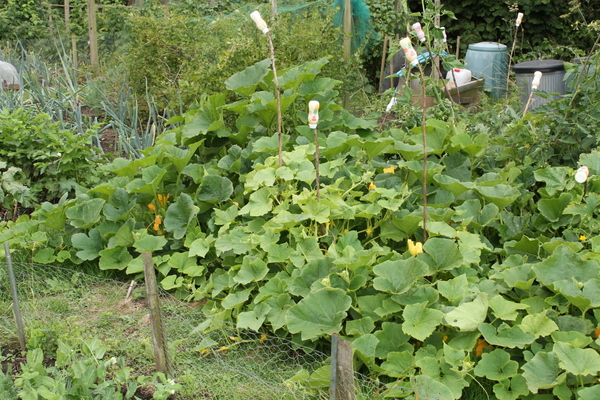 And I've discovered that there are two categories of squash.  Those that are quite dense and delicious and that store well so that there is food throughout the lean winter months, and those that are watery and must be eaten pretty much immediately.  It turns out I have mostly the must-be-eaten-immediately ones.  Next year I will be trying things like Queensland Blue and acorn squashes.

One good thing about such insanely dense planting is that the weeds have been kept down.  In fact it is the only part of the plot that doesn't disappear under a green carpet on an almost weekly basis.  When I took over the plot it was overgrown with tall seeding weeds (and short seeding weeds) so clearly this year was going to be full of weed seedlings.  I have tried very hard to make sure nothing seeds this year, so I am really hoping that next year things will be better.  Weeds are definitely the bete noire of most allotmenteers.  I found that during the try spells hoeing was the answer.  Quick and easy and very satisfying to see them all wilting in the sun.  I left them on the surface a la Bob Flowerdew.  He says they are like a little mulch, and will ultimately break down.

But hoeing isn't so effective when it's damp, and it doesn't work at all for those deep-rooted pernicious things.  They require hand weeding, and lots of it.  There is no substitute.  It's just a question of putting aside the time and getting on with it.  When it's done it's wonderful to stand up and look at the bare earth.  Assuming you can still stand up.  It's fair to say there's been some backache this year.

I've also discovered that carrots are one of the trickiest things to grow.  Even if they germinate (not a given, sometimes they don't bother), whole rows can disappear overnight.  And those that remain are fair game for rabbits and carrot root fly.  They may well be one of those things that I just don't grow.  Which is a shame as we eat mountains of them.  But I am thinking that it's best to grow the things that aren't too difficult and that either taste better fresh or that are out of my budget, such as asparagus, which was great and for minimal effort.

Which brings me to fruit.  I inherited some enormous gooseberry and blackcurrant bushes and for no work at all I've had enormous harvests.  Fruit is definitely the way to go.  I'm planning a big strawberry bed for next year.  Bob is in agreement with this.  And to keep the weeds down I'm going to try and plant them through weedproof membrane.  He does that too.  I've said it before, I'll say it again, Mr Flowerdew and Sarah Raven are informing most of my decisions when it comes to growing to eat.  They have tried it all themselves and have an absolute wealth of knowledge.

A lesson learned from all of that fruit is that the most important thing to do at the allotment is harvesting.  In mid and late summer it can take quite a while.  I like to save it until the end of my visits, as a treat for all the hard work.  But sometimes it can take pretty much the whole of a short visit.

I am quite often at the allotment for about an hour in the evening while other half goes to the putting green at the golf club next door.  I have assorted children with me, and it is easy to potter around doing little jobs and not get to the harvesting in time.  But really, harvesting is the raison d'etre of the plot.  If I don't pick everything at its maximum freshness it's a waste.  And similarly once it's home it must be dealt with in one way or another fairly quickly, even if this just means freezing the excess. 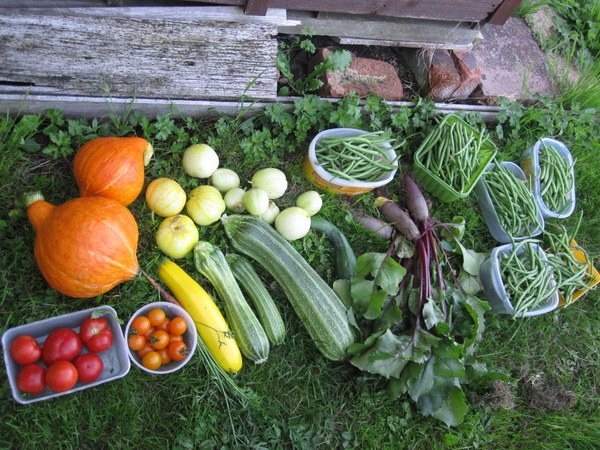 Finally, I have worked out that the soil is key to absolutely everything.  To grow a plant that is strong enough to withstand a few pests, the soil must be good.  The soil at home needs work - I'm not really sure what at the moment, as I've added manure in the past which really hasn't made much difference.  But the wonderful soil at the allotment will also need care to keep it so productive.  At the moment all of the different organic additions and fertilisers are a bit of a mystery - what to add, when and why.  It's something I will have to learn.  With a very limited budget I am hoping that the allotment site will get a pile of free manure in next year as they have in the past.

So it's been a year of learning and a year of hard work.  But right now, as I take home a trug full of produce on every visit, I have to say, it's worth it.
Posted by CJ at 06:44