How long was I away?

I went to the allotment last night for the first time in a few days - well, almost a week I think.  Back  in spring I planted an area with squashes, courgettes and cucumbers.  At home the soil is so poor it's a miracle if things take off at all.  But at the allotment the soil is utter perfection, and everything grows like the devil.  The squashes, courgettes and cucumbers have gone absolutely mad.  It's impossible to step between them, they are all completely tangled, and if you look under the leaves it is a terrifying sight. 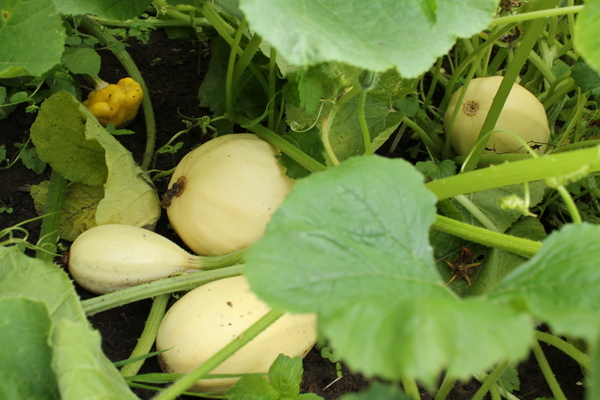 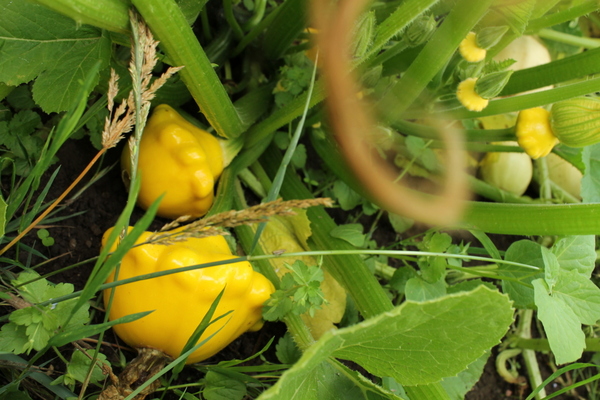 Squashes, courgettes and cucumbers everywhere.  Now I know that this is the whole point of an allotment, but I should just mention at this point that I am the only one who really actually likes squashes and courgettes.  I can slide some onto smaller people's plates, but only in limited quantities.  And the other half will only put up with them up to a point.  And judging by the above, that point will be reached fairly soon.  I've already done them sauteed in oil, soup, curry and roasted.  In the past three days.  And some of the squashes are spaghetti ones, which the other half will refuse to eat if he identifies them.  I was hoping that he wouldn't notice the odd bit, but I have a feeling that if he has it every day for two months he may well twig.  Any recipes for spaghetti squash gratefully received.  I'm thinking I may be able to pass them off as noodles.

In my defence, had I planted all of the above things at home, I would have been lucky to get half a dozen courgettes.  But the plot is wonderful.  Before I had it, it was tended by the same man for 45 years.  It amazes me that before I was born, and for the whole of my life, the same person has been there growing things and improving the soil, year in, year out.  For a long time it was an award winning plot, in the site competitions.  Towards the end things were harder for him I think, but I still count myself very lucky to have inherited such a gem.  The soil is exquisite, and everything grows beautifully.  Unfortunately this does include the weeds.  And the courgettes. 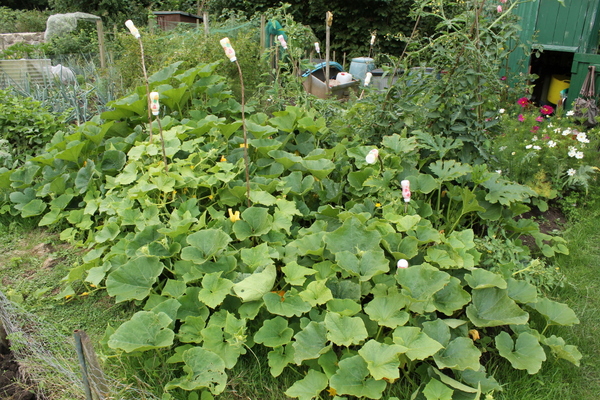 I put the biggest courgette in the space at the site where you can leave unwanted items.  There's quite often a few enormous courgettes lurking there, unloved and unwanted.  But they do always find a new owner.  Really, it's probably not necessary to grow your own courgettes at all, you could just adopt the strays. 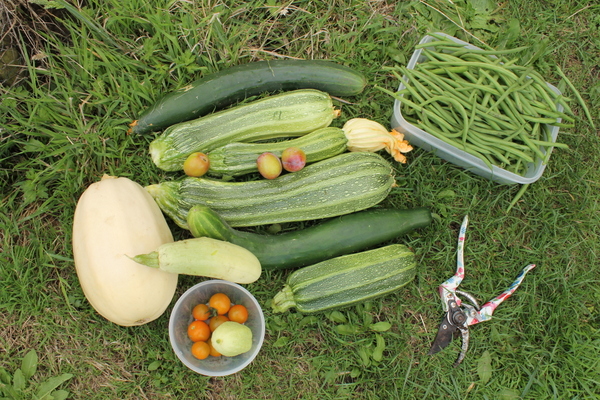 The things in the middle are plums.  A small branch was down, so I salvaged them.  Something had clearly been eating some of them.  I'm hoping there'll be a few left for me. 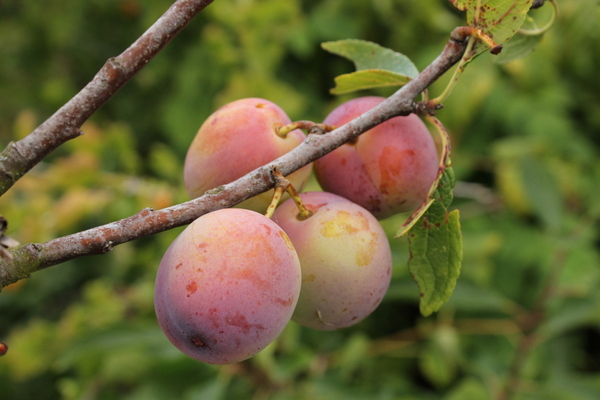 Elsewhere there are still mountains of blackcurrants.  The boys and I have de-stalked about six kilos so far.  If I close my eyes I can still see them.  I have discovered a delicious recipe though - blackcurrant Eton mess.  Cook some blackcurrants with sugar to taste, cool, then push through a sieve.  Crush a meringue, drizzle with blackcurrant puree and swirl through some whipped cream.  It's wonderful.  But the absolute top fruit dish I've discovered this summer has to be morello cherries with Greek yoghurt.  My neighbour gave me a tub of them.  I stoned them, cooked with sugar and then put them over plain Greek yoghurt and honestly, it was utterly divine.  Sometimes the simplest recipes are the best.  The ones where the fruit is allowed to shine. 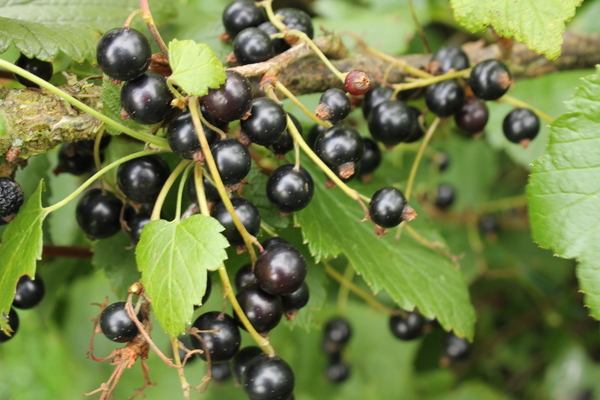 Elsewhere, tomatoes are swelling and ripening.  I always grow Sungold because they are so reliable outside.  I've had far more success with them than any other variety, including Gardener's Delight, and I've tried lots of varieties. 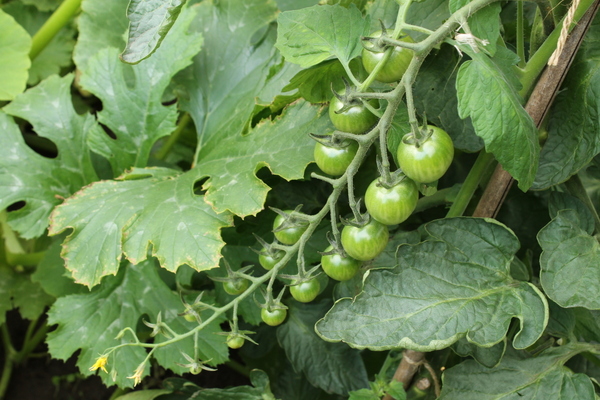 There are beetroots and a paltry amount of carrots.  Why are they so hard to grow?  I have a theory that a rabbit burrowed under the little chicken wire fence I have and ate the seedlings as they came up.  Something had definitely burrowed under the wire.  We like to think it was Benjamin Bunny and Peter Rabbit.  This is all they have left us. 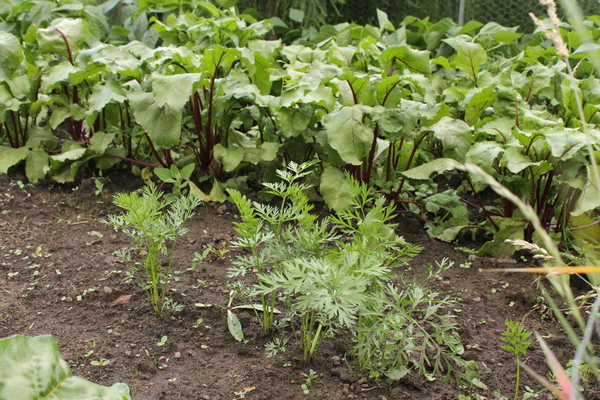 I took the littlest boy with me.  He entertained himself by cutting things down with a pair of scissors. 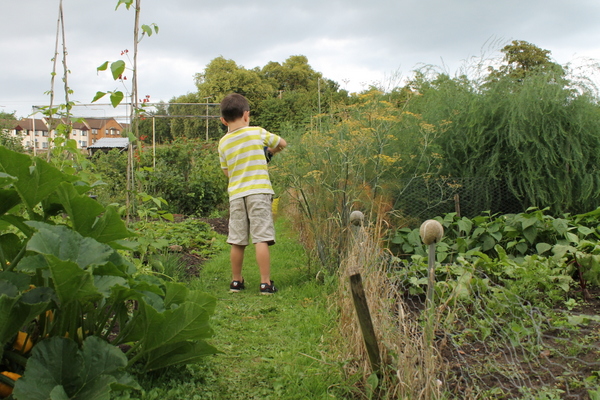 Then we pulled up the onions together.  I do so love having a little helper.  Maybe one day he'll grow onions for his little boys. 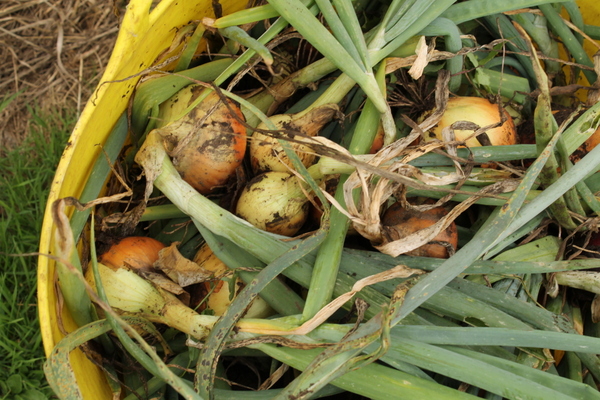 Along with the beans and carrots there are one or two fancier things. 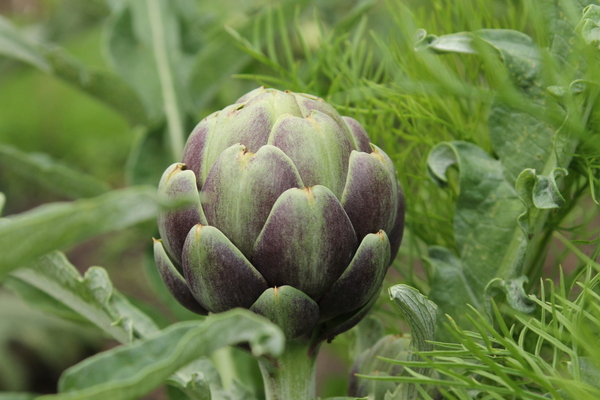 And a few flowers which have been very easy to grow and which I do so love to see on every visit.  The rose I inherited with the plot, and it really does flower from June until right at the end of the season. 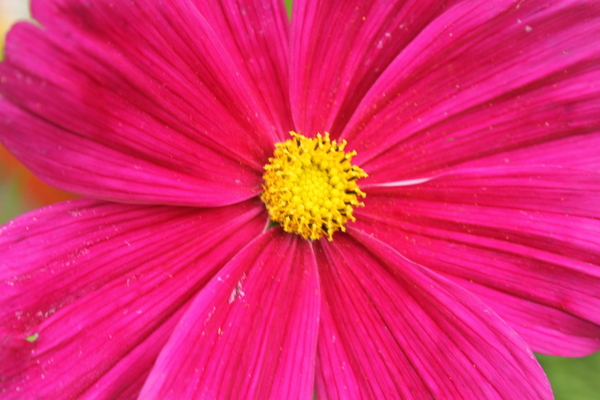 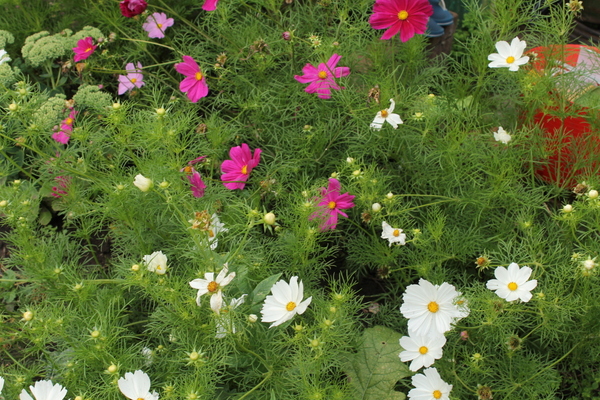 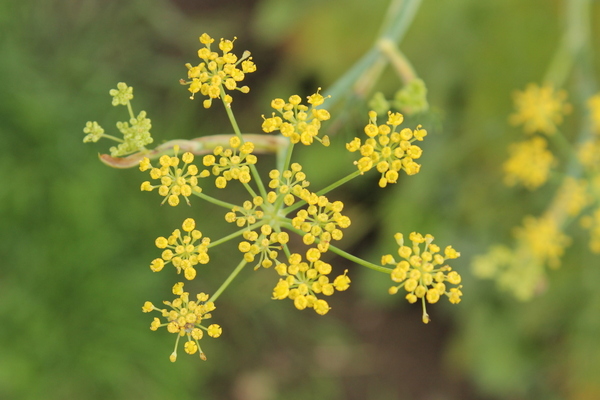 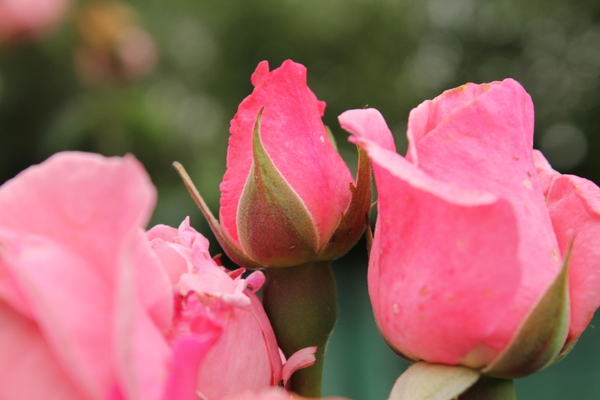 After a bit of a wobble I'm back in love with the plot.  It does still give me a few anxious moments, and I still don't know what the future holds but really, I would so love to keep it.  Maybe even for forty-five years...
Posted by CJ at 22:08