9.10am  The children are at school and order has been restored.  It's time to begin a little job I've been dreading for days.  Building a bed for the littlest boy from a flatpack, which has been delivered in no less than eight packages.

9.30am  The packaging is off.  It's no longer to possible to move around the kitchen because of the amount of cardboard.  The pieces are strewn about the living room, which is where the delivery man left them.  "Room Of Your Choice" was £20 extra.  Getting the thing made was £120 extra.  I'm starting to wonder if there's a reason for that.

10.00am  The nuts and bolts are sorted into about fifteen different dishes and labelled.  The actual instructions are disconcertingly brief.  One and a half pieces of A4.  I stare at them for a while and start sweating lightly.

10.30am  I carry some pieces upstairs to the littlest boy's room and do some more staring and some thinking. 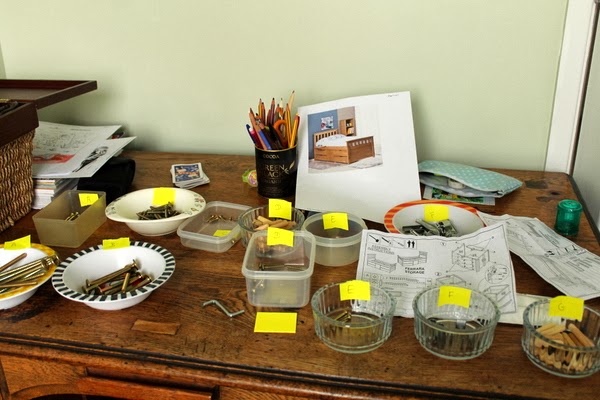 11.00am  I've partly put the ends together, but it's now apparent I've done it wrong.  I take them apart again and put them back together differently.  It turns out they're still wrong.  I take them apart again and mutter a bit more.  I put them together in another variation.  I should have added some more bits in first.  I deconstruct them and I'm almost back where I started.

11.40am  The phone rings and it's the school.  I'm not to worry, the children are fine, but the middle one has fallen on his face and broken his glasses.  He is now unable to see.  I locate his old pair and take them to school, collect the broken ones and once home ring the optician.  I love the optician, and I love how eye tests and glasses and replacement glasses for children are all completely free.  It takes me but a moment to order another pair.  A high point in the day I think.

12.10pm  I try and get back in the zone.  It is becoming clear that the littlest boy (whose existing bed had been taken apart and removed) will not be sleeping in his room tonight.  Oddly, he had anticipated this when I explained to him a day or two ago that I would be making a new bed for him.  He said something like, "Ooh, so I'll be sleeping in your bed for a night!"

Other half locates a video on You Tube showing how to put this exact bed together.  He also rings the company.  Astonishingly he gets to speak to an actual person, who is incredibly helpful and emails more instructions.  I watch the video.  It has soothing music, a calming voiceover and a woman with an incredible French manicure smoothly putting the bed together.  I breath deeply and unclench.  Things previously unfathomable have been explained and I feel a slight glimmer of hope.

1.10pm  I eat a two cheese sandwiches and then a peanut butter sandwich and some salad and a strawberry yoghurt and spend some time wondering why the manufacturer didn't bother mentioning the enlightening You Tube video in their instructions.  Just teasing us maybe.

1.40pm  I clear up from lunch and put everything flatpack-related where it will be out of the way of the children who will be home in a couple of hours.  The day has slipped by and so far I've accomplished almost nothing.  Back to the flatpack.

3.00pm  With the help of the video things are finally going together, although I still only have two ends and two sides.  It's a captain's bed, with four drawers and a cupboard underneath.  I know, I know, what was I thinking.  But when I was ordering it, it seemed like a really good idea.  Somewhere for the littlest boy to keep his treasures, because he does love his treasures.  I suddenly realise what the time is.  School run.

3.25pm  The littlest boy is out first, full of happy joy as ever.  The middle boy is a bit pink from recorder practice and with a slightly bruised nose from the glasses-breaking incident.   I explain to the littlest boy that his bed isn't finished.  He doesn't display any surprise.  I suggest he sleeps on his mattress in the top room with the guinea pigs, and point out how it will be exactly like camping.  He is thrilled.  We head home and I make drinks for all.

4.00pm  The phone trills and I panic, football officially ends at 4 and I'm still at home, because it always goes on until 4.15pm.  It's a text from school.  Year 5 parents (of which I am one) are reminded of the Year 5 cake sale tomorrow, to which their children are to bring cakes.  Wha...???  I check the calendar.  No mention of a cake sale.

4.10pm  I wait at school for ten minutes for the biggest boy.  He's the last out, as always, and in a foul mood.

5pm  Tea is fast and early-ish as I need to take the middle boy to buy a warm coat.  He's been off colour recently and unusually is feeling the cold.  He's been shivering all the way to school in the mornings.  His thin coat isn't enough.  After tea I manage to take him to the shops without his brothers, who for some reason are desperate to come too.  I make a mental note - next time I need them to come with me I must try and leave them at home.  We find a good coat and I part with a good chunk of money.