While everyone was busy playing football in the garden yesterday I popped out to the recycling centre and to pick up a couple of groceries.  And while I was at the supermarket, I couldn't resist a quick trip over the road to the allotments.

The sun was about to set, I had the whole site to myself, and honestly it was a magical moment. 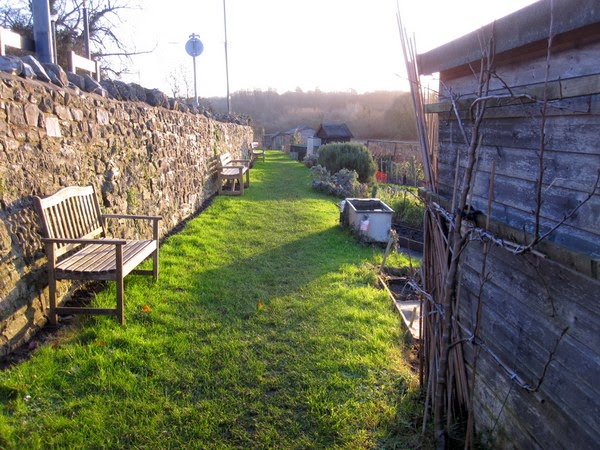 This is my plot, from the marker down to the green shed and the hedge at the bottom.  And how different (and manageable!) it looks in deepest winter.  Everything is stripped back to the bare bones.  I stood for a while remembering what it was like in midsummer.  The first area there, with fruit bushes and raspberry canes, was almost inaccessible.  Where has it all gone?! 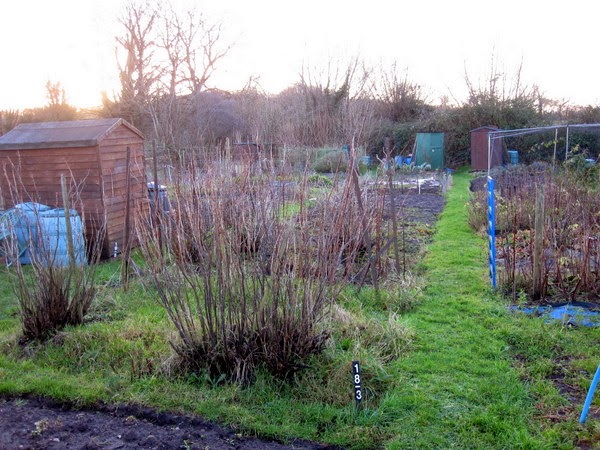 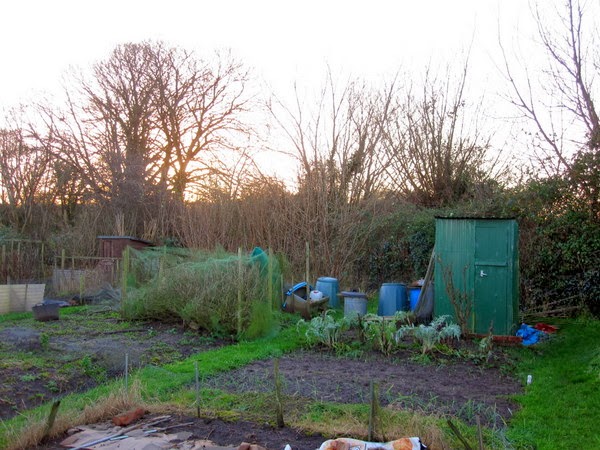 I was thrilled to see that the elephant garlic had come up.  It's fairly expensive, and last time I was down here there was no sign of life.  It was an ebay purchase, grown on someone else's allotment, and I only have three cloves, so I'm glad it's looking good.  I've not tried it before, but I think it's supposed to be fairly mild. 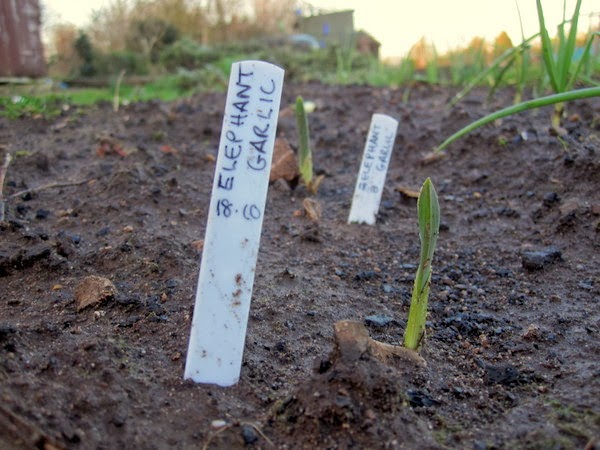 Just up the path there was an upended fruit cage.  The weather's been fairly stormy here, with high winds and driving rain.  I'm not sure where the cage came from, so I left it where it was.  I wasn't really wearing allotmenting clothes either! 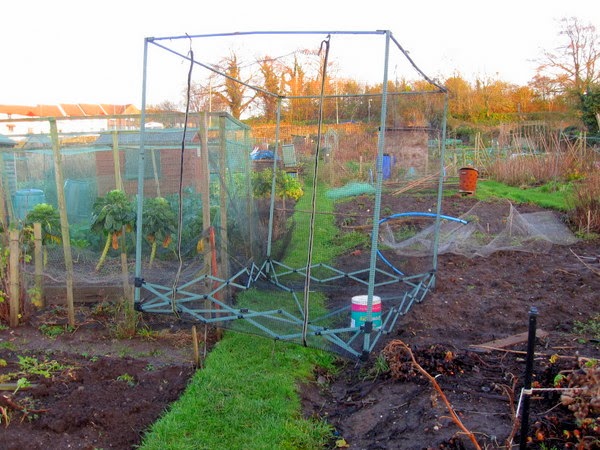 Sunset.  It was so still and peaceful.  A million miles away from noisy New Year's celebrations and crowds and stress and traffic jams.  I didn't forget to be thankful. 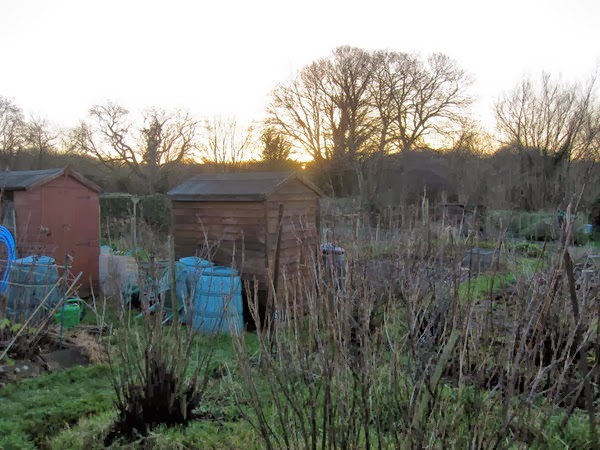 This is the boys' and my favourite shed.  So pretty! 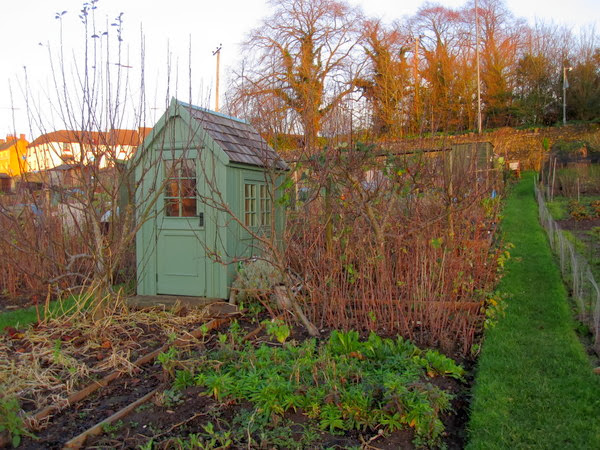 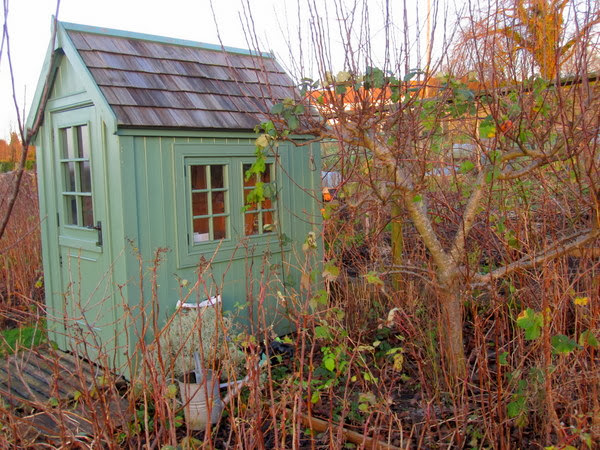 The last of the sun was hitting the stone wall at the top of the site.  A good shed, a water butt, a rusty out-all-year chair.  Allotment perfection. 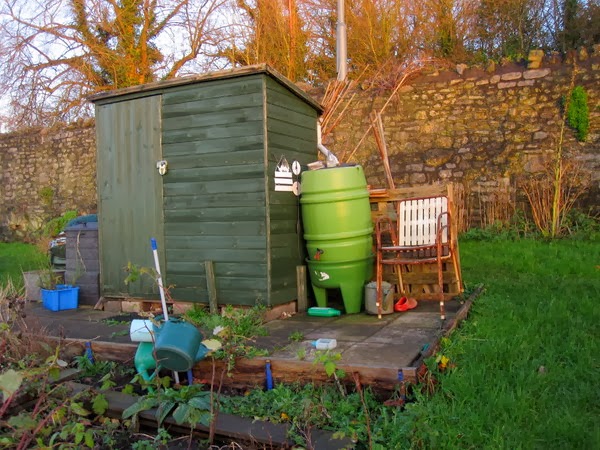 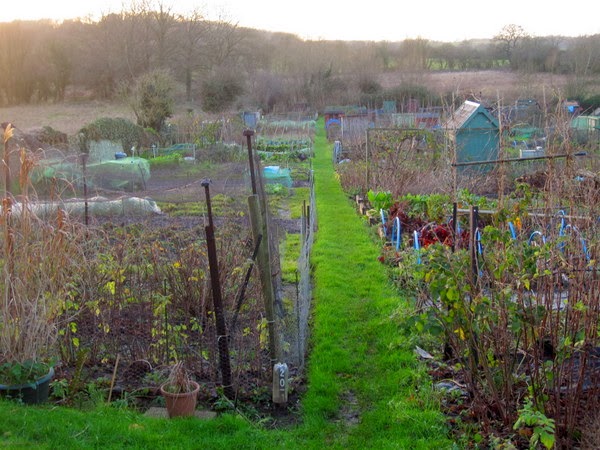 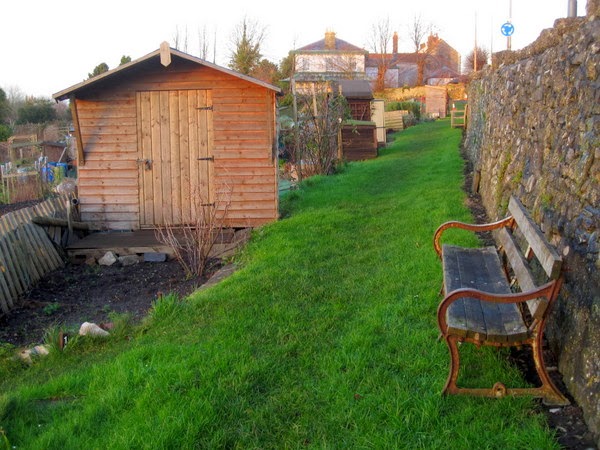 I like how close everything is in our little town.  You can just see the church from the top of the site here, to the left of the big evergreen, a short walk away down the high street. 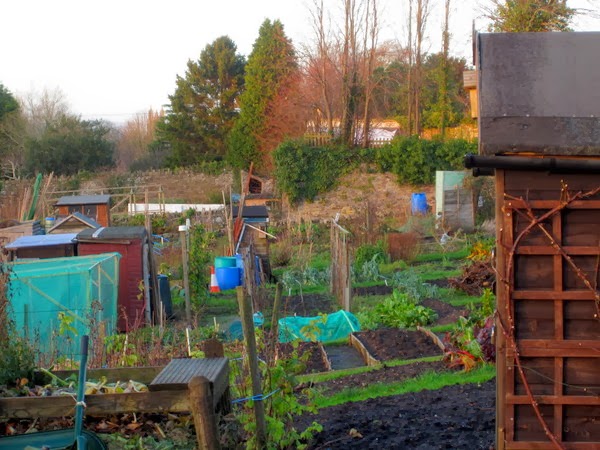 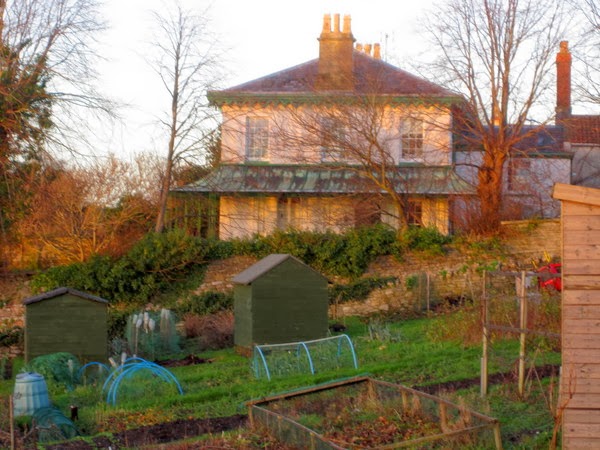 On the way out I saw this amazing plot. 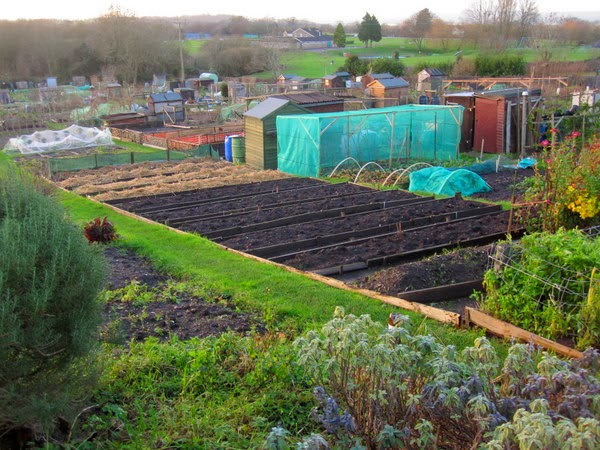 Lovely isn't it?  Neatly terraced, as the top of the site slopes quite a bit, and absolutely immaculate.  Someone's put in a lot of work and is enjoying a well earned break I think.  One of these days I am going to have to put on my wellies and do some actual work on my plot, instead of just wandering vacuously around with a camera on my way to Tesco...

Just as the sun was setting, in the top of a nearby tree there was a little bird singing his heart out.  You can just make him out.  I think it was a finch of some kind. 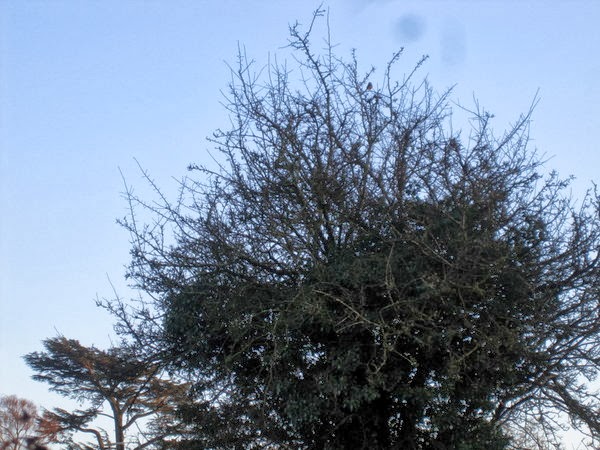 Whenever I see this scene in winter it reminds of Thomas Hardy's poem, "The Darkling Thrush".  It was first published at the end of December 1900, and was originally called "The Century's End 1900".  Some of the lines are so utterly beautiful, and as always with Thomas Hardy he perfectly captures the details of the English countryside.  I thought it might be just the thing to share today.

I leant upon a coppice gate
When Frost was spectre-grey,
And Winter's dregs made desolate
The weakening eye of day.
The tangled bine-stems scored the sky
Like strings of broken lyres,
And all mankind that haunted nigh
Had sought their household fires.

The land's sharp features seemed to be
The Century's corpse outleant,
His crypt the cloudy canopy,
The wind his death-lament.
The ancient pulse of germ and birth
Was shrunken hard and dry,
And every spirit upon earth
Seemed fervourless as I.

At once a voice arose among
The bleak twigs overhead
In a full-hearted evensong
Of joy illimited;
An aged thrush, frail, gaunt, and small,
In blast-beruffled plume,
Had chosen thus to fling his soul
Upon the growing gloom.

So little cause for carolings
Of such ecstatic sound
Was written on terrestrial things
Afar or nigh around,
That I could think there trembled through
His happy good-night air
Some blessed Hope, whereof he knew
And I was unaware.

Wishing you all much happiness and contentment in 2014.
Posted by CJ at 08:24