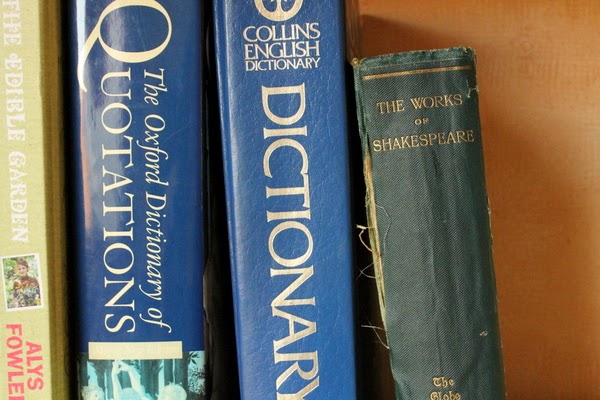 You may recall that the middle boy's teacher doesn't like him to use the words "happy" and "sad".  Now I find out that we are not allowed to use "said" either.  Apparently Said is Dead.  He actually has it writ large on the classroom wall.  And we should all be using more adverbs.  I took a breath.  The middle boy braced himself.  He could sense an opinion coming.  "Said is useful", I said, "it disappears amongst the dialogue, you don't notice it's there."
"We're not supposed to use it" he muttered desperately.
"In Proper Books it's used all the time," I said.  "Look in whatever you're reading there and you'll see."

It was a bad suggestion, he was reading one of those ghastly Beast Quest books, "Issrilla The Creeping Menace" maybe, or "Tauron The Pounding Fury".  The so-called author Adam Blade doesn't actually exist.  Beast Quest is a clever marketing idea dreamt up by the publishers.  There are over 150 books, all sold with collector's cards of course.  They are written by lots of different writers.  Who have no doubt been told that Said is Dead, as there is plenty of exclaiming, hissing and shouting nastily.

I'm all for using lots of different words, but I worry that these rules will stick, and their writing will end up being awkward.  Anyway, as everyone knows, Teacher trumps Mother every time, so I didn't waste my breath telling him not to use adverbs, just to use better verbs.  I'll just come here and have a quick rant instead.

In fact I'm on a bit of a roll now, so while I'm passing I would just like to say (or maybe even comment waspishly) that I've heard enough about devolving extra powers to every single part of everyone everywhere to last a lifetime.  Where will it end???  If we keep looking inwards and arguing and trying to get lots of little local powers we will miss the bigger picture.  The more layers of bureaucracy and the more people given odd bits power the more trouble there will be.  The more scope for badly done jobs, people sitting around doing very little of any importance and getting paid for it and the less accountability there will be.  And the more complicated it will all become.  Do people imagine that it will all be more relevant to them somehow by having the men in suits sat five miles away instead of a three hundred and five miles away.  And what of companies looking to invest here?  Uncertainty will drive them away to somewhere where the people aren't constantly bickering amongst themselves.

I don't like to see lots of expensive additions to our governing bodies.  Mayors and twin towns and quangoes for absolutely everything.  I'd like to see everything pared down and efficient.  Not a long row of snouts in troughs up and down the country.  Because at the end of the day, it is us who will have to pay for all of these extra authorities and governing bodies.  Let's turn our efforts to producing something meaningful like a smoothly-run well-organised outward-looking country.  We shouldn't even have to use the word united.

Right, I'm done.  Two paragraphs, it wasn't too much I hope, but it had to come out.  I think I watched the news too much yesterday.  I shall try to decompress today.  Hopefully the BBC will too.

I spent a good portion of the day at the Children's Hospital yesterday as it was finally time for the biggest boy to have that plaster off.  We waited an hour for someone to slice the top of the cast off and bandage the remaining half to his leg to keep it straight.  It took the nurse about two minutes.  I told the biggest boy that I could have done it myself right at the start and then none of us would have had to sit around waiting for all that time before we could move along to the next place.  He looked a bit alarmed.  I said that if they put the circular vibrating cutters and scissors (both of which are designed not to cut flesh) out the front, the mums could have whipped off the casts on the way in and we would have all saved an hour.  I could tell he really wasn't happy with the idea.  Anyway, we traipsed up and down corridors for a while and the upshot is the leg is fine, although completely stiff, so it will be a couple of weeks at least before he is back at football.

This morning should be calm and happy and spent at home.  Football training has mysteriously moved to week nights, and while that means Wednesday is an insane rush it does mean that none of us have to be anywhere on Saturday mornings.  I'm thinking homework for them and baking for me.  I hope you all have a good weekend with plenty of rest and relaxation.  I'll see you on the other side.
Posted by CJ at 07:53