I really wish I was one of those people with planned blog posts, a clear idea of what I'm going to say and complete organisation in every area of everything.  I've got lots of notebooks, so I do feel I'm on the right track.  Just need to fill them with stuff.

Today I felt like writing a blog post.  But what to say?  I dug out my cameras and had a look to see what photos there were.  First up, one of those little libraries in a 'phone box. 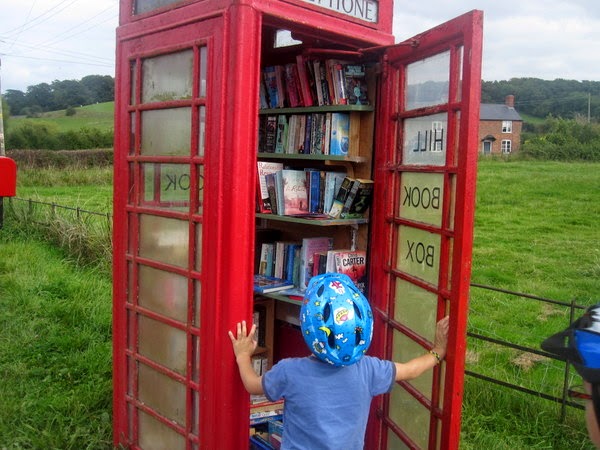 I took the two younger boys for a bike ride on Saturday afternoon.  Just about a minute down the road and you're in the countryside.  It was beautiful.  I was on the lookout for plums.  Lots of people sell produce at their gates, and I found some damson jam almost straight away.  While I dug around for my purse the middle boy tried to reach a blackberry and fell into the hedge, which was pretty much just stinging nettles and brambles.  I was on the other side of the road, so I told him to hang on until a passing car had gone and I'd rescue him (he was tangled up in his bike as well as mashed into the hedge).  When I turned to look at the car it turned out to be a police car.  The policeman was very nice and stopped to see if we needed any help.  With as much grace as we could muster we sorted ourselves out.  I did get the jam.  Also some eggs further on as well.  (On a bike, I know, madness!)

We stopped later on to pick blackberries too, there were some really superb ones.  I've always loved cycling, it's such a lovely way to see the countryside.  A great way to travel a reasonable distance, but you're still very much connected with everything.  Including a good smell of cow which followed us for quite a big part of the way. 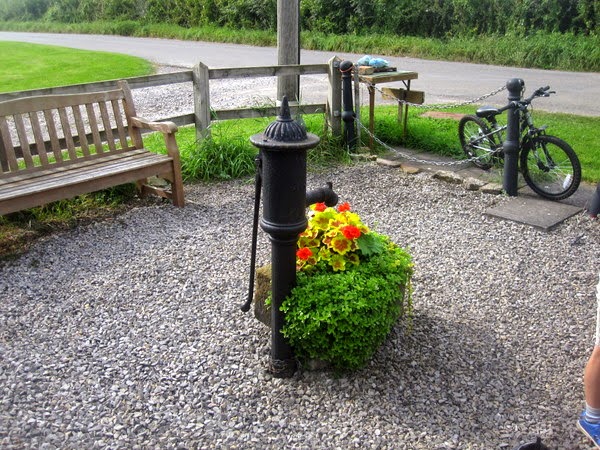 There was a little bit of salt sea air on Sunday.  Even though the biggest boy can't walk very far we like to take him out for an airing every now and again. 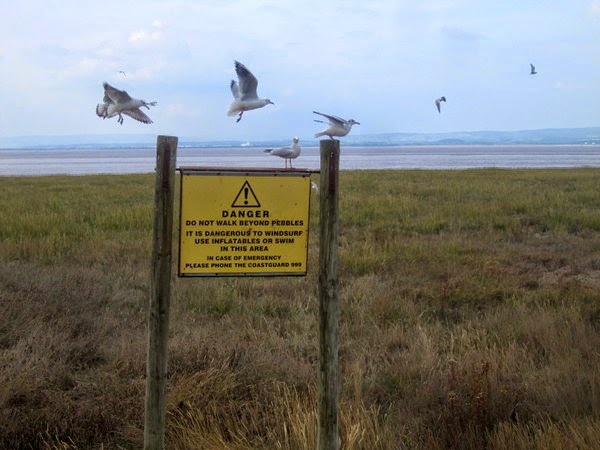 This week I've got lots on my to-do list.  Lots and lots.  In fact one week won't be nearly enough.  I started with a trip to the allotment which has been a bit neglected lately.  The middle part of it isn't too bad, but the bottom and top ends are scary.  The bottom is the bit with the shed.  Behind it is thick grass and underneath the grass there used to be rhubarb.  Who knows if it's there any more.  There are  out-of-control compost bins and nettles as well, it's all quite daunting.  A job for another day.

Today I tackled the top bit, which is out-of-control fruit.  Blackcurrants, gooseberries and raspberries, with a rogue bramble coiling round it all. 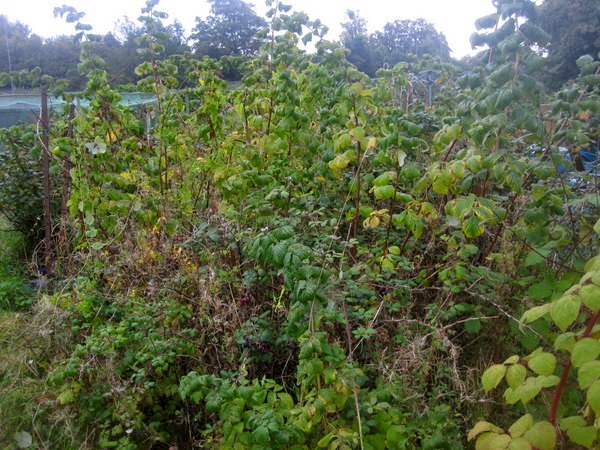 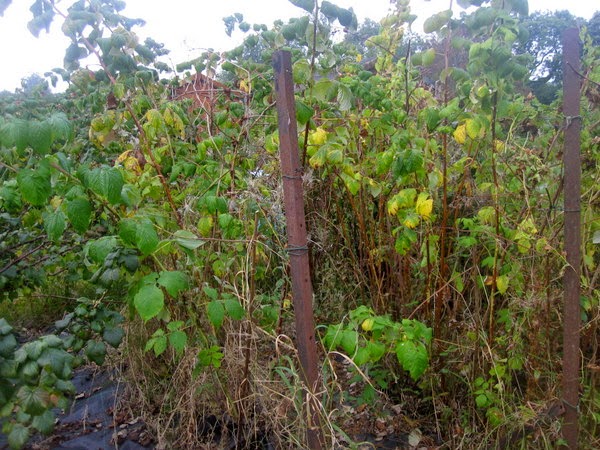 The raspberries have had a couple of years to prove themselves, but I've had almost no fruit so I think I'll take them out.  In preparation for digging out the roots I lopped off the tops, along with bits of gooseberry, blackcurrant and as much of the bramble as I could get.  My arms look like I've had a fight with ten cats.  But the plot looks a little more orderly. 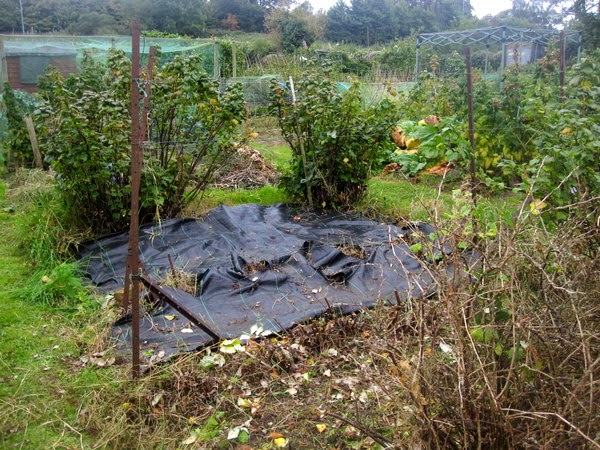 There's a huge pile of stuff in the middle of it now though.  I'm hoping it dries out enough to burn. 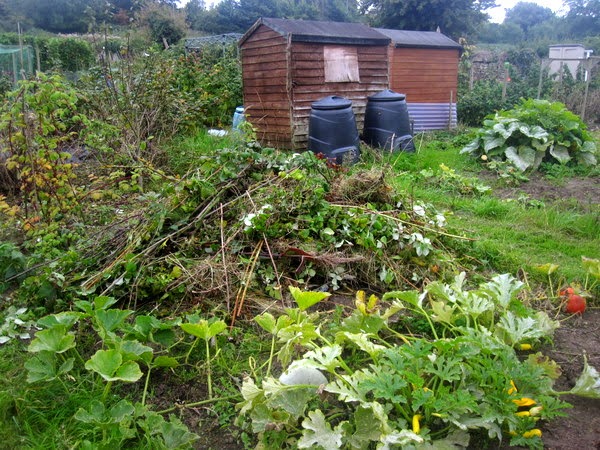 I scored a bit of a bargain while I was at the site today.  A Can-o-Worms wormery for just £2.  I've put it in the shed for now.  Come spring I'll sort it out with some worms.  Worm compost is the gold standard when it comes to compost.  So it made me particularly happy to find such a thing.  I appreciate that a bargain wormery isn't everyone's idea of delight, but what can I say, I'm quite low maintenance.

This is some of the middle bit of the plot.  The bit I'm less scared of.  I threw away a load of blighted tomatoes today while I was there.  There are a handful left along with the odd cucumber, some yellow courgettes and a few squashes. 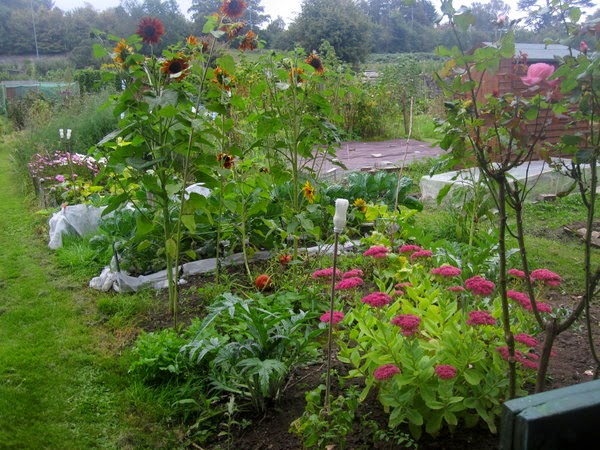 On the way out I passed this plot. 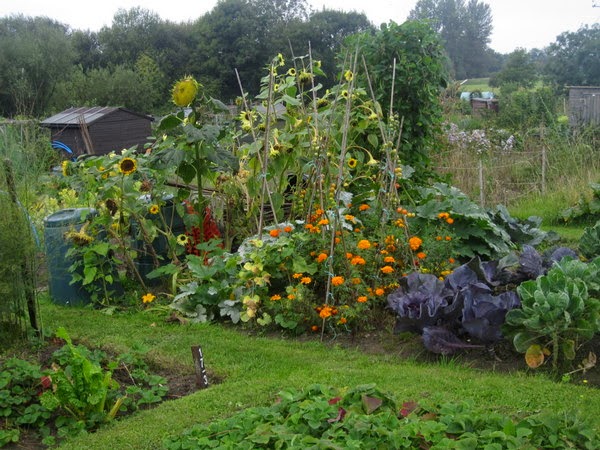 I loved the bright orange against the bluish purple of the cabbages.  I do love looking at other people's plots.  Every one unique, and so many really pretty.

In the garden there are still apples.  These are Egremont Russets.  They grew really big this year.  The skins are quite thick so I quite often peel them, but inside they are absolutely delicious. 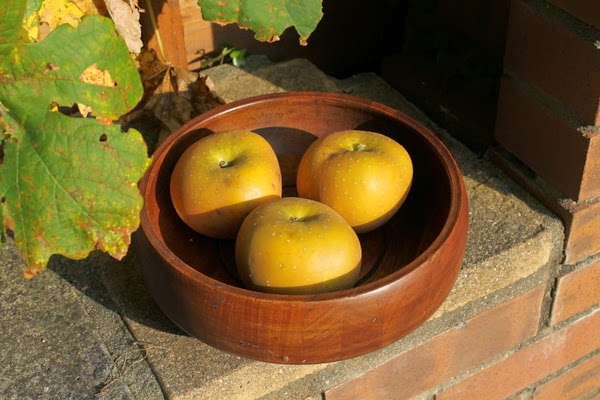 I've been looking at wool online this week.  A sure sign that the temperatures are dropping slightly.  It's how I know that autumn is on the way.  I've already got some yarn, but it's nice to browse the patterns sometimes and see what I might make to keep me snug in the winter.  Of course, at the rate that I knit it'll be winter 2016.
Posted by CJ at 22:00