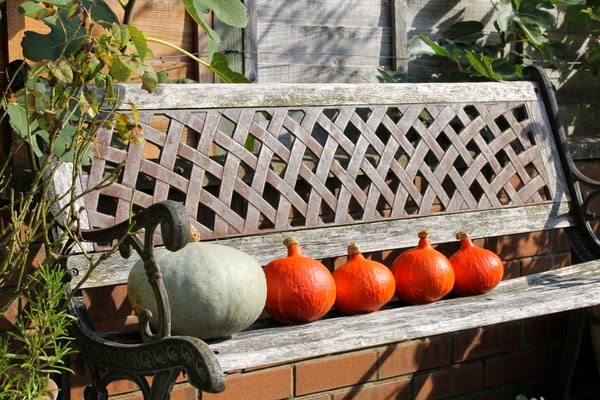 Last week still felt like summer quite a bit, despite the date.  I worked hard outside and quite a few times I was hot, even in a t-shirt.  I've brought the squashes home to store.  There aren't many, but they'll last us a while.

The boys are all about the conkers at the moment. 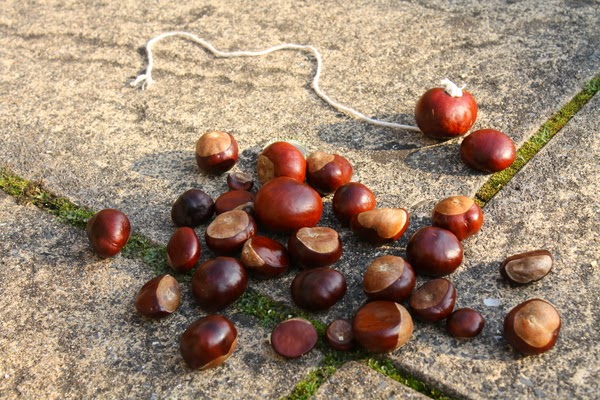 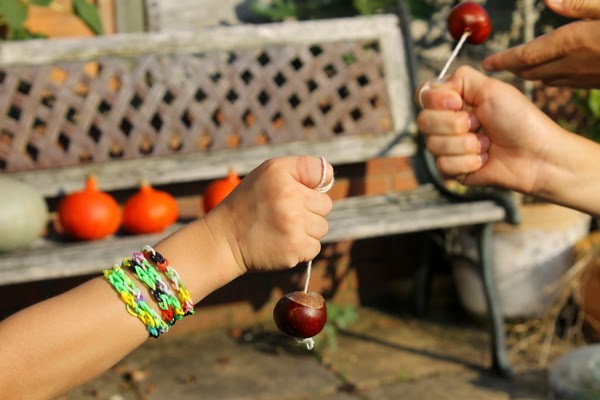 It amazes me how long the simple things entertain them for.  Of course it all turns a bit lively in the end, but the first half hour or so is delightful.  We picked these up at the park, after another bike ride along the local country roads.  It really is wonderful out there at the moment. 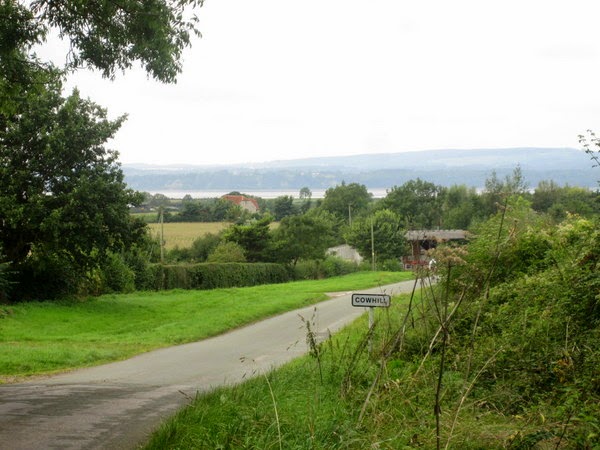 Now that there's no football training on Saturday morning I've designated it as homework time.  I'm hoping they get into the routine of this; so far it's been a struggle.  Today the littlest boy enjoyed copying out a poem though, which made me happy.  I like to just sit and handwrite things for the sake of it too.  He concentrated hard and did his very best writing.  The Owl and the Pussy Cat. 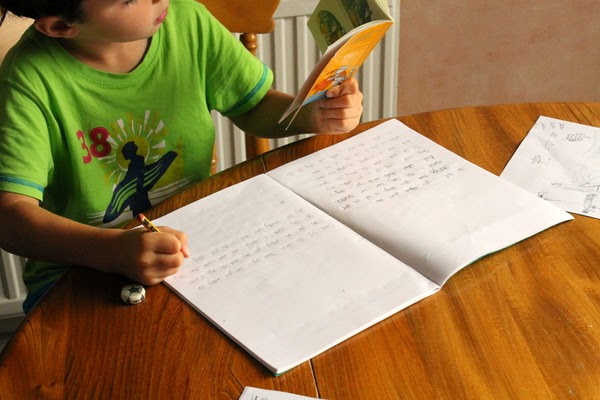 He did a bit of cooking this week as well - tortillas with huevos rancheros.  The tortillas were quite thick, but nobody minded. 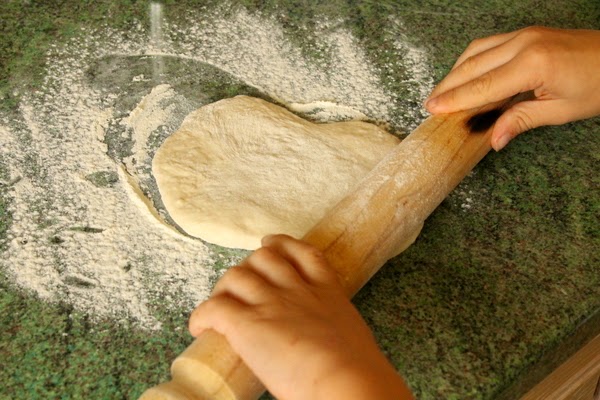 Me and the biggest boy went to the open day at the local secondary school on Thursday.  It was big and scary and tremendously exciting.  So many opportunities and so much to learn and explore.  We were shown round by two sixth formers, who were SO impressive - polite, friendly, well spoken and really enthusiastic about the school.  One of them told us that he would happily do it all again tomorrow.  No higher praise I think. 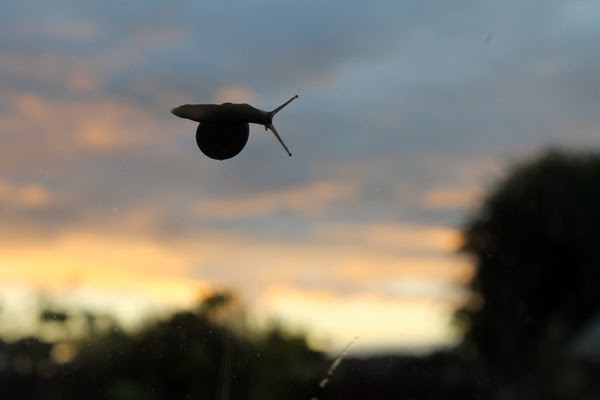 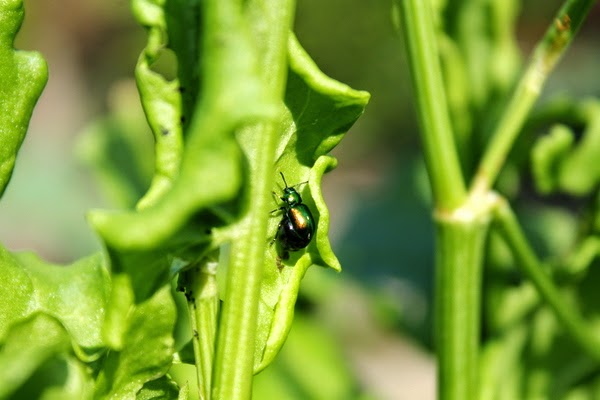 I went to the allotment every day last week.  What can I say, I'm feeling it.  and I know enough to know that I should roll with it while the enthusiasm lasts.  The weather helps, it's nice and dry there, perfect for getting stuck in.  I dug out the raspberry canes which haven't done much since I've had the plot.  I thought they were supposed to be shallow rooted, but there were one-inch thick roots going down at least two feet.  I ended up pulling them with all my might and then doing that cartoon thing where they suddenly give way and you fly backwards and end up sat down in the middle of the neighbouring plot.  They're mostly out, but I've a feeling they'll be back.

I've even got allotment reading.  Two books from the library and a book about the history of allotments from a thoughtful bloggy friend. 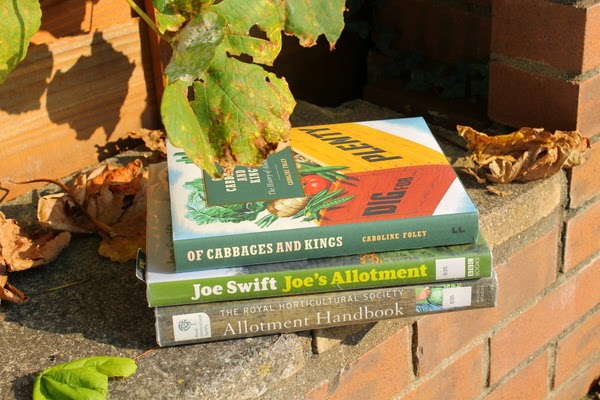 I suppose you want to hear about the jam making.  The smoke has almost cleared now, so I'm just about able to speak about it.

You will recall the grapes from the next door neighbour's vine, trailing tantalisingly all over our side of the fence.  One or two of them had just started to shrivel, so I decided that he didn't want them and so I should help myself.  The more I think about this, the more I think it is probably a cautionary tale about The Girl Who Took Someone Else's Grapes.  But they do look good don't they. 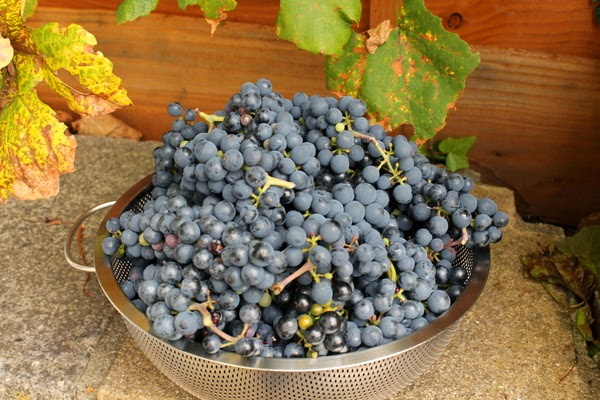 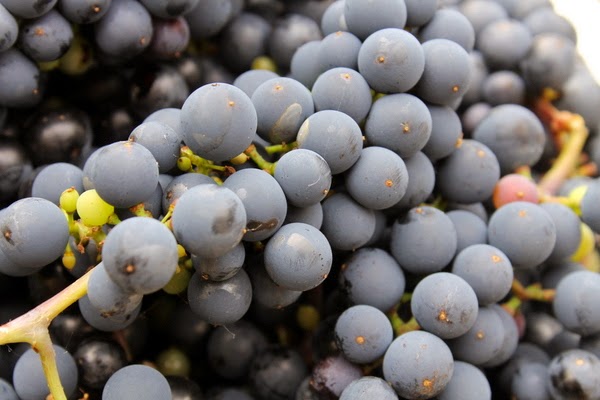 I washed them nicely, several times, to dislodge any passing wildlife.  Then I simmered them gently until they broke down and released their juice.  Next came the straining.  You may recall that the last two times I strained things it didn't go entirely to plan.  This time I was SO careful.  A huge bowl, painstaking transfer of grapes and juice to the muslin-lined colander.  Not a drop was spilt.  Not a drop.  Oh how fantastic I thought I was.

I left the juice until this evening.  The boys were getting ready for bed.  I put the jelly in the saucepan and turned on the heat.  This was my first mistake.  Doing anything at all during the getting ready for bed period is utter madness.  I warmed the sugar and added it to the hot juice and brought it slowly to the boil.  Then I turned it up to a rolling boil.  And then, and I cannot say what possessed me, I left the kitchen and went upstairs to read to the smaller boys.  Actually this is very typical of me, trying to do too many things too quickly all together.  I warned them I would only be able to read for a short while.  It was "My Side Of The Mountain".  Quite absorbing.  I got lost in the story of Sam Gribley, living wild in the Catskill Mountains.  All too soon there was a sudden strong smell of jam.  Following by a sudden strong smell of smoke.  Sigh.

A huge amount had boiled over the edge and was burning nicely on the hob.  I don't have a picture.  We really don't need to see smoke billowing out of my kitchen do we?  Plus I thought it might be pushing my luck to go and get the camera as my first course of action.  The pan was a hideous mess of burned jam.  The hob was a hideous mess of blackened charred jam.  Other Half peered through the door, sighed and opened the front door to let the smoke out.  He's used to the burnt stuff drill.  The boys were of course utterly thrilled, they love this kind of thing.  It's a bit of science for them.  What happens if you heat sugar until it pretty much explodes, and you then spread it all over something that's about five hundred degrees in heat?  Now we all know.

It's mostly cleaned up now, although I smell quite distinctly of burnt sugar.  I'm not quite sure why, I didn't get it on myself, but I do.  There are three jars of grape jelly.  It did not reach setting point, so we'll be pouring it onto things, but I didn't think I should try to attain setting point when there was a risk of everything bursting into flames.  I'm wondering if this was some kind of cosmic karma for taking the grapes.  Or if it's just me again, doing what I do best.
Posted by CJ at 21:32