I've been a whirlwind of activity at the allotment this week.  I want to do a better job of tidying up this year while the weather is so glorious.  Last year I was only partway through when it started raining and didn't stop until spring.

I started with the strawberries.  I grew them through weedproof membrane this year which cut down no end on the weeds, I can't recommend it highly enough.  But as well as the old foliage there were dozens of little plantlets rambling everywhere and trying to root through the fabric.  I cut everything off.  It seems drastic but it gets lets light and air into the centre of the plant, and it means there aren't any rotting leaves under the new growth next year.  This should cut down on the risk of fungal infections and hopefully slugs. 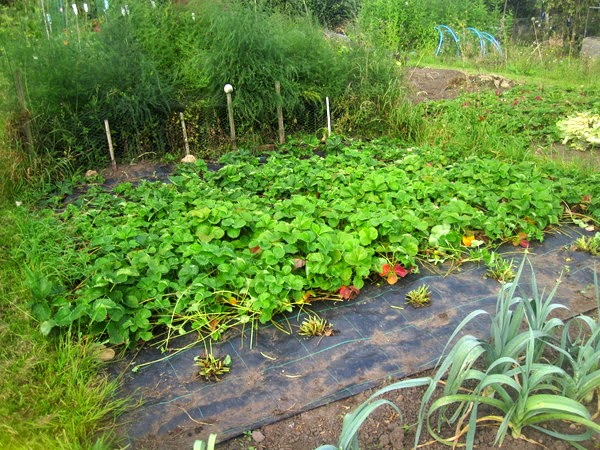 I'd potted up a few of the runners a couple of weeks before, and I took those home to plant out in one of the raised beds there.  I'm slightly concerned that the fruit at the plot will be taken by birds, slugs etc. so growing some at home is the backup plan.  And you can never have too many strawberries.

Afterwards it looked satisfyingly neat.  Almost nothing on my plot ever looks neat, so this was a very exciting moment for me. 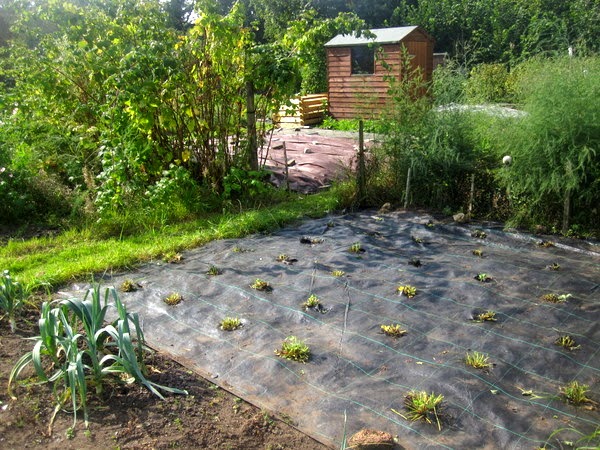 I had a big pile of sticks and other woody stuff to be burned.  I wasn't sure it would be dry enough, but as it happened it turned into a blazing inferno.  Guess it was dry enough after all.  It was a while before I dared to leave it to get my camera. 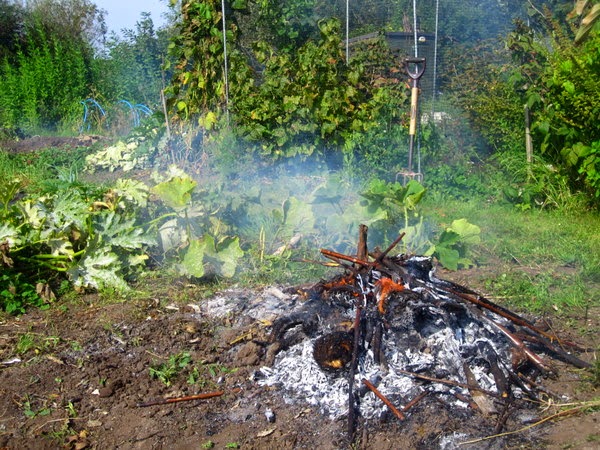 Today I started on the area of doom behind the shed.  Check out the eight foot nettle above the roof. 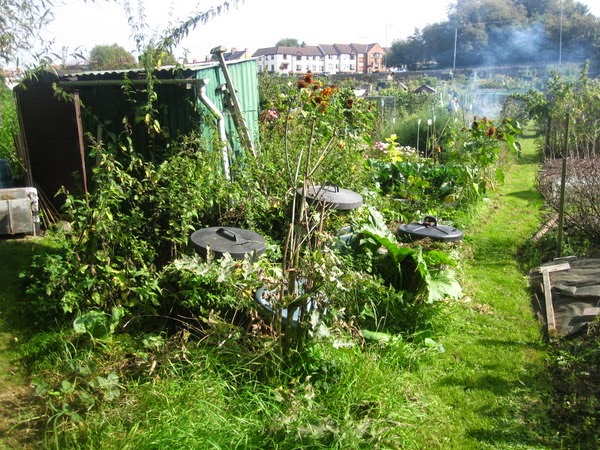 The previous plotholder used to grow rhubarb here, and he had a couple of nice neat little compost bins.  They don't seem to be nearly big enough for my needs, so I brought two old ones I had from home.  I ripped out the nettles, levelled the ground (after a fashion) and put one of them up. 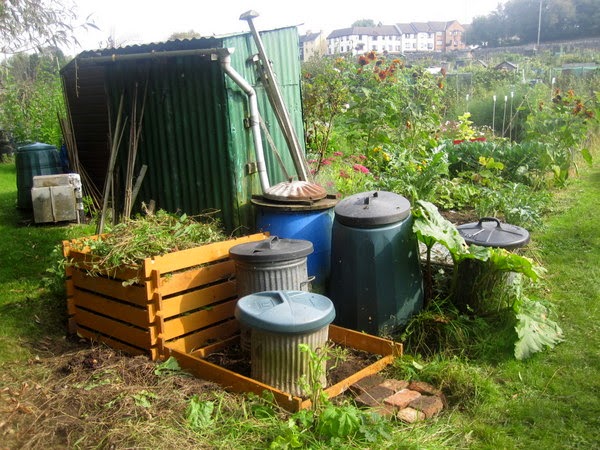 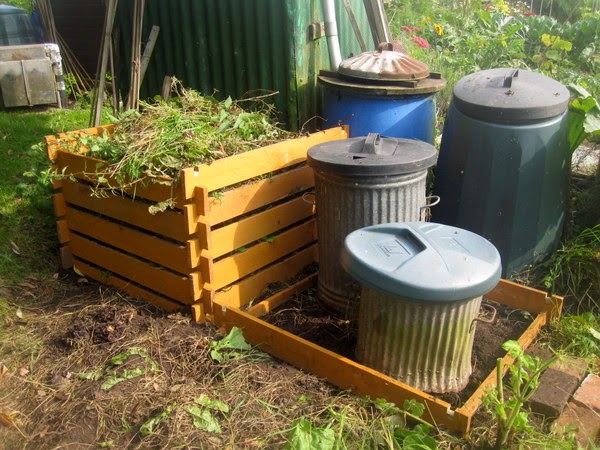 I used the top of it to mark out where the second one will go.  At the moment the second one is stuck deep in the dark dangerous recesses of the garage.  It won't be an easy retrieval.  I'm debating whether I'll do it tomorrow.  I think I need to press on while I still have a bit of forward momentum.  Wish me luck.

Around the plot there's not much to pick now.  Mostly courgettes,with the odd cucumber, some squashes, blackberries and the last of the tomatoes. 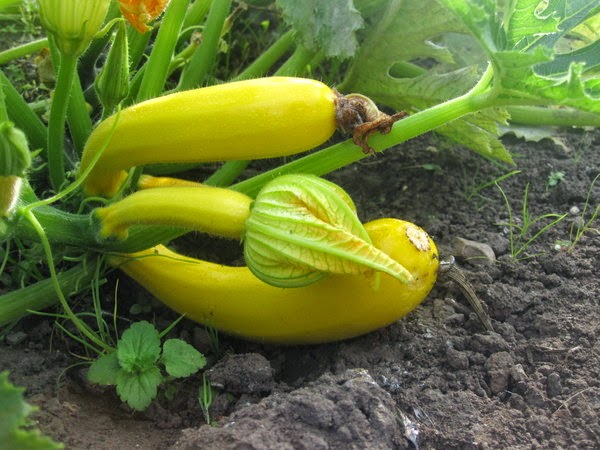 This is my favourite kind of courgette, tromboncino.  It's a climbing plant, although mine decided it would rather romp around on the ground this year.  It curves nicely with a bulbous bit on the end.  The skin is thin and delicate, and by the time a small boy has carried it up to the top of the allotment site using it alternatively as a telephone and a gun it will tend to look a bit on the battered side.  You won't find it in the supermarket for that reason.  But the flesh is dense and crisp and I find it always fruits really well. 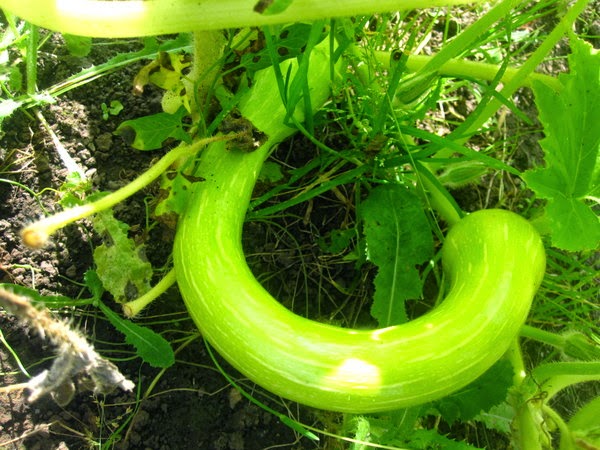 Something of great excitement to me (bear in mind I don't get out much) is the sight of tiny little sproutlets on my sprout plants.  I've never grown them before, but I found several unwanted plants in the "Free Stuff" area a while back, and remembering my motto (If It's Free It's For Me) I snaffled them.  The caterpillars are eating the main leaves, but I'm hoping enough will survive to support the sprouts. 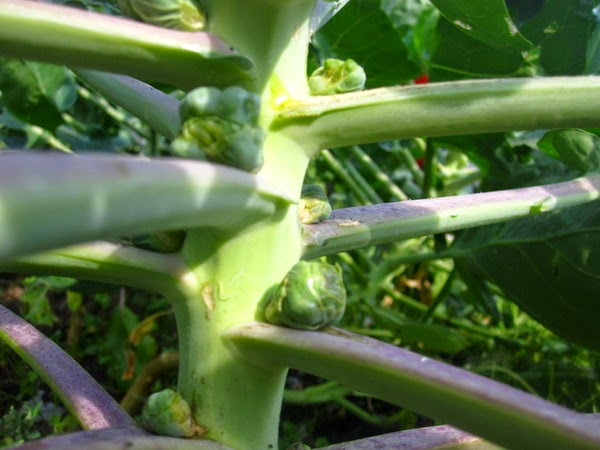 There are still a few flowers left, sunflowers and the odd rose.  The sunflowers have been lovely this year, I nearly picked a bunch today but I couldn't bring myself to cut them.  Plus I have a horror of earwigs dropping out when I least expect it. 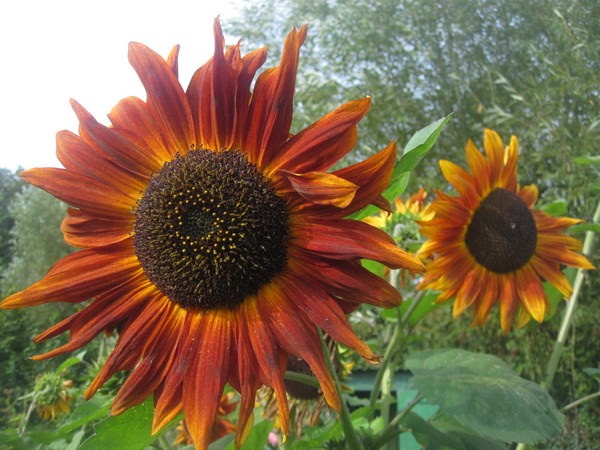 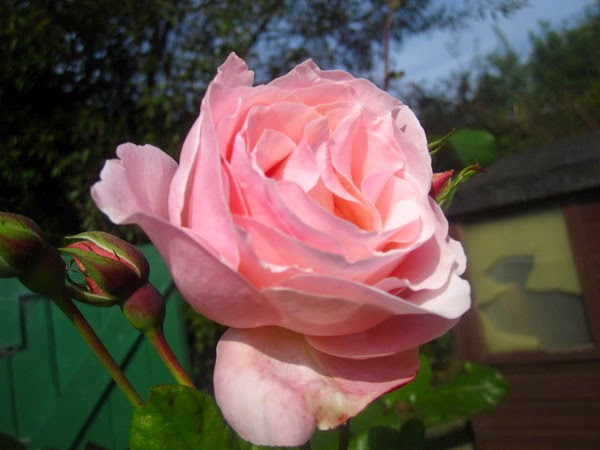 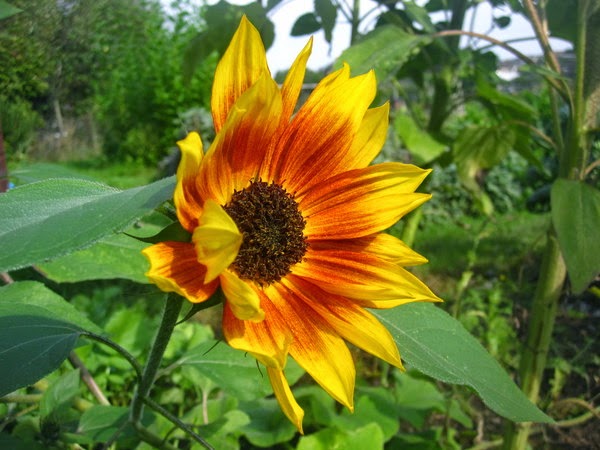 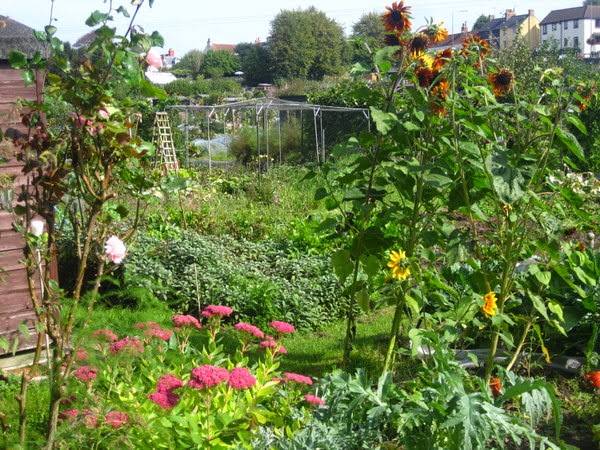 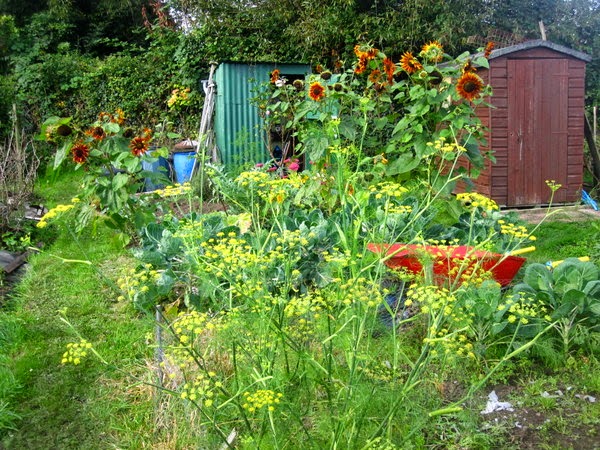 I'm hoping to happen upon a pile of free bricks to make a small area to stand things on behind the shed, as well as to make a path across the plot (where the red wheelbarrow is in the picture above).  (A number of the site's wheelbarrows were painted red for the town carnival, so that plotholders could walk in formation as the Red Barrows.)  In the meantime I shall continue the battle with the area of doom and maybe even do some weeding.  It would be nice to have things a little bit together before the end of the season.
Posted by CJ at 22:06