I've been thinking hard about what to put in the space where the raspberries were, down at the allotment.  Raspberries are nice, I love them, but there are lots of pests at the plot and I've a feeling it will be a battle to harvest any before something else eats them.  Plus there are all those suckers popping up everywhere.

So I hit upon a plan.  Apples.  The boys get through mountains of them.  They are fairly low maintenance to grow.  And I have the framework of posts and wires left over from the raspsberries so I can grow them as espaliers. 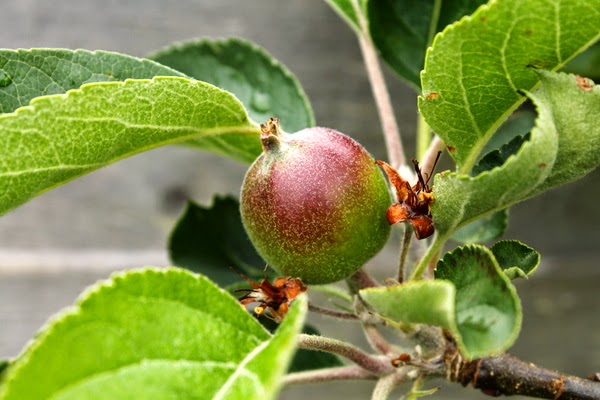 A friend is sending me a voucher for my birthday, so I've been having a look at all the different varieties there are - currently over five thousand.  Did I ever mention I'm not very good at decisions?

There are ancient varieties such as Court Pendu Plat, which was around in the sixteenth century, if not much earlier, maybe even in Roman times.  It's still available, and it's quite appealing to me to grow the same thing that people were eating five hundred years ago. 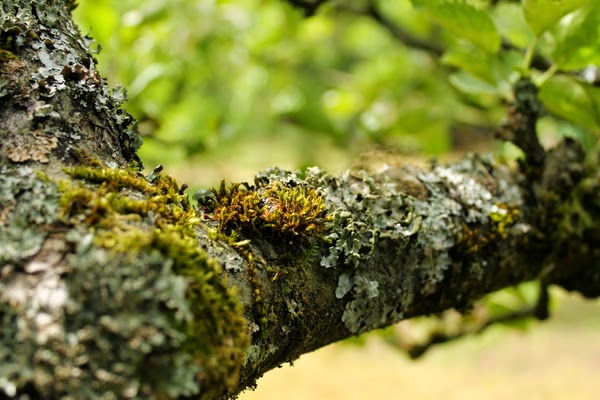 In the garden I have a Ribston Pippin, which was first recorded in 1707.  It's absolutely delicious, although the crops aren't particularly heavy and I've heard it's prone to canker. 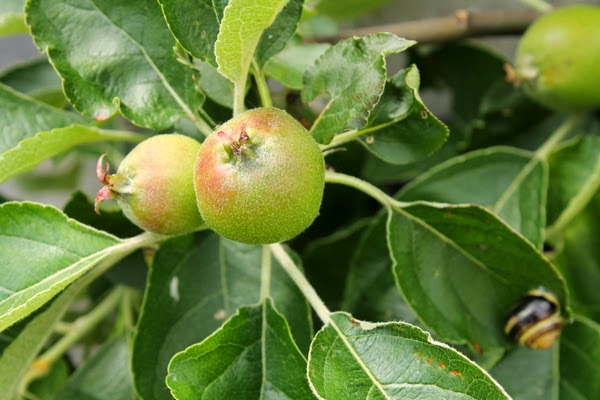 I've also got an Egremont Russet, another really delicious apple, this time from the Victorian era.  This year the fruits were vast, although again, there weren't too many of them.

At the allotment I've got a tiny Cox's Orange Pippin tree.  It's often considered to be the gold standard as far as flavour is concerned, but it's quite troublesome to grow.

The last apple I have is a young Worcester Pearmain, like the Cox, an apple from the eighteen hundreds.  The biggest boy ate all the fruit this year and said it was the best of all of them.  It has its problems as well though, being prone to disease and also being a tip bearer - it's hard to prune as the fruit only forms at the ends of the branches.  It doesn't store well either.

As well as these lovely older varieties, breeders are constantly creating new apples, and while I love the idea of apples with history, I know that there are many benefits to the new ones. 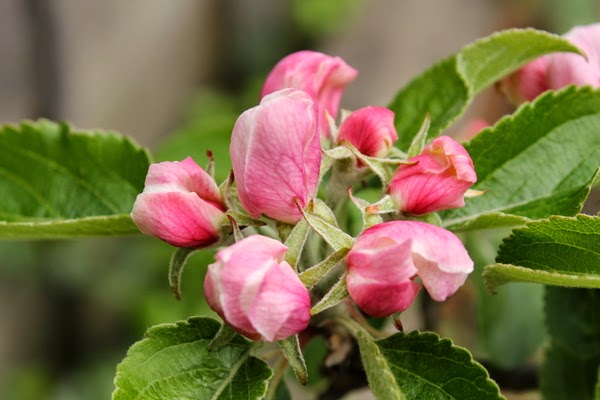 In the end I drew up a list.  In a notebook.  You know what I'm like.  A few points to consider when choosing two little trees from the five thousand available.  Or at least, from the one or two hundred that are easy to source.

A home grown apple has to taste amazing.  This was top of my list of things to consider, although it's fairly subjective unless you go to an apple day where you can actually taste lots of different types.  But nurseries include descriptions, so you can get a vague idea of what it might be like.  Textures also vary.  I prefer a crisp and juicy apple.  Some are drier and still delicious, and some have softer flesh.

We eat lots of apples.  It would be nice to have trees that regularly have good sized harvests.  Ashmead's Kernel was at the top of my list for a long time until I discovered that the crops are only light. 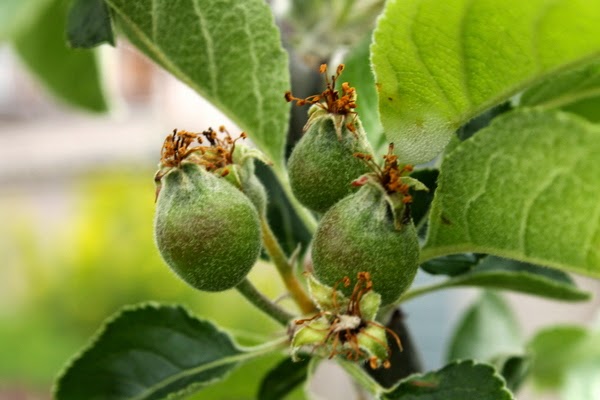 Especially important if you don't like to use chemicals, which I don't.

I don't want anything too small.  I was completely sold on a Pitmaston Pine Apple from the 1700s, until I read that the apples were sometimes no bigger than crab apples.

If the crops are heavy, then the apple needs to store for a while.  Probably not months and months, but for a few weeks at least.  And some apples such as Tydeman's Late Orange, which was also high up on my list, need to be stored for a while before they can be eaten if you want them at their best.

Apple trees blossom at different times, and to ensure your flowers are fertilised it's best to pick two trees from the same pollination group.  To make it even more complicated, some need two pollinators, so you need three trees to make an apple. 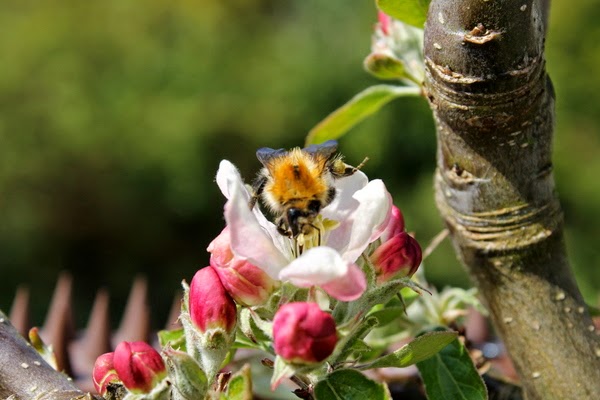 The size of the rootstock determines the size and vigour of the tree and the size of the harvest.  An espalier needs one of the larger rootstocks, MM106.  There are six rootstocks commonly used, from M27 which is for very dwarf trees, to M25 which will give a vast tree of 6-9m tall.

Apples ripen from late July until October depending on variety.  It doesn't really bother me when they are ready, but it's something to consider if you have lots of other apples ripening at a particular time.  Later apples come from later blossom, so if you live in a colder area, you might avoid frost damage to the blooms if you choose a later flowering variety. 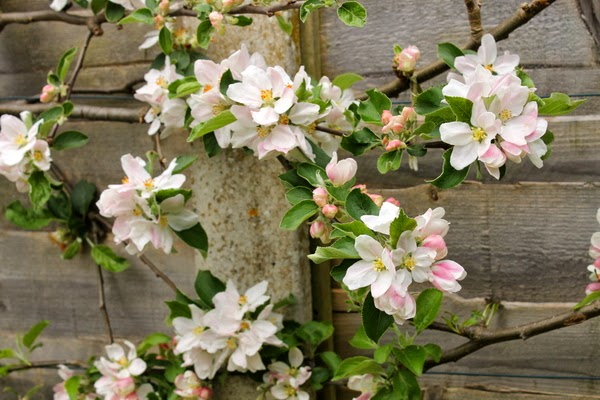 The Royal Horticultural Society gives Awards of Garden Merit to plants they consider to be outstandingly excellent.  They look at things like susceptibility to disease, so all in all it's an indicator of a pretty good variety. 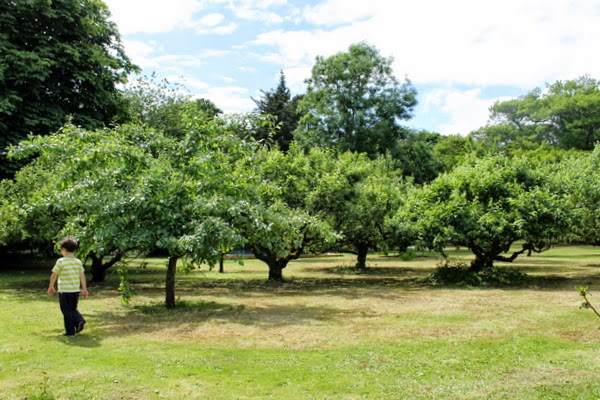 Once I had my list I looked through my gardening books and at a few online nurseries.  I quite like the way this one was set out.  I'm not being paid to say that, I just thought I'd mention it as I found it quite easy to compare the various varieties.

I was very tempted by many of the old apples, ones that have been grown for hundreds of years.  I like to imagine what it was like way back then, when apples were a precious harvest and a real treat.  But on the other hand, a modern variety, with higher yields and higher disease resistance makes sense.  Head or heart?  Heart or head?  It's usually always heart with me, and I did write down the three varieties I mentioned above, Ashmead's Kernel, Pitmaston Pine Apple and Tydeman's Late Orange.  Then I crossed them out and wrote down Sunset and Christmas Pippin.  New apples with all the advantages an apple can have.  We shall see.  If you have any suggestions, I'd love to hear them. 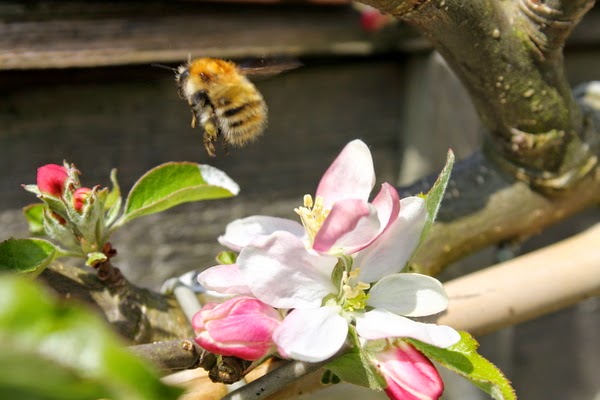 While I'm passing, and wittering on endlessly about apples, I would just like to have a word about Pink Ladies.  Pink Lady is not an apple variety, it's a commercial brand owned by Apple and Pear Australia.  UK farmers are not allowed to grow it, and yet our supermarkets are full of it.  Each and every apple shipped here from far away, each and every apple pushing the market share away from our fantastic British orchards.  The marketing behind Pink Lady is phenomenal.  It has a logo, a slogan, a club and an all singing all dancing website with a blog and a whole section aimed at children.  The apple itself, in its plastic wrapper, with its countless food miles, is available all year round.  Don't buy it.  Please.

This is Britain.  We do apples too.  And we do them pretty well. 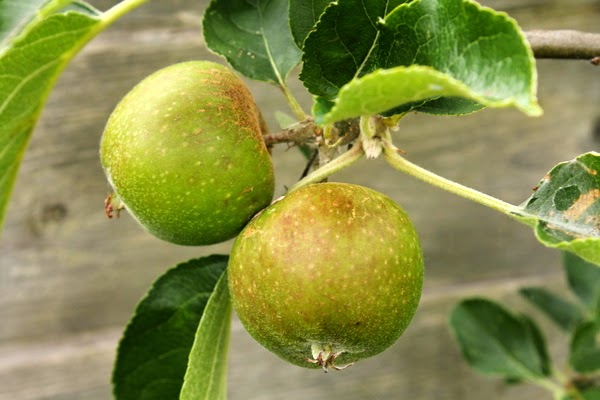