The allotment in November

I made it down to the allotment on Wednesday for the first time in probably three weeks.  I like this time of year - nothing gets too out of hand while I'm away.

It was pretty cold, and over the river there was a tube of mist.  This happens quite a lot, and I love to see it.  It's just below the horizon in the photo.  You can see the park as well, where we spend many a happy hour climbing, swinging and playing football.  And paddling in the summer in the big paddling pool. 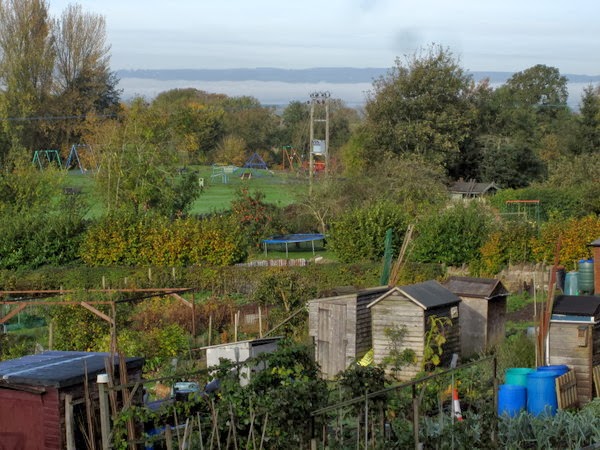 The plots are looking very autumnal now.  Still some greenness and a few flowers, but it's all slowing down and waiting to be tidied. 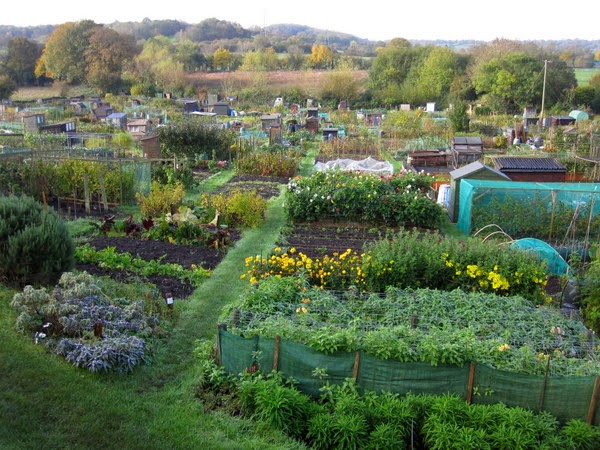 On my way to the far corner where our plot is, I saw plenty of things I'd like to try and grow next year.  Dahlias, definitely, and maybe some chard and leeks. 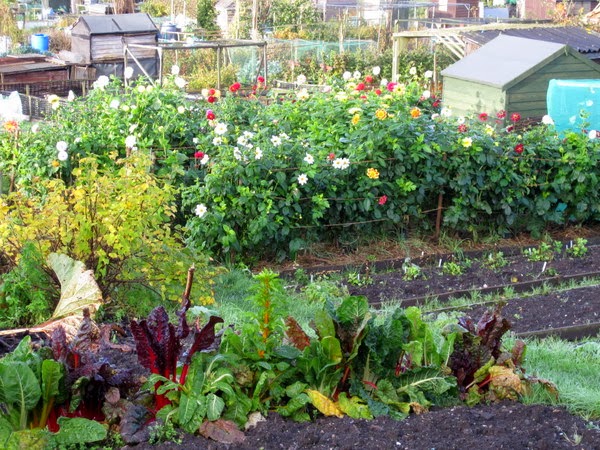 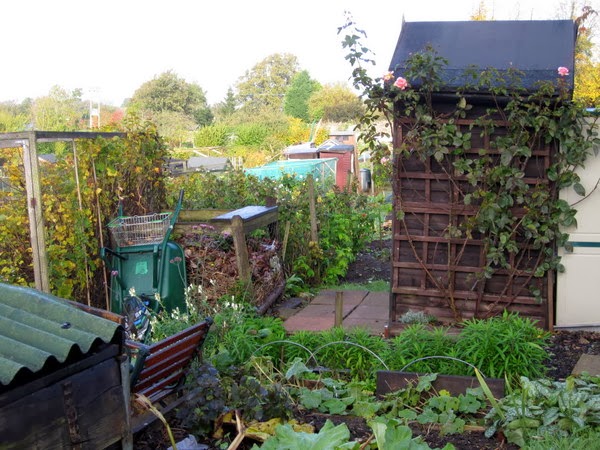 The last time I was here I planted garlic and onions.  You can just see the new shoots at the front of the picture.  I love how they germinate in these short dark months, and sit there through the winter waiting to grow away in spring. 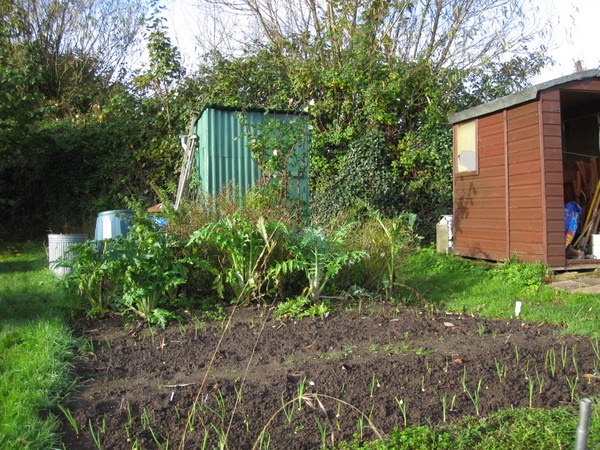 I spent some time on the asparagus bed.  Firstly cutting down all the fronds, and then weeding, and finally mulching with some leaf mold I was lucky enough to get from the boys' school last year.  It's not fully broken down in twelve months, but I'm hoping the worms will pull it down into the soil.  There were certainly plenty about.  I struggle to weed the asparagus because I don't want to damage the crowns.  It looks okay at the moment but no doubt there will plenty of weeds reappearing in spring.  I wanted to make sure I added something to the soil because asparagus needs so little doing to it it's easy to overlook. 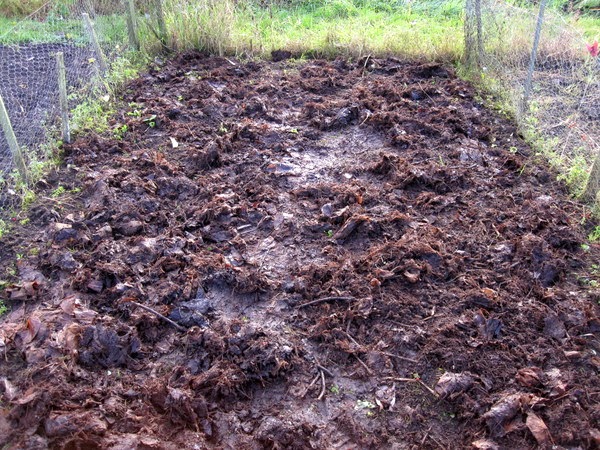 Time for a little tea break after that.  A nice cup of redbush tea.  I didn't want to wait for it to cool down, and then I got mud in the cup so I didn't drink most of it.  I don't have the luxury of time to sit about and drink tea when I manage to get a little while at the plot.  Some people, with immaculate plots, I only ever see sitting around with mugs.  It's a bit of a mystery how any work ever gets done.  There must be a little magic at work I think.  Pixies maybe. 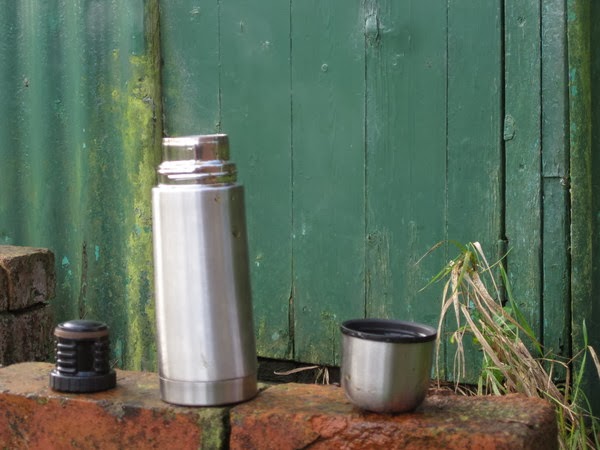 I pulled out the cosmos and trimmed the sedum and lavender, and picked the last four roses.  No more until next summer.  They were a bit battered, but they're in a glass on the mantelpiece and they still look lovely.  I don't know what variety it is, but it's been flowering since June. 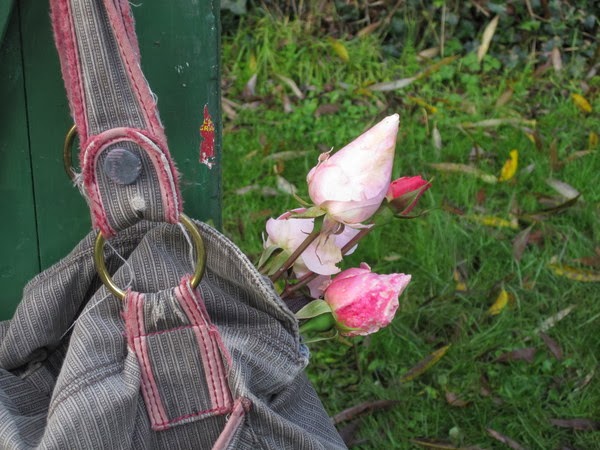 The blackcurrants are looking a bit tidier now.  At the front of the picture is the path that marks the end of my plot.  In the summer the blackcurrants had fallen completely over the path and onto the neighbouring plot.  I've cut out masses of wood, although it doesn't look like it.  This picture shows the whole plot, from the sign down to the green shed. 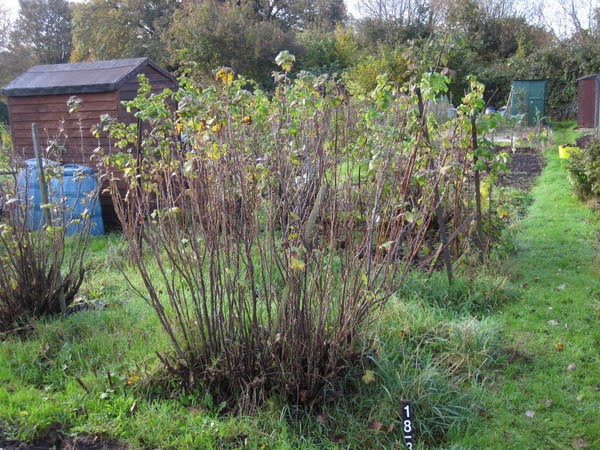 From top to bottom, there are blackcurrants, raspberries, gooseberries, a plum tree and japanese wineberry, strawberries (to be removed), a bed for vegetables etc., the asparagus, another two beds each about 3m square and then the area around the shed.  Behind the shed it's all a bit overgrown, but there was rhubarb back there earlier in the year.  Then there's a path and the hedgerow with the most enormous blackberries and beyond that the stream.  Our own little piece of land, that still gives me a thrill every time I visit.  This is the view from the other side of the fruit bit. 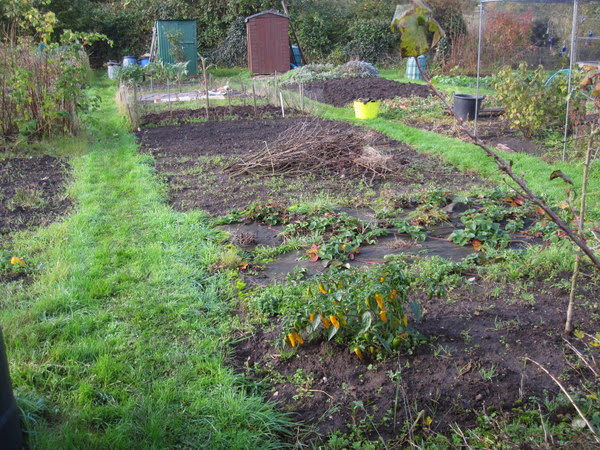 At the front is a little chilli plant I bought from Aldi back in early July.  They don't ever water their plants, and so it was really dehydrated and reduced in price.  But it recovered beautifully and has given me far more chillies than I know what to do with.  Not bad for 99p.  If I grow chillies again I'll definitely do it this way. I tried growing some in pots, but this one was far happier in the soil. 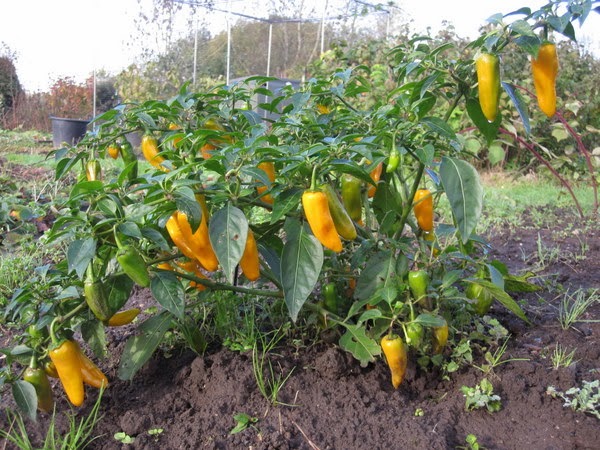 So there we have it.  November at the plot.  I don't have any more crops to harvest.  Next year I'll try and have some winter things to pick.  This year I'll just be happy to get everything tidied away.  There's still lots to do, but the pressure is off now.  So long as it's done by spring, all will be well.
Posted by CJ at 22:09