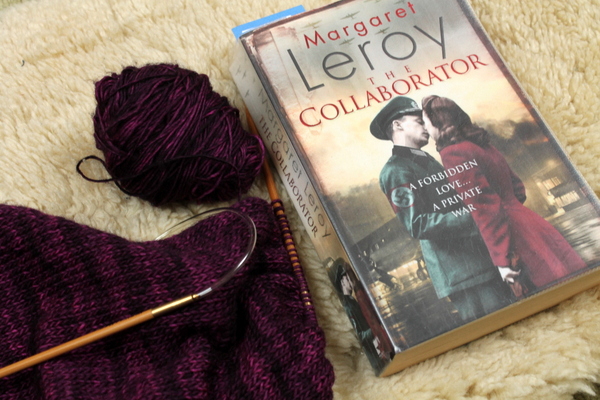 Joining in with Ginny's Yarn Along.

I wouldn't normally read a book with a cover like this, but I found a reference book in the library about who to read next if you like a particular author, and when I looked up Barbara Kingsolver this was one of the recommended authors.

It's "The Collaborator" and it's by Margaret Leroy. Set in Guernsey during the German occupation of the Second World War, it tells the story of one woman's war years. I really enjoyed it, from the details of day to day life under occupation, the darker story of the prisoners kept on the island and also the personal relationships. People dug up their flowers to plant vegetable gardens. It made me think how hard it must be to grow things and know that if they fail you will go hungry. There was a great food shortage there during the war.

I was a bit embarrassed by the cover. Romance! Eek. I have something with lots of plain blue now. Much more comfortable with that. Wouldn't want people to think I'm some sort of soft nice person.

The knitting is a(nother) scarf. I like to knit things that will fit, and a scarf fits the bill nicely. Partway through I realised I'd need another skein. When it arrived it was a completely different colour. I'm not complaining, I like that the skeins are all individual. I'm knitting the middle section with two rows old colour followed by two rows new colour to blend it in a bit, and I'm pretending it's an intentional design feature. No doubt by the time I've finished it it will be spring at least.
Posted by CJ at 05:30