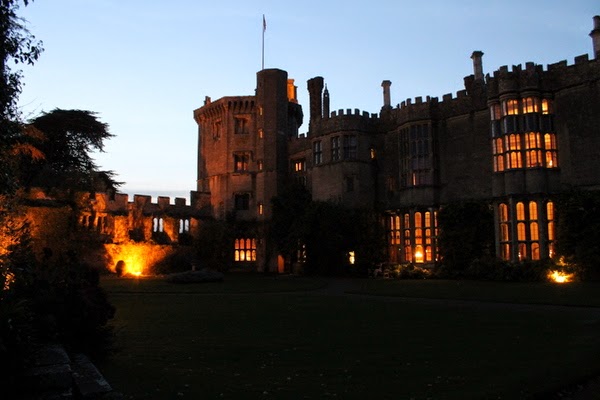 I've mentioned the castle in our town before.  It's a Tudor castle, now a luxury hotel, but every year the doors are very kindly thrown open to everyone for a fantastic Hallowe'en party.  We went along.

First you pass the church and the graveyard. 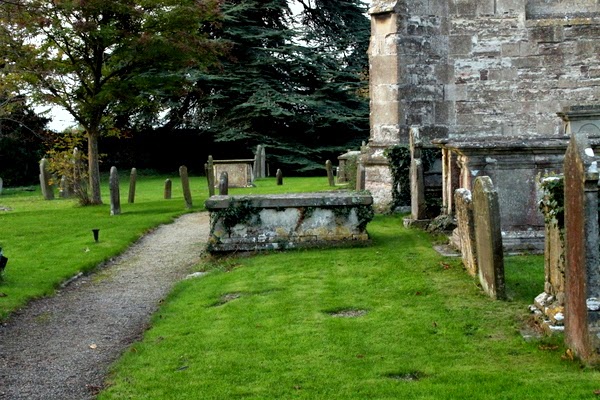 The past the gatehouse. 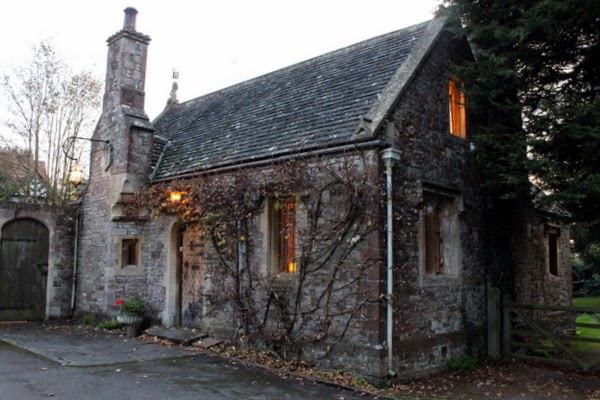 This is the driveway, lined tonight with candlelit pumpkins.  On the left beyond the lamp post are grape vines. 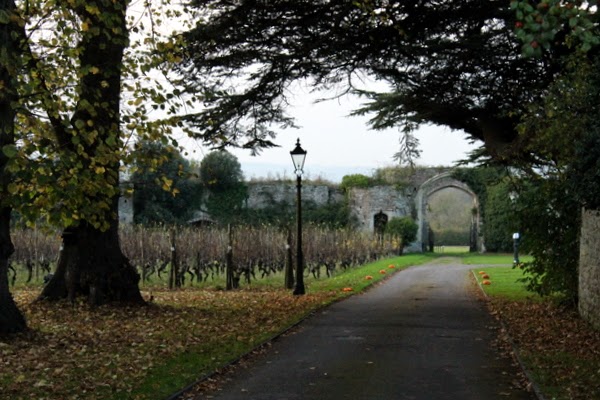 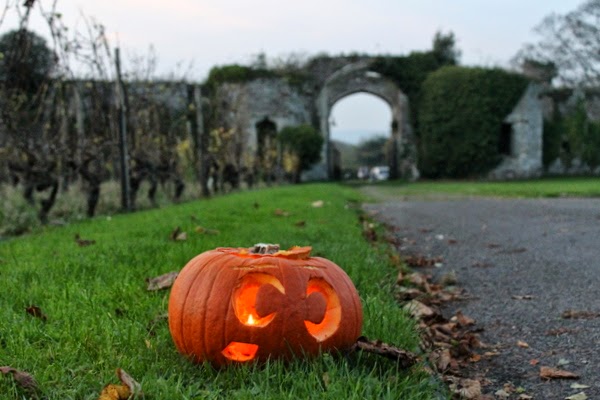 Then round the corner to the castle. 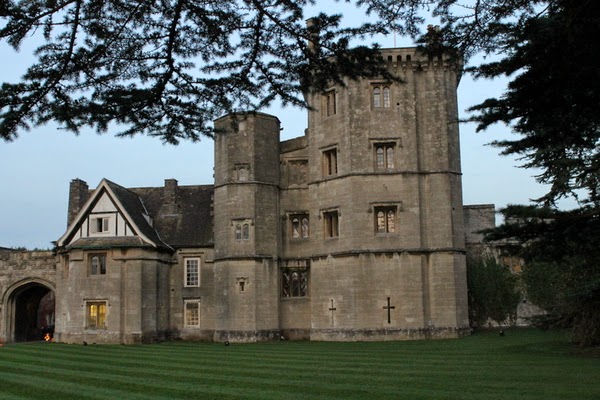 The building began in 1511 for Edward Stafford, the 3rd Duke of Buckingham.  He was reputedly trying to impress his king, Henry VIII, so that he would pay a visit.  Unfortunately for the Duke, in 1521 Henry beheaded him for treason and confiscated the castle.

In 1535 Henry and his new queen Anne Boleyn spent ten days here as part of a honeymoon tour.  All of this of course makes it an excellent place for a Hallowe'en visit.  There are also stories of a child ghost who has been seen on occasion, and on a dark night it's all incredibly atmospheric. 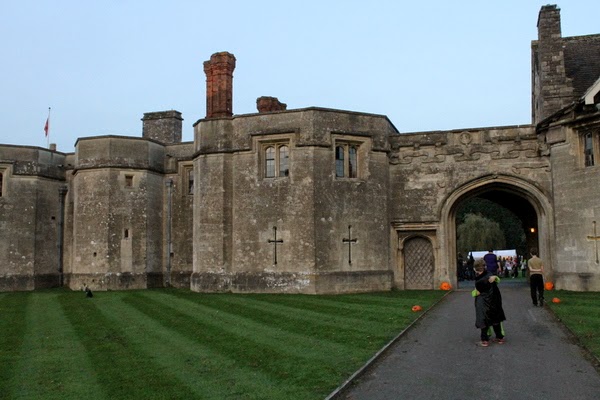 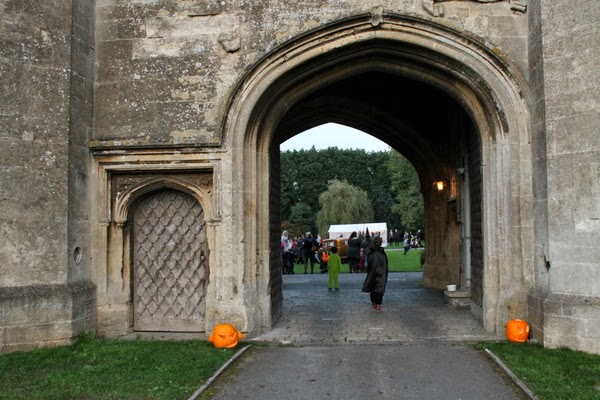 The rooms are magnificent, all enormous fireplaces, huge tapestries and suits of armour.  There are spears and axes hung on the walls and portraits of long dead dukes. 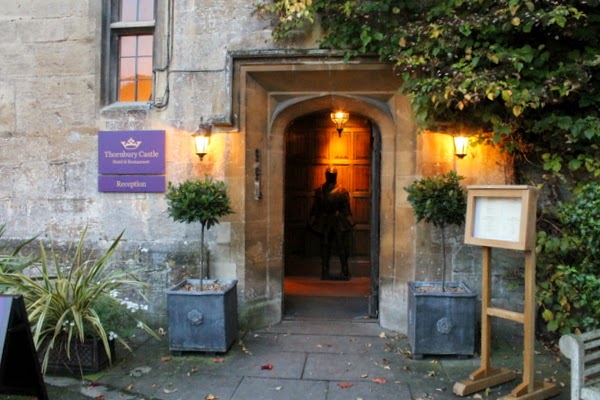 In the middle there was a vintage car which was mysteriously enveloped in smoke, and a beast was being roasted.  There was apple bobbing and toffee apples, a quiz trail and a carved pumpkin competition and a cauldron full of dry ice that the boys had huge fun with.  I narrowly avoided stabbing myself in the throat with a toffee apple stick and the littlest boy tried leapfrogging something in the dark and failed spectacularly.  We heard the slap of small boy on stone as he hit the deck.  His little costume was a bit grubby, but I picked him up and dusted him down and he managed to soldier on.  Sometimes he reminds me so much of me.

Through the gateway in the wall is this view and the walled gardens. 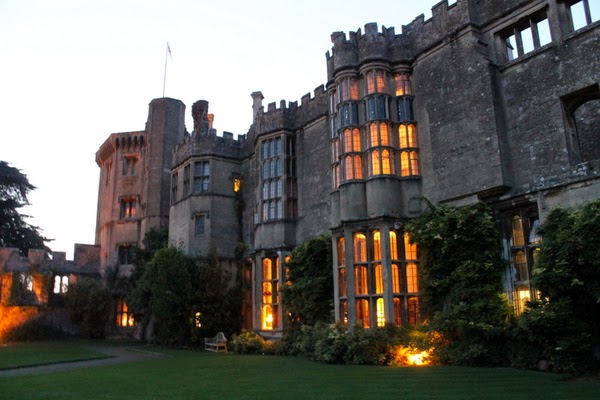 The gardens are wonderful.  The sun had set by the time we arrived, so it was too gloomy to photograph well.  There are beautiful yew topiary walls with arrowslit shapes cut into the tops.  The children were welcome to play hide and seek and in the darkness there was plenty of squealing and jumping out at people. 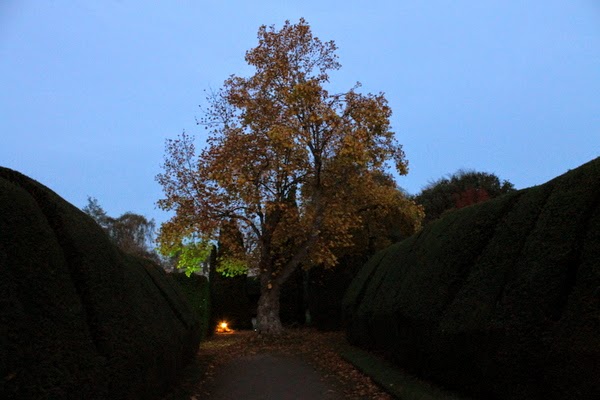 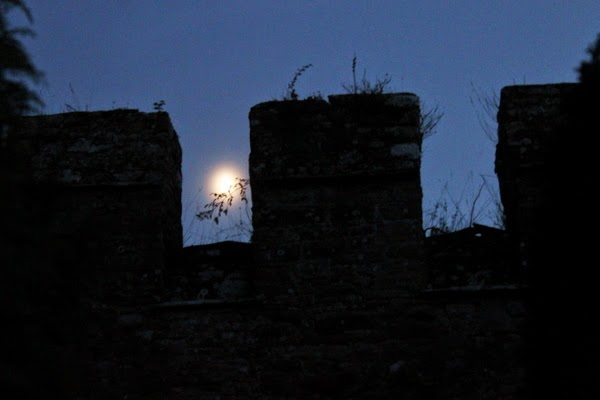 It's an exquisite place, very popular for weddings because it's so photogenic, if a place can be referred to that way.  One day I shall try and take some pictures there in the light, although to be honest I don't naturally blend in at luxury hotels other than under cover of darkness.
Posted by CJ at 20:54