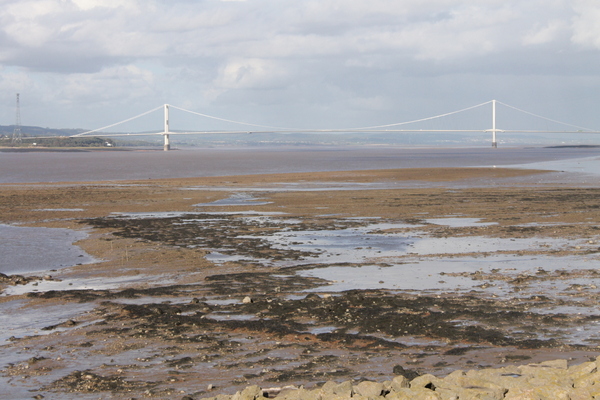 I took the boys down to the banks of the river recently for a gallop along in the fresh air. The tides have been particularly high lately, and this was the corresponding low tide. Miles and miles of uncovered mud and sandbanks.

In the distance you can see the Severn Bridge. It's just celebrated its fiftieth birthday. I watched a programme about it the other day, and it really was amazing to see how it was built. It's a suspension bridge and still considered one of the finest bridges of its type in the world. It has Grade I listed status.

The Queen opened it in September 1966, just a few weeks after England won the world cup. She then went on to Filton in Bristol to look at Concorde which was being built there. Everyone was on a bit of a high. The bridge replaced the Aust ferry and allows people to get from South Gloucestershire to Wales without making a big loop up through Gloucester and back down the other side of the river.

The foundations of the bridge were laid each day in the brief couple of hours when the tide was low enough to work on the river bed. Then the men would have to pack up and wait for the next low tide 10 hours later. I've mentioned the tides here before. The Severn has the second highest rise and fall in the world, as much as 15m (49ft). When the tides are exceptionally high there is a bore, a wave which runs upstream. There has been one recently, and quite often surfers come to ride it. There's only one wave per tide, so if you fall off you have to wait 12 hours for the next one.

The bridge has a footpath, so if you choose to you can walk across. To be honest I'm not a fan of walking over scary things, especially with children in tow, so I've never done it. You're obviously quite close to the traffic as well, so it's not the most peaceful of strolls. Maybe one day.

The bridge is a thing of beauty from the distance. A delicate looking structure, belying its strength. It's the gateway to Wales, a place you know I love, and for the pleasure of crossing it you're required to pay £6.60 (about 8 of your US dollars). Worth every penny I think. Coming home is free.

Further downstream is the newer bridge, often called the Second Severn Crossing. A bit of a brute by comparison. 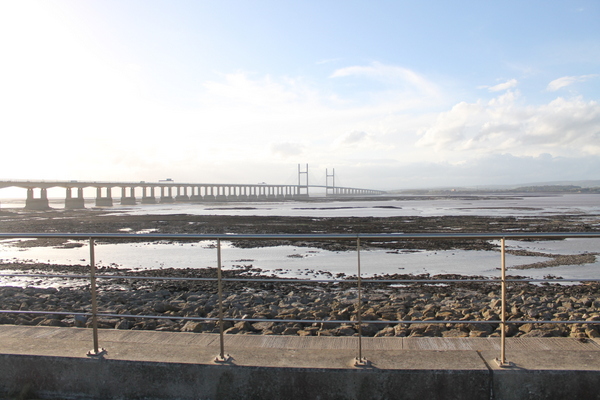 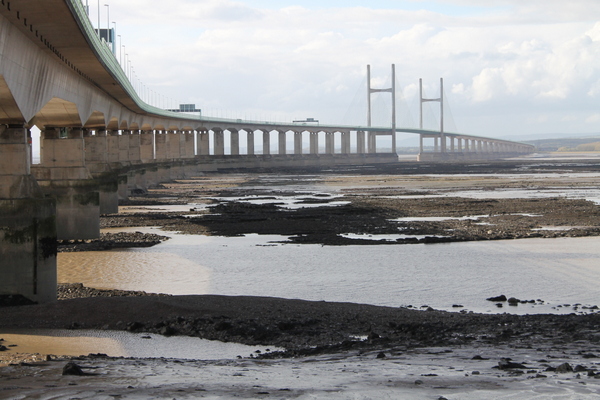 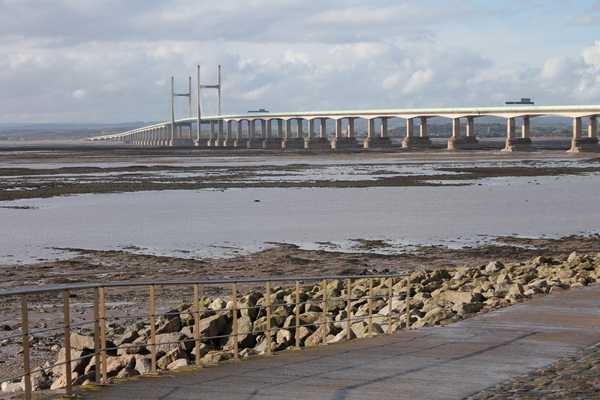 You can see what I mean about the low tide. The river is out there somewhere. The mud flats are fantastic for wading birds, and are important overwintering grounds for many species. There are a lot of fish as well, including migrating eels and salmon. All in all it's a pretty fantastic place, although at a glance it might seem a little godforsaken.

There have been murmurings about harnessing the tidal power of the Severn. I'm not in favour. Despite the need for green energy sources this area is too valuable for wildlife for man to mess around with any more. We've meddled quite enough already, it's time to leave well alone.
Posted by CJ at 13:43