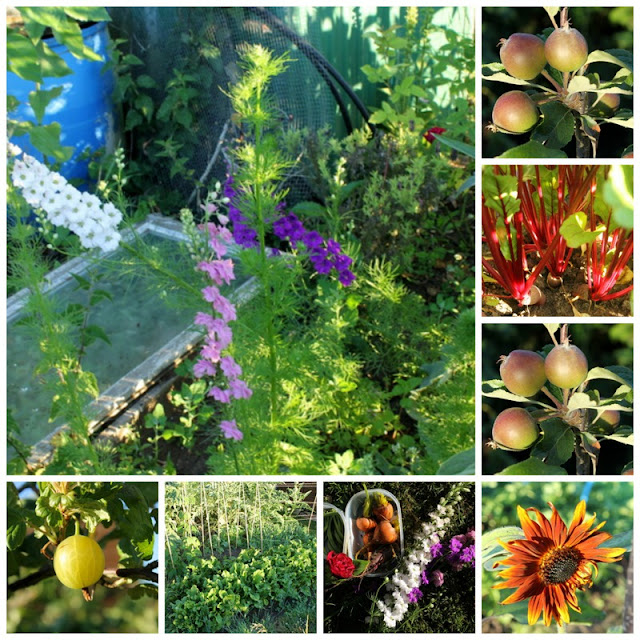 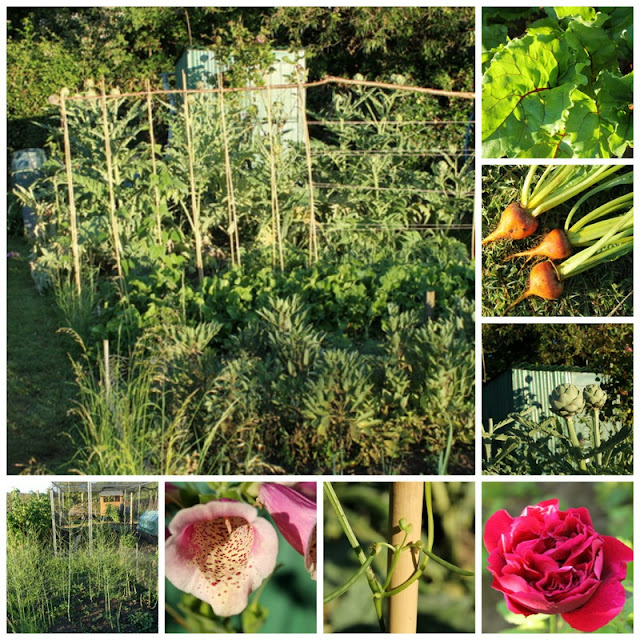 Photos from the plot this morning (apologies for putting the apple picture in twice, I only just noticed and I know it will all go wrong if I try to change it).  I got there at about 5.50am, and yes, I think I was the first there.  I'm an early riser, so occasionally I go straight to the allotment for a little tidying and watering.  In the summer it means I can avoid puffing up and down with my watering can in the hottest part of the day.  Plus I've got a lot more energy and enthusiasm in the mornings.  By the afternoon it's almost all gone.  I revive slightly after the children go to bed for some reason.

June is the month that the harvests really kick in.  I picked the first of the beetroot and French climbing beans.  I've also been picking gooseberries, artichokes and broad beans, turnips and radishes, and a few pretty flowers, larkspur and roses.  I stopped picking the asparagus around midsummer's day and already it's thickening up into a little forest.

A few other crops are finishing as well.  Turnips and radishes have turned woody and the broad beans have finished, so I did some pulling out of things.  It means there's a little space for more although I'm not sure what yet.  The weeds are coming along brilliantly as always, but hoeing them in this hot weather is fairly effective.

I roasted the beetroot for tea.  The biggest boy accidentally left a bit on his plate.  I take great exception to people leaving things that I've grown (and sweated over) myself and by now everyone knows it is a dangerous thing to do.  Apart from anything else, as I told him, it was a little bit of heaven on a fork.  Eyes were rolled.

Over pudding, there was a conversation about today's visit to the school by a police horse that went something like this.

Biggest boy (to littlest boy):  You were really disrespectful to that policeman, you weren't behaving like it was a proper school thing.  You shouldn't have been messing about and talking and poking me in the back and going "Riot, riot, I predict a riot."   I did try to tell him off, but honestly, I nearly choked I was laughing so much.  Where does he get it from???
Posted by CJ at 21:49