Down at the allotment the plot next to mine continues to romp away unchecked.  It's a mystery why someone would wait years for an allotment and then when they finally get one not bother to touch it.  Before I got my plot I was a bit obsessive, ringing regularly to check where I was on the list, checking the society minutes for clues as to when plots might become available, joining a group campaigning for more allotments in the area and generally staying on top of the situation.  When I finally got a plot, I was straight down there, ripping out weeds like a maniac.  The new plotholder - not so much.  It's been three weekends now, and not so much as a gooseberry has been picked.

I was down there last night, and it's so overgrown now I thought I saw a troll in there.  It can be quite spooky there in the evenings, what with pigeons flapping and the possibility of muntjac jumping out of the undergrowth and attacking me.  (They do do this, I've read about it). 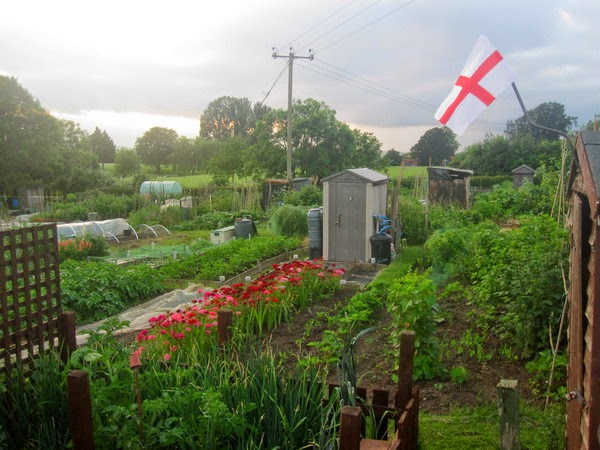 Elsewhere the flag is flying.  In fact it's there all the time, not just at moments of extreme patriotic emotion.  We've been watching a fair bit of football.  Not something I ever did before I had three boys, but somehow I've been sucked in.  I'm even allowed to play sometimes, although I'm so rubbish, never having kicked a ball until a few years ago, that I'm a player of last resort.  I'm quite a heffalump as well, so I'm always a bit worried about squashing smaller players.  I do feel that this inhibits my performance a little and prevents me hitting my true potential.

I learned something about highlighter pens today.  Although they look fairly wishy-washy, they are actually more permanent than you might imagine.  The littlest boy has been colouring himself in after bedtime.  It's so light he doesn't get off to sleep for ages, so he looks for interesting things to do.  Last night he coloured his leg and foot and gave himself toenail varnish in fluorescent yellow.  I think he was hoping that he'd glow in the dark.  Then he had a little scribble on his sheets and wrote his name.  I put them through the wash but it didn't shift at all.  If he ever needs to take a named bedsheet anywhere he's all set.

I'm feeling a bit of positive energy sweeping over me at the moment, which is good.  Sometimes I get quite dramatic and quick mood swings, so I know to make the most of the positivity while it's here.  I'm trying to declutter a bit and get more organised, to do better at things, to fit more into the day and to generally get a grip on life.  Some people make it all look so easy.  I find I have to try hard to keep it all rolling along sometimes.  But right now the house is tidy-ish, the boys are clean and fed and sleeping, the garden and allotment are (to use the OFSTED scale) Satisfactory, and the guinea pig has clean bedding, fresh straw and a good carrot.  It's almost like I have it together.
Posted by CJ at 22:17