Have I ever called a post "Breathe" before?  It seems I might, it's something I frequently mutter to myself, in a slightly strangled tone.  The week has flown past in a slightly highly stressed flash.

It started on Sunday...  I was awake early, so I thought I'd head down to the allotment and have a tidy round and do some watering.  The littlest boy woke up too, so we went together.

Our little town was looking pretty in the morning sunshine.  The bunting is often up, for one thing or another.  To be honest I'm not quite sure why it's there at the moment, but I love it. 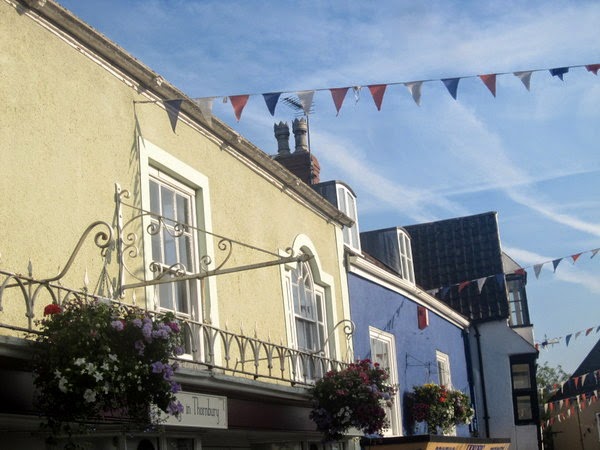 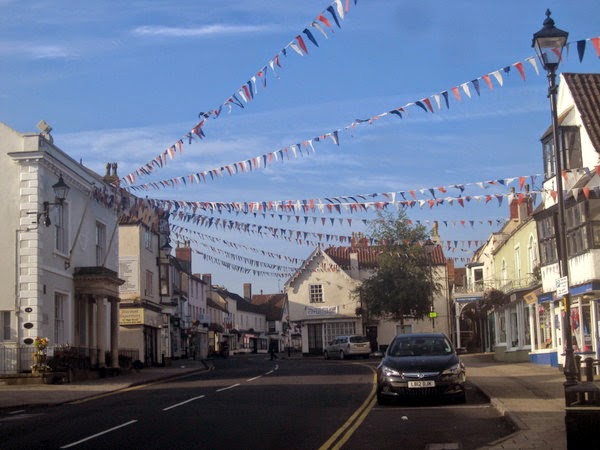 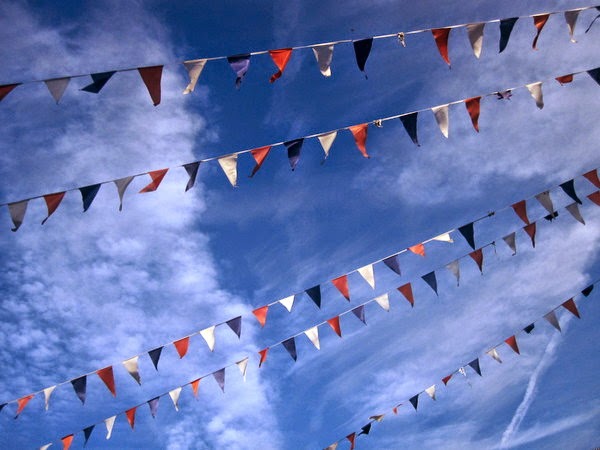 We parked on the high street and walked along to the allotments. 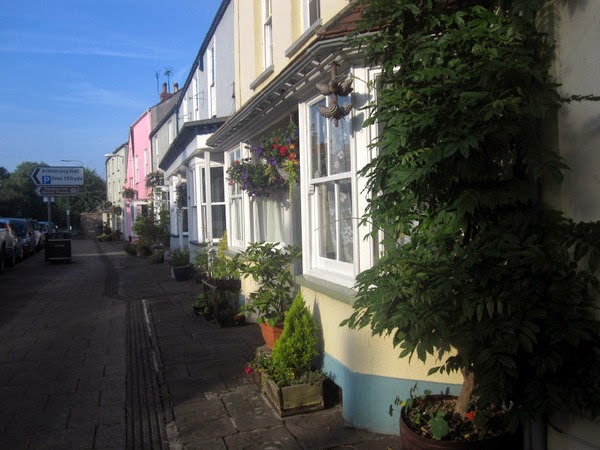 By seven we were there, enjoying the quiet stillness of the early morning.  We stayed longer than we intended, but at quarter to ten we were ready to go home for breakfast.  The car was serviced just a few days before, and a large chunk of money spent on various bits and bobs.  Imagine my surprise then when it didn't start.   I ended up calling the roadside assistance people and buying a new battery from them.  Sigh.  It was getting on for eleven o'clock before we got our breakfast.

Moving swiftly on to Monday.  A lump on the guinea pig's neck turned out to be an abscess.  She seemed perfectly happy in herself, although the vet thinks it might not heal.  It's been drained, and she's on a three week course of antibiotics.  We're going away tomorrow, so that means that someone else will need to wrap her up in a towel once a day and squirt medicine down her throat.  In a deft manoeuvre I caught a lovely neighbour on her way into her house and she very kindly volunteered.  Thank goodness for wonderful neighbours.  (The word "volunteer" is used loosely in this context).

In the kitchen you can see the little medicine bottle and syringe.  There's also the last of a bottle of suncream, close at hand for early morning applications, fruit being used up before holiday, a party invitation to be replied to, a couple of allotment roses and a box of plaque disclosing tablets.  I made the children each chew one up and it's as I suspected, their teeth cleaning is diabolical.  They have all been duly lectured and sent off to do it properly. 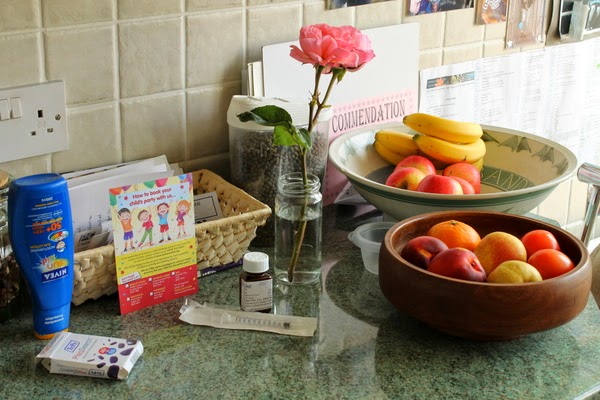 On Wednesday it was sports day.  An afternoon of watching the little people sprinting for the finishing line.  The biggest two won their races, the littlest boy is a smaller chap altogether and not quite as fast as one or two of his classmates.   But fun was had all round.  I think after a few seasons of watching football all winter I'm a bit more shouty than I used to be...  On my way out of school late in the afternoon the littlest boy's teacher told me that I could go on the school trip the next morning.  I volunteered a while ago, but when I didn't hear anything I assumed there was no space. 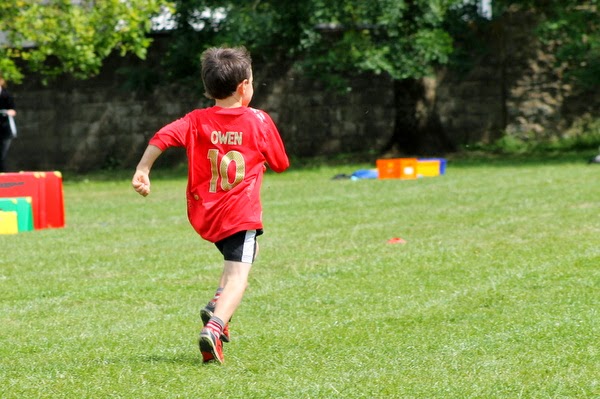 So instead of packing, I spent Thursday at the beach with the littlest boy and his classmates.  We were ready in plenty of time, and just as I was leaving the house to walk to school at 8.30am I turned on my phone.  Imagine my surprise when I saw a text, sent at 6.10pm the previous day "reminding" us that the coach was leaving at 8.30am prompt.  We shot off to school like ferrets up a drainpipe, although as it happened the coach didn't leave promptly at all.  Breaking the previous world record school run time certainly got our blood pumping though.  The school had also forgotten to tell parents about a later pick-up time, so in the end we had to come back early.  There was time for sandcastles, sandwiches, an ice-cream and a paddle in the Bristol Channel though.  I'd been awake since 4.30am (I don't do well with stress) so on the way back to school on the coach I snoozed with my mouth open. 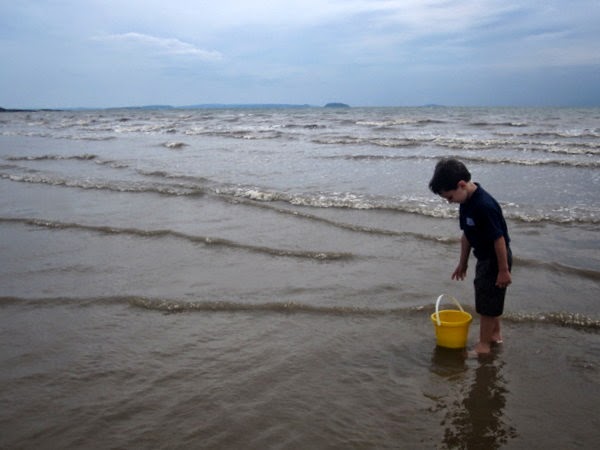 Today I have a huge list and three boys under my feet (INSET day).  So no more time to sit around chatting.  I'm taking a deep breath, and I'm off.  Let's finish with a butterfly (I just happened to have one knocking around).  Actually I think it's a moth. 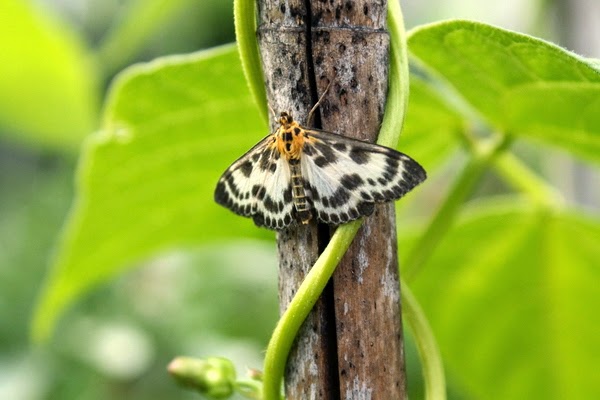 Think of me in Cornwall next week, as the rain moves in.  CJ xx

PS.  Do you think I have time for a quick pass through the yarn shop..?  It hardly seems like a holiday without a new ball of wool, and the fine silk is scaring me, I need to be sat on my own sofa for that.  Two minutes in the yarn shop couldn't hurt surely?
Posted by CJ at 08:47