I've been rushing around this week not getting much done.  I feel like I wrote that last week too.  Maybe I did.  I don't quite know why, but I don't feel that I'm organised or focused at the moment.  Some scattered thoughts passing through my head right now are...

How nice the radishes are, the first of the season.  So very worth growing. 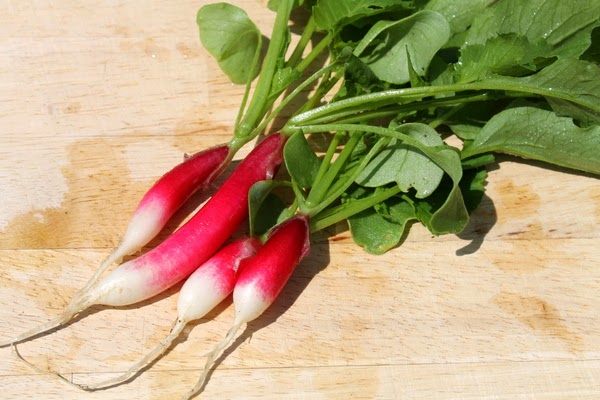 I don't know what to knit.  I finished the scarf I was making, but I haven't photographed it yet.  I have a very empty Ravelry page - this will be my second project.  I'm not sure how many things I should make before I put a link to my Ravelry page on my blog, I'd hate to be a disappointment.

I do have this lovely yarn that reminds me of water and summer and the sea.  I might just knit the same scarf again in this yarn.  Once I find something I like, I often stick with it.  The scarf has a nice texture and a pattern so simple even I can do it late in the evening when I'm tired.  Knit two, knit into the back of the third stitch, purl one.  Sometimes I mess it up.  Imagine what the mess I'd make of something complicated. 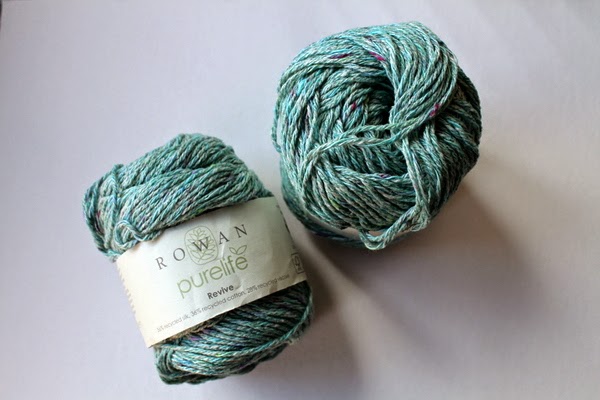 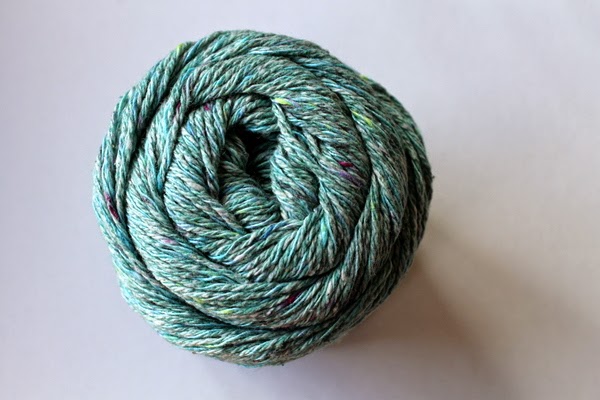 I was reading the lovely blog Down by the Sea this morning, and it make me think about my favourite plant in the garden at the moment.  Nothing flashy, but I love this acid green herb.  It's in a pot with a more ordinary green one, but the yellowy green really catches my eye and it always looks lovely with the other plants.  I think it's golden oregano.  It's one I often pick for omlettes and pasta sauces, but I'd grow it even if I didn't eat it, it's so pretty.  I really ought to try and take some cuttings. 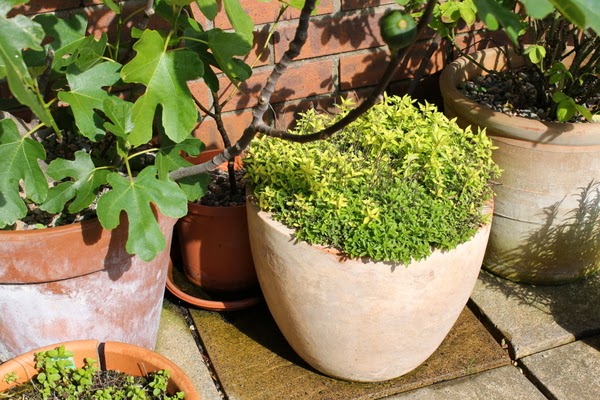 In Aldi today I was seduced into buying this slightly tattered agave.  I couldn't resist.  I'm almost certain I'll buy another succulent next time I'm there.  I have a plant problem, I know.  I never mean to buy them, but they speak to me and I'm putty in their hands.  It almost feels like I am rescuing them sometimes. 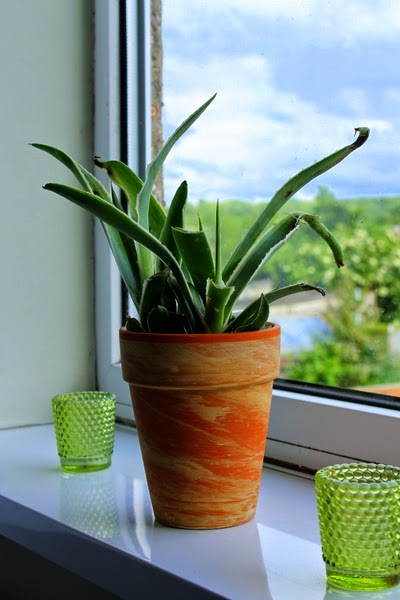 There's been a line from an old rock song trying to be in my head all day, something about agave.  The lines from songs often pop into my head.  I can usually trace where they've come from.  My subconscious is always on the lookout for a subliminal message.  But this line isn't coming through clearly.  Maybe tomorrow, after I sleep on it. 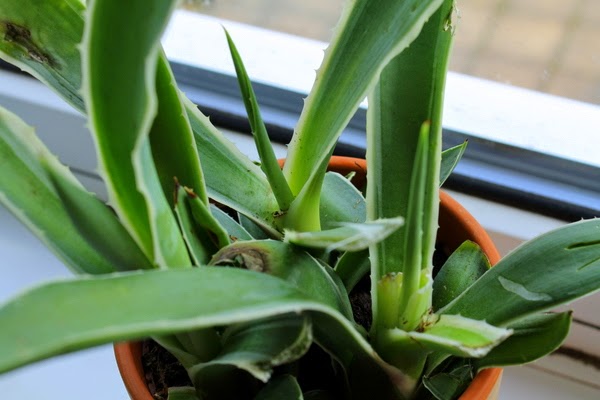 There's something wrong with my phone.  I don't know what but I can't use it and it's another thing to be added to the list of things I need to tackle.

There's something wrong with the way I'm reading blogs.  I can only see about three-quarters of the photos.  I never know how to fix this technological stuff.  I usually just switch things off and switch them back on again.  So far that hasn't worked.  I may have to resort to something more advanced like Googling it.

A storm passed over today.  I spent some time looking out of the window at all of the different colours.  I love the rain so much these days.  An excuse to be inside, at home, while the plants are watered. 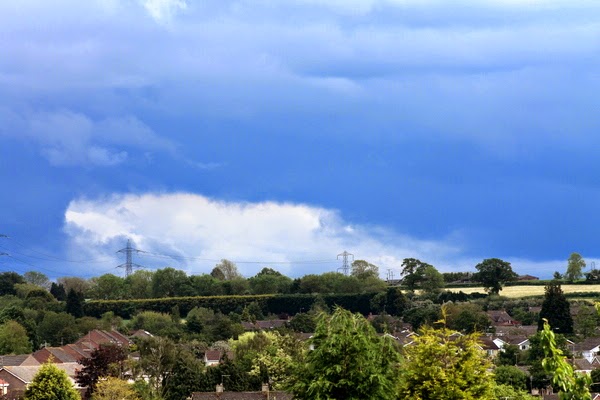 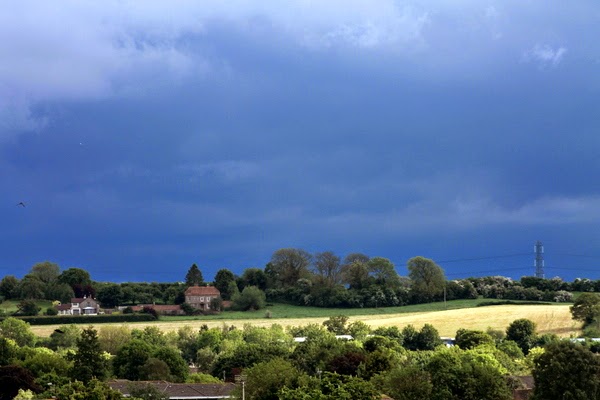 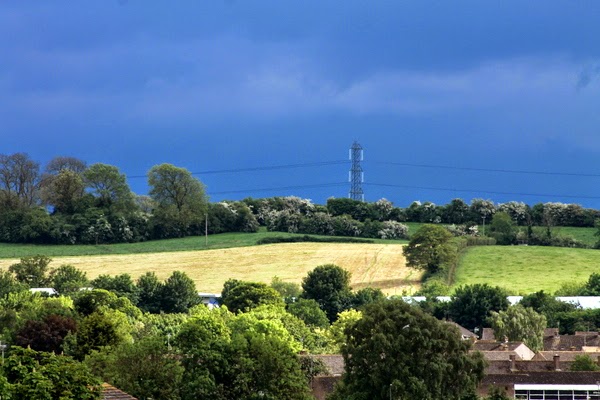 It's been a week of helping out with the boys' things.  School in the forest on Monday with the littlest boy, who stuck to me like a bit of goosegrass from the moment I arrived at school.  We sat together on the coach and he ignored his friends when we got to the forest.  I asked him if he didn't want to play with them.  He said, "You're my friend".  The motto when you're in the forest is "No pick, no lick and careful with that stick".  Not a bad mantra for life either really.  The sun was shining through the trees, there was a wildflower meadow to roll around in and a fire with toasted marshmallows.  I wouldn't have missed that afternoon for the world.

In the evening I went to different woods with the middle boy's cub pack.  It rained and I didn't have a coat, just a t-shirt.  I told them that I'd been specially trained by Bear Grylls (who's the Chief Scout) to survive anything.  Otherwise it would have looked as though I hadn't Been Prepared.

Yesterday evening I did softball with the biggest boy's scout troup.  At ten he is a brand new scout.  Some of them are fourteen.  It was quite an eye-opener.  Teenagers.  They were big and loud.  I am nowhere near ready for that kind of intensity.  They did make me laugh though.  And I did see the odd hint of maturity and decency which gave me hope.

It did remind me to enjoy the moments of smaller people though.  I'm wondering what to read to them next.  We've just finished The Outlaw Varjak Paw by SF Said which they loved.  When I first brought it home from the library they weren't interested.  But when I read it to them, they absolutely loved it.  The trick is getting them to try something new. 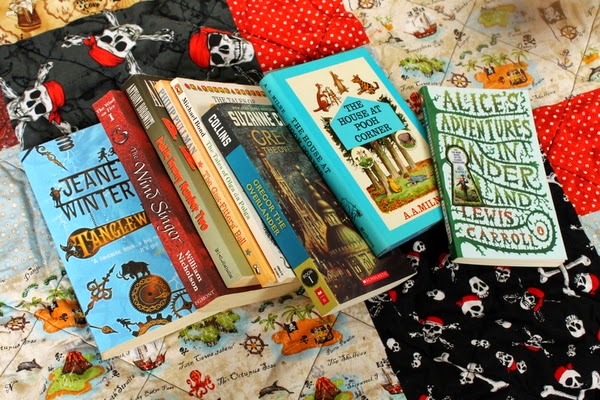 Some of these are too advanced to be read to the littles.  I'm leaning towards the Philip Pullman.  I'm a huge fan of his, he has a little magic in his writing, it is always entrancing.  Someone (the Observer?) said something to the effect of "Is he the best storyteller alive today?"  Well yes, I think he is.  When I read His Dark Materials trilogy I actually kept stopping to say, "This book is so good".

And so the week bumps along.  I can't help thinking that next week maybe I'll be organised.  Although as it's half term I very much doubt it.  The week after maybe.  I am trying.
Posted by CJ at 22:18