Every dog and his day 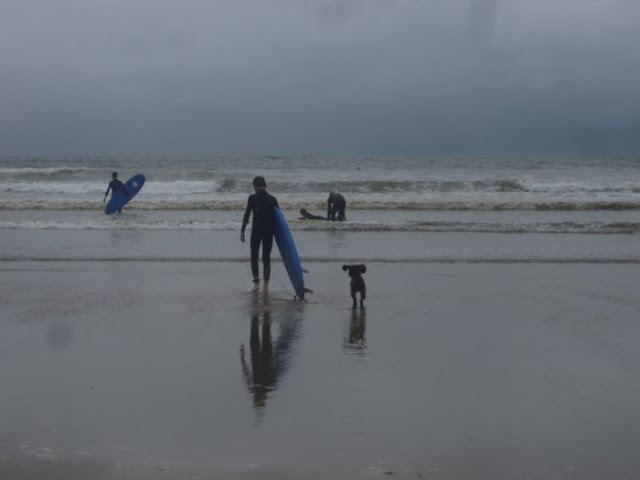 It was a wet dog walk this morning. But we did it anyway, Bertie finds it tricky to be good all morning if he doesn't have a proper early gallop along the stream and over the green. We bumped into a cockapoo chum, and her person told us it was National Dog Day. It seems that almost every day is National something or other day, but after a year and a bit of dog ownership I think dogs do probably deserve their own day.

The above picture is one of the most recent I have of the Bertster. He puts a huge amount of effort into trying to keep his pack together and safe, and watching them heading out into the surf is a bit disconcerting. We spent many hours on beaches last week, and he didn't sit down on the job once, he was constantly on the go, checking up on us, making sure he knew where we were and rounding us up from time to time.

After dark he barks at outdoor noises, making sure they don't come in and attack us, whatever they may be. On a walk he tries to be fierce and brave when the situation requires, even though he's really a meek, submissive little chap and often lies down when a big dog approaches. In fact he lives in constant fear of a very bouncy labradoodle that rolled him over by accident once. But despite being scared, he gives it all his best shot.

I don't think I really understood the dog/human bond until Bertie came along. Everyone in the house has their own relationship with him, their own games and routines and fun things to do, and their own moment curled up on the sofa with him and his unconditional love.

He is always thrilled to see me; dog-owning friends will no doubt understand that. If I pop out to the postbox, about a minute away, he greets me when I get back with pure ecstasy, as if I've been gone for a week. When he's not being adorable he chews the washing, the cushions and the rug. He gets under our feet and in the way and is constantly on the lookout for unattended food. If he gets hold of something he's not supposed to have, he won't come back. He finds it a great game that he's initiated, with the whole family trying to catch him and him outwitting us all.

He makes sure I get plenty of exercise every day and he's made us a member of the dog walking fraternity, where everyone says hello and often stops for a chat. I've reconnected with old friends and made new ones, just by having a dog by my side. I've spent more time in the countryside than ever before, which everyone knows is good for the soul, especially for someone who works at home.

He loves it when we really concentrate on him, asking him to do things and communicating with us. Sometimes he doesn't get it, and puts his head on one side and tries and tries to understand us. If we had a conversation, he would probably say, I'd like more sausages please, let me come and sleep on your bed and don't ever go anywhere without me, ever, please.