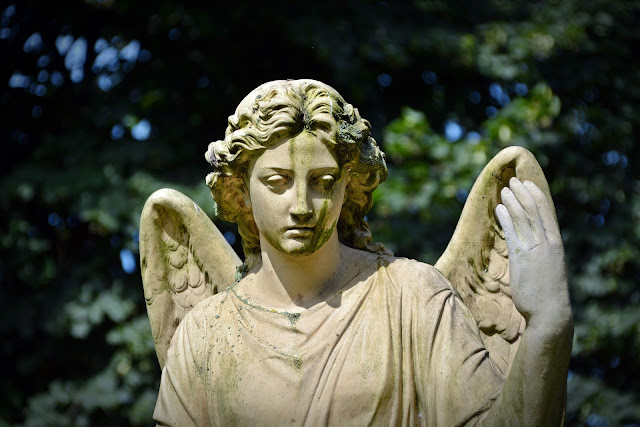 December is speeding by in the usual flurry of glitter and lists. I write them on the back of scrap paper and those slips the library puts in reserved books. There are always more things being added than crossed off.

I went to a funeral this week of a second cousin. I wasn't going to write about it, but I have all these thoughts that I just want to put somewhere. She died suddenly, having been in good health, and everyone was shocked. She was the most truly good person I have ever known. Everything she did was for other people. She lived a life of service and selflessness. I thought one day she would be old and it would be her turn to have people visit her and do things for her. It seems unfair that that is not to be.

She never married and never left home, and after her elderly mother died she spent every Christmas season in London working in a homeless shelter. She kept in touch with every friend and relative she  had, visiting, writing letters, inviting people to her home. She had planned her funeral, down to the last detail. Every hymn, poem and prayer was carefully chosen. She specified that no-one was to give her any tributes, 'even supposing you could find anyone willing to do so'. That made me cry. The church was packed, absolutely packed, and every single person could have spent an hour paying tribute to what an amazing person she was.

She cared for the natural world and asked for a funeral with as little environmental impact as possible. Recycled paper for the orders of service, car sharing to the little church on a hill where she was to be buried. She loved being with friends and family and sharing a meal with them and wanted hospitality extended to all who came to the funeral. There was a lovely spread in the church and photographs from her life.

She was generous, kind, clever and possessed of a deep, unwavering faith. She truly embodied Christianity. I doubt she was ever once irritable or judgemental or anything less than charitable. She treated everyone she met with the same friendliness, courtesy and genuine interest.

I know that by writing a tribute I am going against her wishes. But when someone that unique leaves this world it is hard to let it pass unmentioned. I left the funeral wanting to be a better, kinder, more patient person. Her example was shining. An overused phrase, but in her case, apt.

I woke up early this morning with these thoughts running through my mind. And the feeling that she was gone too soon. I sat in the chilly early hours to write some of the things down, just to remember things I don't want to forget. There are many memories of visits to her when I was little. I shall write them somewhere else, just for me, there are too many to put here. I used to love walking her dog with her and her mum. I was allowed to hold the lead and it was just the best thing. The littlest boy would have loved that too.

Their home was peaceful, tranquil. I was allowed to borrow an Anne of Green Gables book when I visited, and it was such a treasured thing. Her mum, my great-aunt, would make the most delicious tea and there would always be cheesies which were also the best thing. I asked for the recipe many years later. And now I'm so glad I have it. Sometimes things are left too late.

On the day of the funeral it rained and rained, but the sun came out at the end of the service and shone through the windows for a moment. It was incredibly moving. Her final resting place is at the top of a little hill, looking out for miles over the beautiful countryside. We stood around the grave and the wind howled and the rain lashed down and it all felt right, as it should be. The wildness of it all. I shall visit and leave flowers sometimes. I won't forget to visit and I won't forget the force for good that she was. I am so grateful for her life and for her example of how to live and for having known her.

I hope that hasn't been to heavy. An interlude among the holly and the glitter. When I got home I put my umbrella up in the biggest boy's room to dry where the puppy couldn't get to it and destroy it. Late that evening when I was in the living room there was a bit of a thump. The biggest boy came down and opened the door and said 'Sorry, I accidentally stood on your umbrella.' He had it dangling from his hand, more comprehensively destroyed than even Bertie could have managed. Spokes dangling, canopy crumpled. It had to be seen to be believed. I told him, "Never mind."
Posted by CJ at 10:25