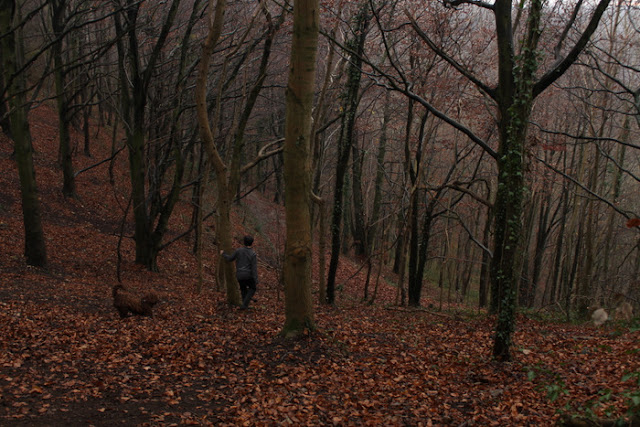 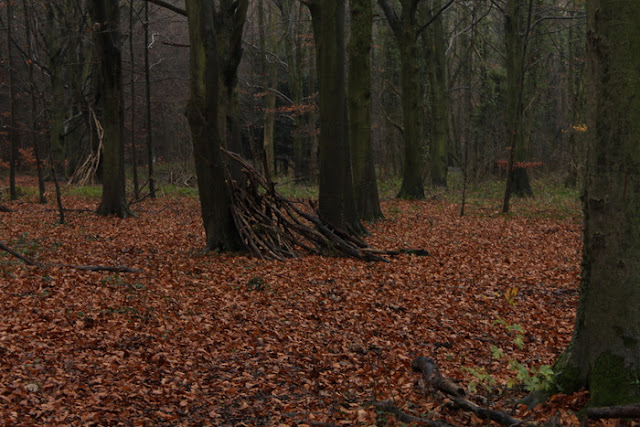 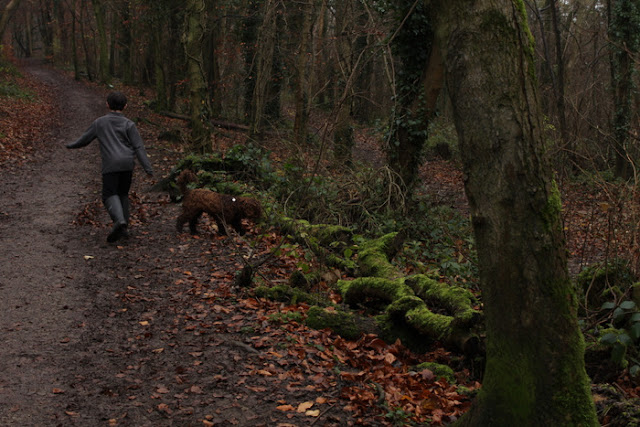 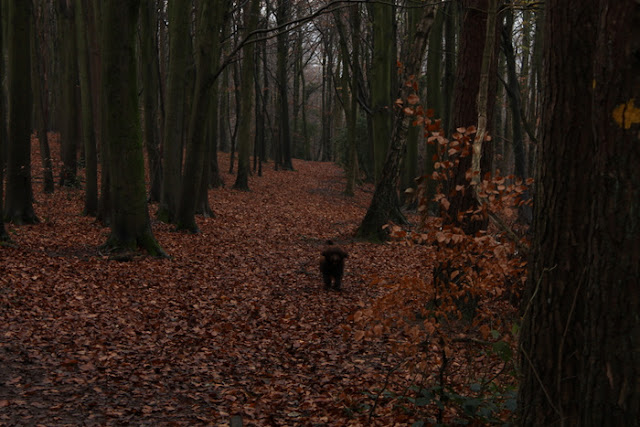 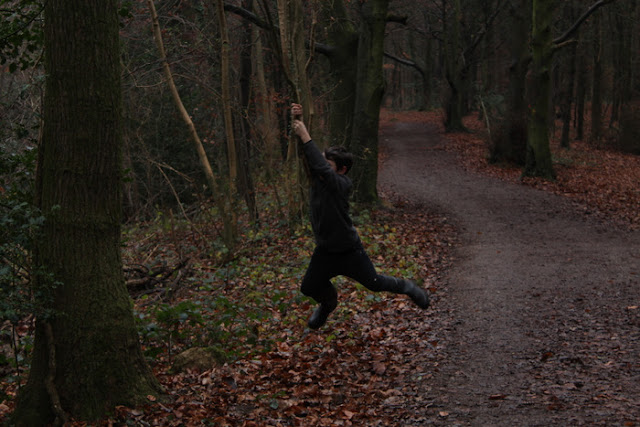 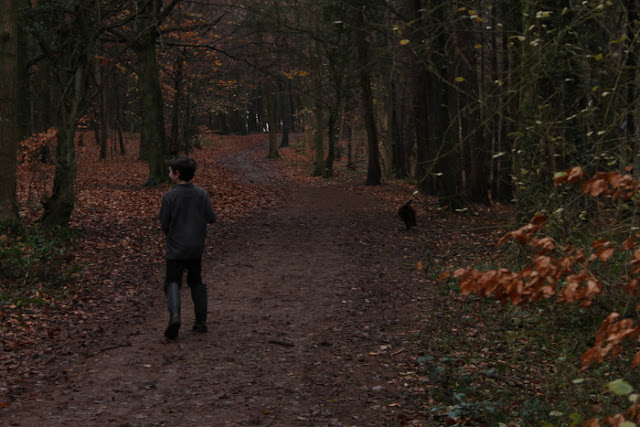 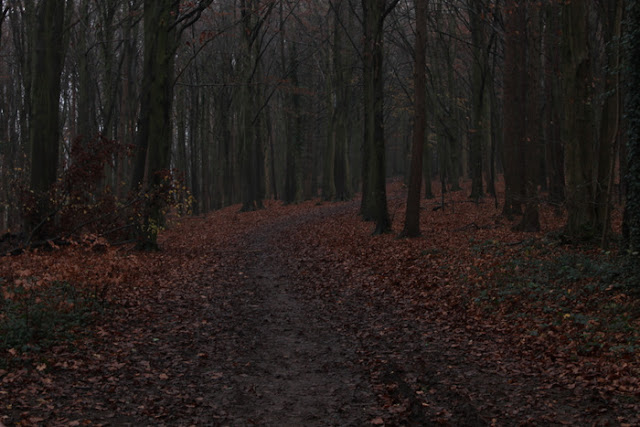 Regular readers would be forgiven for thinking that I spend my entire life blithely skipping through beech woods in pursuit of the little brown dog. The little brown dog no doubt wishes it were so; woods are absolutely his favourite thing. The sticks for running around with! The rustly leaves for running through at top speed! The smells, oh the smells! Someone said to me the other day they'd like to have their dog's nose for a day and see (well, smell) exactly what it is that they can smell. A single spot can warrant a full two-minutes' sniffing. So much information to glean.

In the woods above Stroud we found a whole load of dogs exactly like the little brown dog only in different colours. Cream ones are pretty, but oh how they show the mud. Bertie can be top to tail mud and we can just ignore it.

Inside the house there has been a tiny bit of knitting, an even tinier bit of reading and the odd bit of baking. 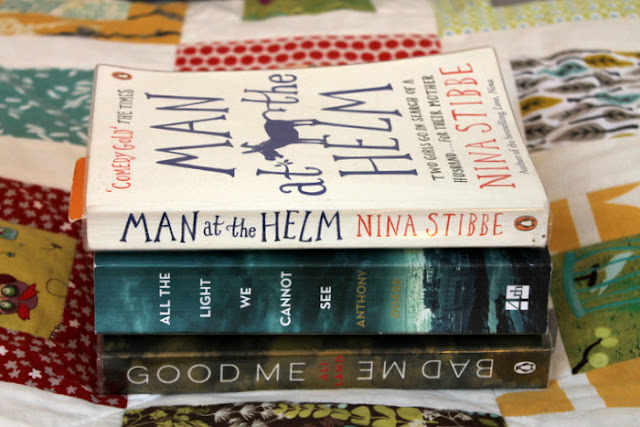 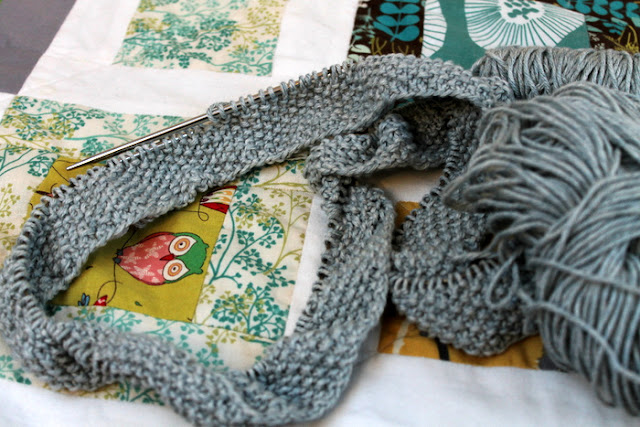 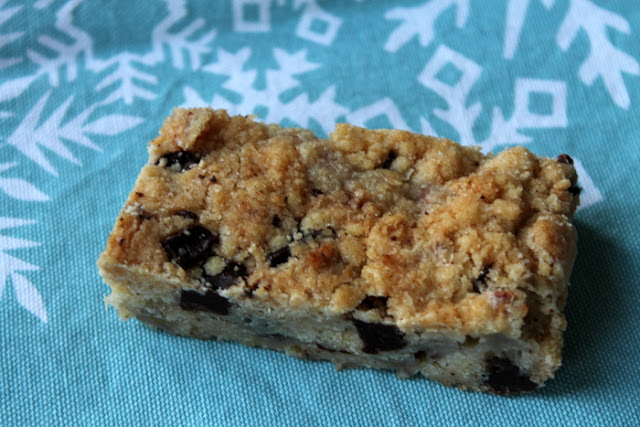 I made Delia's banana and chocolate chip slices with some leftover bananas. They were a triumph. Well, the biggest boy loved them, which pretty much equates to the same thing inasmuch as it means they will all be eaten really quickly. I was happy to find a good recipe that uses up leftover bananas, quite often I'm not keen on banana things, but these were delicious. And probably the foundation of Norwich City's rise to greatness. (For those from faraway lands to whom the words Delia and Norwich City mean nothing: Delia is Delia Smith, one of the original tv chefs who pretty much taught the nation to cook and Norwich City is her football team.)

No more inside photos I'm afraid. There are no exquisite little magazine quality corners to photograph around here, it's mostly boots set out to dry and damp washing. I was going to post a picture of my dying desert rose plant and ask for suggestions, but as the rest of blogworld is all glitzy and pretty it just seemed too tragic to show. I've tried everything, but it's not happy. Any suggestions gratefully received. It might have started when I repotted it. Or when I took over ownership of it... Maybe it just misses the desert. The southwest UK is a long way from sub-Sarahan Africa. Anyway, I shan't give up until the fat lady sings.

I spent yesterday evening repairing a big rippy hole in the biggest boy's favourite coat. He made the mistake of carrying his skateboard up against it and the grip tape (sandpaper-type skateboard top) ate straight through it. The repair necessitated finding a ruler, of which there must be about fifteen in the house, I know because I KEEP BUYING THEM, but do you think I could find one? Where do they go???

Talking to the biggest boy while I mended, I discovered that some bloke I spent a day with last year on an eco thing we were doing is actually a sort of tv celebrity. I had no idea, thought he was just a normal person. But he was an actual real life celebrity! How did nobody tell me? I could have been all sorts of embarrassing if I'd known.

Off now to get to grips with the weekend. Because in December I find that's the best I can hope for. It will be a fast madness of end of term appointments and shindigs and football and of course dog walks. Maybe they are all that's keeping me sane.
Posted by CJ at 16:20