Badgers, sweetcorn and a pain in the neck 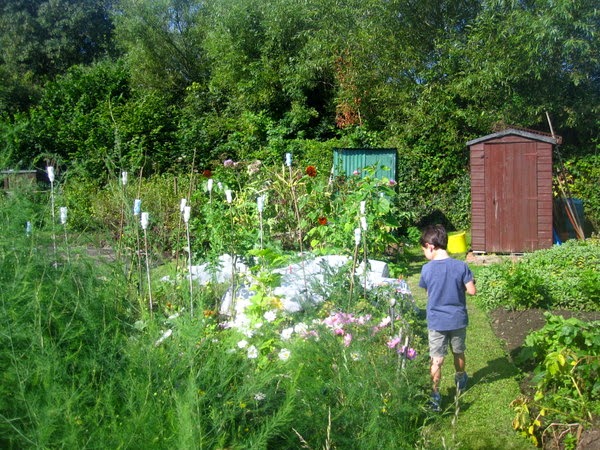 You know when you've been told that a certain disaster will happen because it always does, but you cling to the vain hope that in your case it actually won't?  And then it does.  Well, that happened.

We'd been told that all sweetcorn at the allotment is eaten by badgers the minute it's ready.  But the middle boy wanted to grow sweetcorn, and the littlest boy had his heart set on popping corn, so we planted it anyway.  And it was almost ripe, and I was living in hope.  And then this. 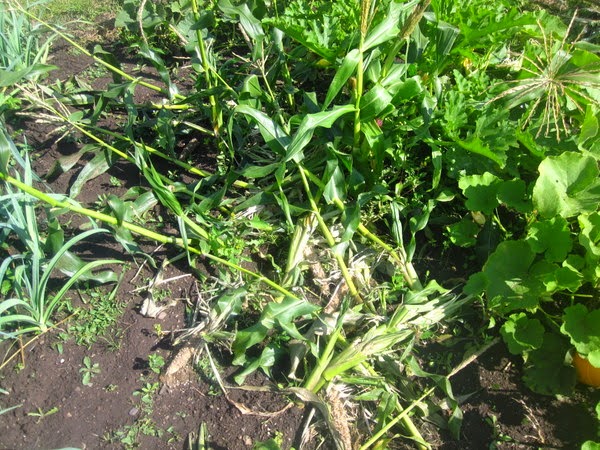 All except two plants (one of each) mashed into the ground, and almost all of the corn eaten.  The littlest boy said, "I wish badgers didn't live in this country".  They'd somehow stripped out the corn from inside the leaves, leaving empty husks. 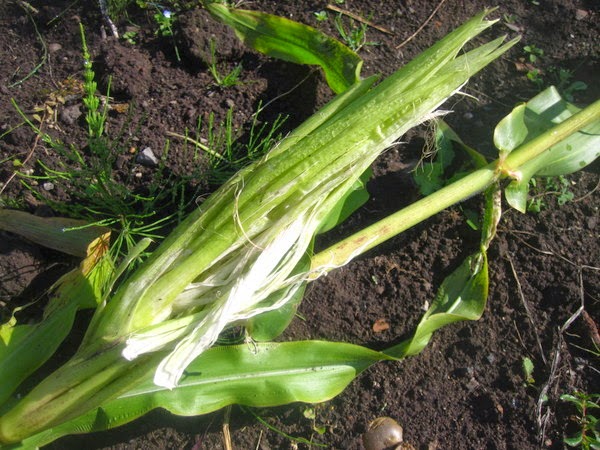 Oh well.  Onwards and all that.  Next year we'll try them at home and plant something else at the allotment.  We're over it.  At least some of the sunflowers survived. 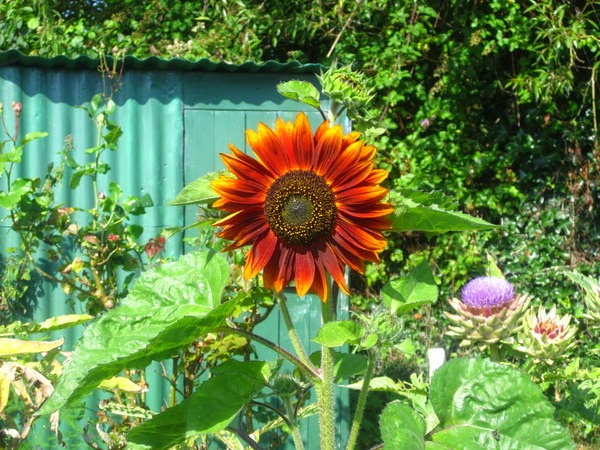 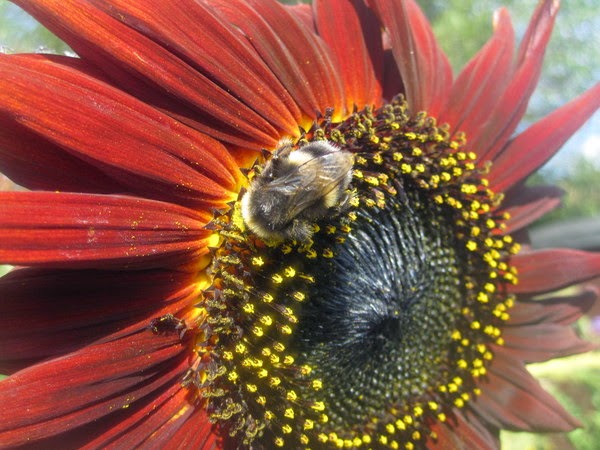 The bees absolutely love them.  Between the sunflowers and the artichoke flowers, they're in heaven.

A single solitary sweetcorn survived the badgers.  It wasn't a big one, just small and sweet.  We debated who should have it.  Someone small, sweet and deserving. 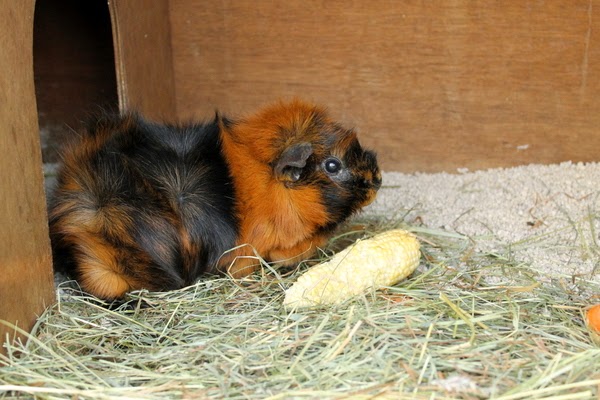 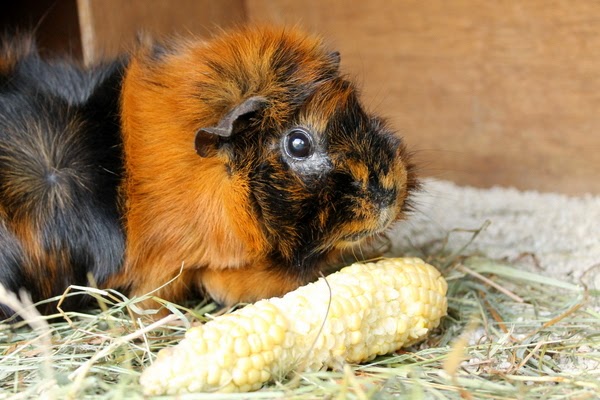 The littlest boy's little patch of garden is looking good.  Lots of bee-friendly flowers, and all sorts of different bees.  It's all taller than he is now. 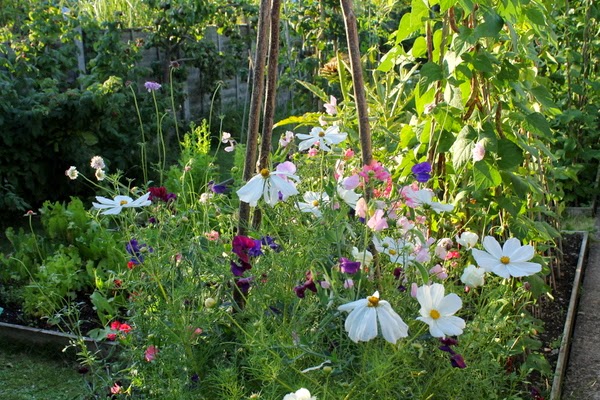 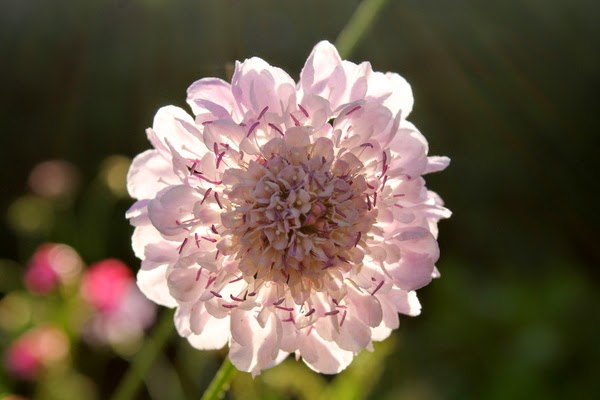 We've been thinking about what we might plant next year.  Maybe some square foot gardening, where the 3' x 3' plot is divided into nine squares and each square gets a different crop.  The biggest boy helped the others decide what they might plant and even drew diagrams.  He wants to grow herbs himself.  I'm thinking we might visit a local herb farm and have a wander.  I haven't planted this idea in his mind myself, honest...

It's been quite a hard week and a half around here.  My cold dragged on in an unusual kind of way.  I've had a headache every day since it began about twelve days ago.  And a heavy feeling in my head.  It coincided with a crick in my neck, which also got worse and worse.  I felt quite exhausted as well - not a good feeling for the summer holidays with boys needing to be entertained.  Thursday and Friday were particularly bad.  I took a painkiller on Thursday because my head hurt so much.  This is so unlike me - I literally haven't taken one for years and years.  On Friday I took the boys to a park about half an hour's drive away.  I felt so grotty I ended up lying on the picnic blanket under an oak tree - despite all the lumpy little acorns.  My head hurt and my neck was stiffer than ever.  Last night it occurred to me that the stiff neck was connected to feeling ill.  I Googled it all, and came to the conclusion that it's probably viral meningitis (not the scary bacterial one, thankfully).  I'm feeling quite a bit better today, and grateful for living somewhere where there's healthcare available if and when needed.  Hopefully next week I'll be a bit more on the ball, I feel that I haven't been doing particularly well when it comes to the boys.  The summer is short, I'd like it to be a good and memorable one for them.  Tell me, what plans do you have for the rest of the summer?  Grand plans and small plans, I'd love to hear them.
Posted by CJ at 21:41