And so another summer holiday week has flown by, in the blink of an eye.  It was a good one, although somehow the littlest boy and I managed to catch heavy colds.  I can't imagine where we got them, we've hardly been inside with other people at all.  I don't remember the last time I had a cold in the middle of summer, it doesn't seem right somehow.

But we've been doing all the proper summery things, meeting with friends from afar, going on picnics and splashing in various bits of water in the sunshine.  Somehow I don't seem to have any photos of it all.  I don't know what's happened, it used to be that I'd take a photo every day, just little reminders of the small everyday things that make up our lives.  Things that were once so familiar, but now when we open the albums we say, "Oh yes, remember when we used to do that all the time."

Looking at old photos is a favourite thing to do.  Every so often, after a meal, we'll sit round the table and pull out an album and spend some time exclaiming over the pictures.  "That's when you fell in the mud", "That was that ostrich that bit dad", and "Remember Baby Jail!" (the biggest boy would occasionally put the littlest boy under the table where, confused by all of the table and chair legs, he would be unable to get out and he'd sit there and cry).  Oh how we laugh.  (Now, not then.  Although one or two of us may have laughed back then, before being told off).

I need to get back to having those photos in our lives, so I think I might try Susannah Conway's series of prompts, The August Break, to get me started.  I cut down on the amount of photos, initially, because some days they just weren't particularly interesting, but it was a gradual slide from there to suddenly realising I've stopped taking all of those pictures that record our lives and preserve our memories.  I missed yesterday's prompt, but I'm writing down the list, I'll stick it in the kitchen, and I'll give it a whirl.  I like to look at a list of days and ideas and wonder, what will I find, what will we do, what memories will we have by the end of it.  I do so love an adventure, and what are the summer holidays if not an adventure.

A post with no photos doesn't seem right though, so I'll share the shots I do have.  Strangely they are all inside ones.  Again, I think the boys were finding it hot outside until mid-week.  Card houses have continued apace, albeit with quite a bit of scrapping.  A downside of card house building is how easily they can be knocked over in a moment of brotherly annoyance.  Yesterday the marbles came out, as they do from time to time.  This tends to get a bit shouty after a while too, but to start with everyone enjoys it. 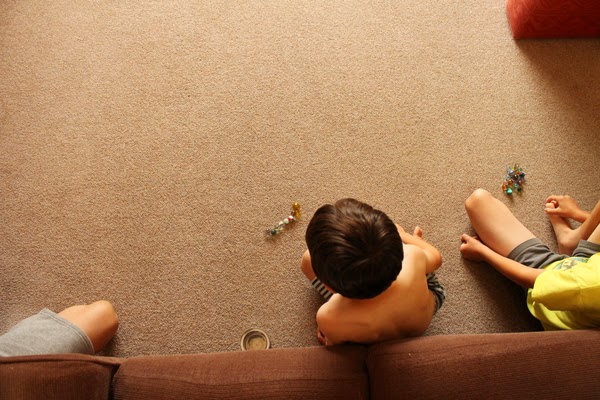 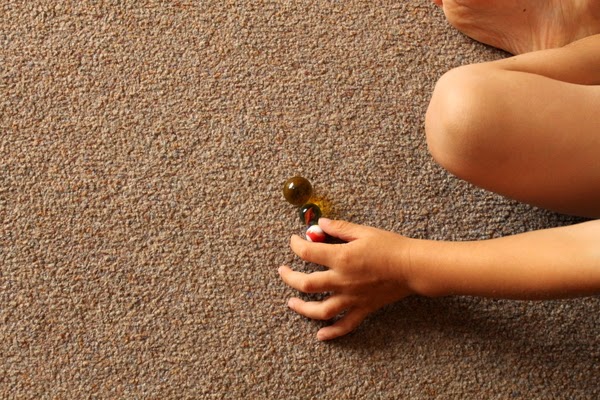 It's been nice to see the Playmobil boat played with as well, sometimes it sits for ages without being touched, and I think, should I get rid of it?  But no, I don't think I should, not quite yet.  When the holidays arrive and there is time to play and be imaginative, all of the old toys come out.  It's good to see. 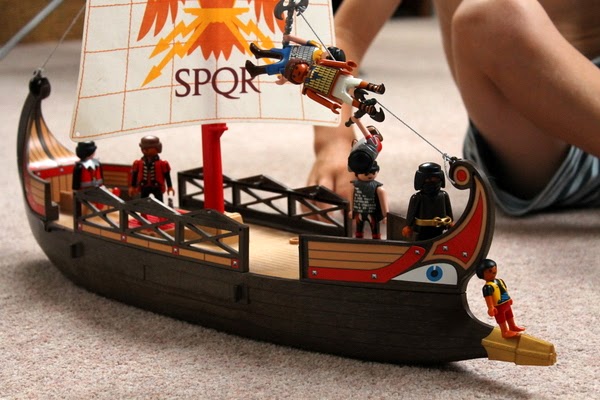 This is the little old Lego house that I used to make over and over again when I was little.  Still looking good, although they've forgotten the television aerial and the trees.  It's not really finished until the trees are up. 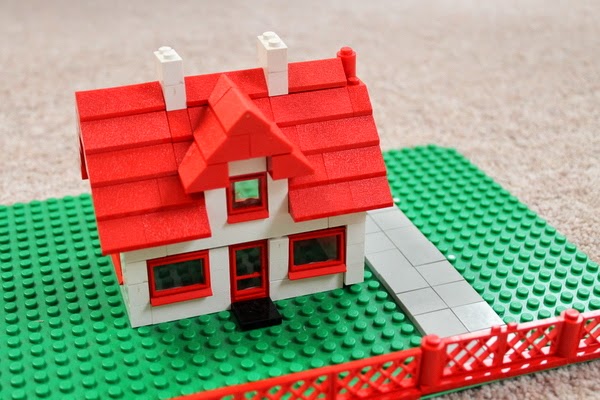 We went for a little walk yesterday to take the biggest boy to a friend's house.  All along by the streams that criss-cross the town.  We picked up hazelnuts and sycamore keys and saw more cats than you could shake a stick at.  The littlest boy told me there was a hole in his shoe and his toe was on the ground.  There was!  How on earth did that happen??  I knew it was wearing through, from all of the running and jumping, but I had no idea it was that bad.  We made an emergency trip to the Mall to buy trainers.  Oh my.  The first shop didn't have his size, so we had to go to a second.  We waited twenty minutes, and the counter only turned from 04 to 05.  We went for a wander for a brief quarter of an hour.  When we got back the counter said 23.  We were number 12.  Did we step outside of the space-time continuum???  (We did go to the Wallace and Gromit shop, so it's possible we did.  If anywhere is in a bit of a loop, it will be there.)  It was about a hundred degrees, my head was pounding, the children were tired and hungry and the littlest boy spent the next twenty-five minutes climbing on me and standing on my feet while we waited for our new number to come up.  I briefly lost the will to live.  When it was our turn, the littlest boy picked fluorescent green trainers.  I tried to steer him towards the muted blue.  A meltdown ensued.  But she who pays the piper picks the trainer colour, so he has blue.  I fear it won't always be that easy, if I can barely hold the line against a six year old.  Let's not think about that though, right now I'm still in control.  Almost.

Today is the start of football training, can you believe.  It's raining, I have a cold and I will be required to stand outside in the wet.  It almost feels like...  No, I won't say it.
Posted by CJ at 07:18