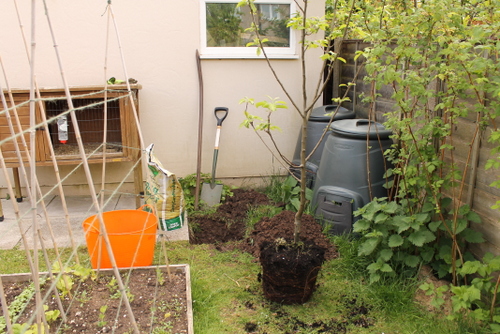 I've had this little apple tree in a pot for a while, and it felt like the time to release it into the garden.  There isn't much space, bearing in mind the need for a football pitch in the middle, so it has been squeezed in between the guinea pigs, the garage and the compost bins.

I had about 45 minutes this afternoon before school pick-up time - not long, but once I have an idea in my head I like to crack on.  The main problem with the garden lies from about 6-18 inches below the surface of the soil.  In goes the spade, and then bang, you hit rock.  It's in a big layer all over the local area, in fact I think it runs all the way down to the river.  At nearby Aust you can see various different strata in the cliff, and our layer is in there somewhere.  It makes digging a real nightmare.  When we moved in we found a huge and incredibly heavy iron spike in the shed.  We wondered what it was for, until I tried to dig a hole, then it all became screamingly clear.  It's for manually breaking up the rocks.

Over the five years we've been here, I've excavated mountains of the stuff.  Fortunately for the most part it's slightly crumbly, and after a few good whacks it tends to break.  But nonetheless it is such hard work.  My next-door neighbour has helped me quite a bit, using a pickaxe and crowbars of varying sizes.  After I dug the raised beds and the pond I spent weeks ferrying tons of the stuff to the Sort-It centre.

So a quick tree-planting is never a realistic proposition.  But once I'd started I had to press on.  I hammered away like a maniac for half an hour, and eventually had a hole that was just about big enough.  Obviously it's not ideal growing trees on top of a layer of rock; I always try and make sure there's a bit of good soil underneath to start it off.

I did all the stuff Alan Titchmarsh recommends - manure, blood, fish and bone, firming it down, watering.  No stake, because of the rock - they just don't go in securely enough.  I usually wait until the tree leans and then knock up some sort of makeshift pulley system.  Not what Alan recommends at all.

Anyway, this was the finished effect, right before I zoomed off to school. 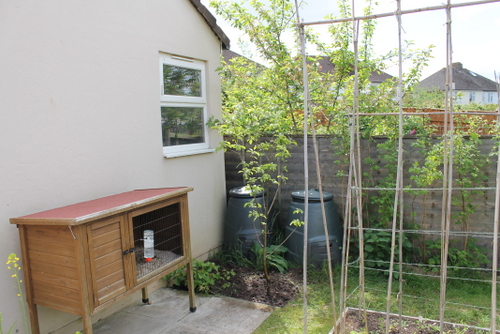 The tree is a Worcester Pearmain, which is a tip-bearing apple, so I haven't pruned it so as to leave the tips where the fruit should form.  There is hardly any blossom this year, which is fine.  It can spend a year establishing and hopefully next year there will be more.  It does seem to suffer very badly from aphids, to the extent that the foliage becomes completely distorted.  I'm hoping that it will grow and strengthen and be able to cope with the attacks a bit better. 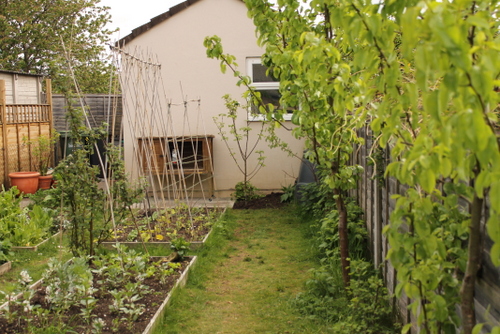 This is the view from a bit nearer the house.  Raised beds with broad beans, runner beans, sweet peas, salad leaves and a particularly thorny tayberry.  On the right are two pear trees (Doyenne du Comice and Beurre Hardy), a gooseberry, which has just gone in to replace a rotted rhubarb, and raspberries.

When we moved in five years ago, there wasn't a single plant anywhere.  Just lawn and patio and fence.  Gradually I've added things, mostly things to eat, but I always have to keep a bit of a space for boys to run around in.  Maybe one day I'll find a spot for some shrubs and flowers, but for now it's all about the food.  Fortunately some of those have good flowers too.  At the moment there are strawberries, broad beans and the ever beautiful apple blossom.  Lovely. 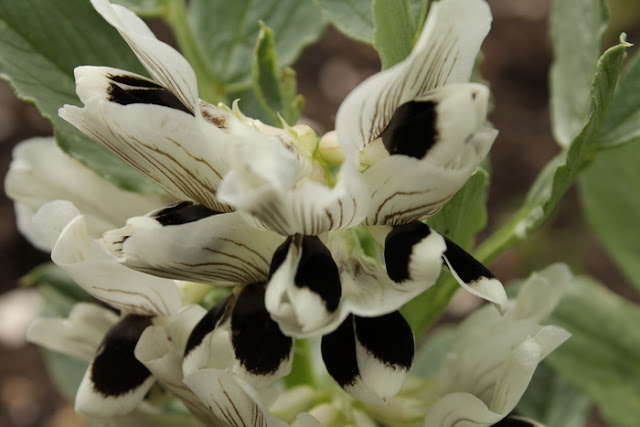 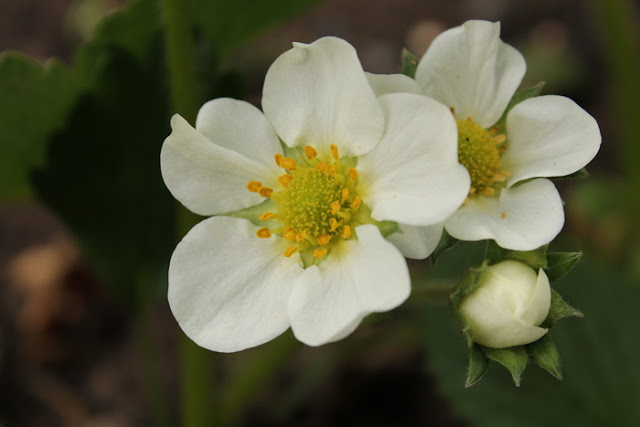