Plum blossom and a promise of figs 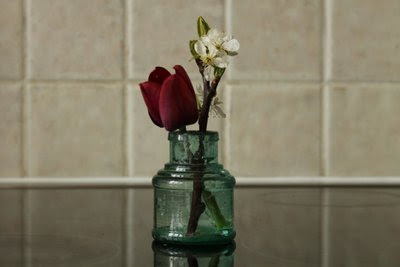 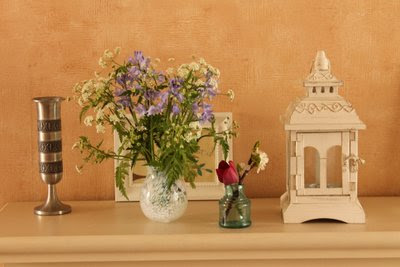 I had a bit of a nasty shock at the allotment on Tuesday.  As well as the beautiful spring flowers and buds and shoots, the weeds had leapt up in my (ten-day) absence and taken the place over.    And as well as the weeds, the green manure from hell had  risen from the dead for the third time.  I really cannot imagine what possessed me to plant it back in the autumn.  The books all say, "Just dig it in in spring and let it die back".  Oh puh-lease - I have hacked at it over and over again, and still it is springing back up.  On Tuesday I resorted to squeezing all the earth off of the root systems and leaving them exposed in the sun.  What's the betting they will somehow survive this as well.  By the time I'd done all this, and pulled out the weeds that looked as though they were about to spread their seeds everywhere it was almost time to go.  I straightened up and looked longingly at the plot next-door-but-one to me.  This is what I think of as the Chelsea Garden Show plot, so immaculate it is.  I noticed their plum tree, covered in blossom, and then remembered - a couple of weeks ago I planted a tiny plum tree on my plot.  I looked over and, lo-and-behold, plum blossom.  That cheered me up no end, it really did.  A little bit had broken off, so I brought it home and put it in a vintage ink bottle with a Havran tulip from the garden that had been footballed.  Sometimes just a little blossom is enough to put everything right.﻿ 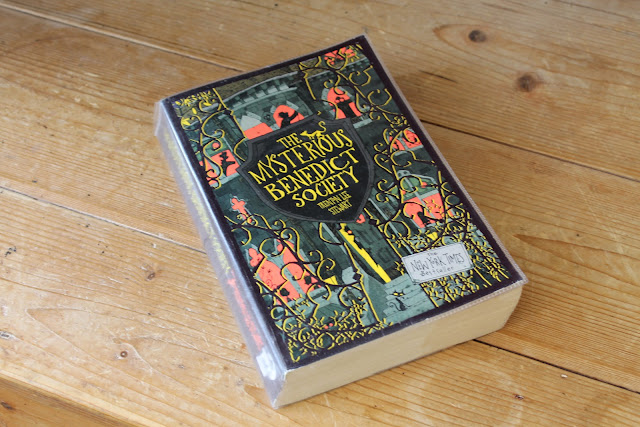 Having just struggled through a particularly grim Scandinavian crime thriller, I felt that something more fun was in order.  The boys couldn't understand why I would bother finishing it if it was rubbish, and I see their point.  Children's writers don't have long to get their readers on side, otherwise they are off to find something else.  I came across "The Mysterious Benedict Society" at the library and borrowed it for the eldest boy, who is 9.  But while it was sitting on the shelf waiting to be picked up I decided to try it myself.  I like to read what they are reading from time to time, just to see what the content and quality of writing is.  I really enjoyed "The Hunger Games" trilogy last year, but the content of the last book made me decide that it wasn't for a 9-year-old.   So I am a few chapters into "The Mysterious Benedict Society", and so far so good.  I am sure the eldest will love it - sometime he just needs to see me read something first to encourage him to pick it up. 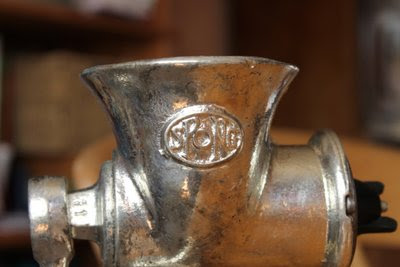 Something else new around here is this thing of beauty - a Spong mincer.  I bought it on Ebay a few days ago, and I used it for the first time this week.  I often buy organic meat if I can, and this means that I can buy an identifiable cut and mince it myself for bolognaise and things.  I bought some beef and made burgers and everyone ate them (except me - vegetarian), which is something of a red letter day.  Chilli next I think.  I love the simplicity of the design; I remember them from when I was little, and the same Spongs are still going strong now.  And the name!  I haven't missed a single opportunity to say "Spong" really loudly since it arrived.

Finally a little loveliness from the garden as well as a tadpole which is lovely in its way but makes me feel ever so slightly like shrieking. 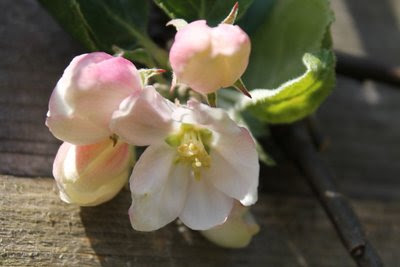 The very first of the apple blossom - it's a Ribston Pippin, which is one of the most delicious apples imaginable.  We don't get many because of the flying footballs and small boys who get tired and cross and pull off little apples when they don't get their own way, but when there is one it's sublime.  And apparently very high in Vitamin C, so good for you too. 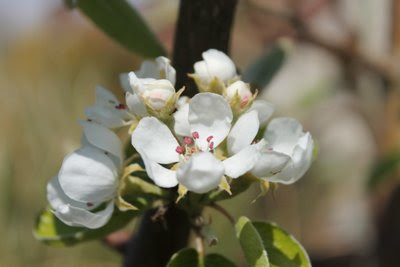 And there's pear blossom too, masses of it, just like last year, although last year we didn't have a single pear so hopefully we won't get a repeat of that. 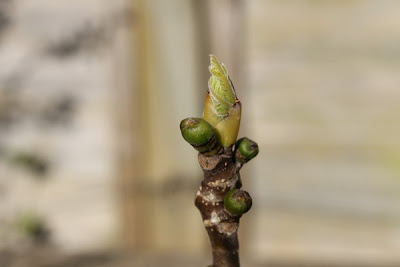 The promise of figs on this potted tree.  I am absolutely in love with fig trees and I've got three or four in pots.  It would be lovely if they started giving us the odd fig.﻿ 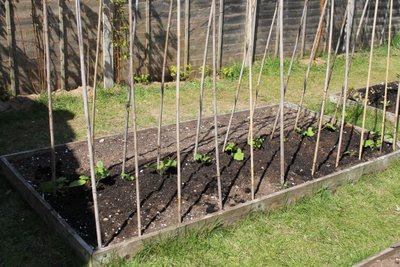 Bean sticks up, runner beans in, summer on the way.﻿ 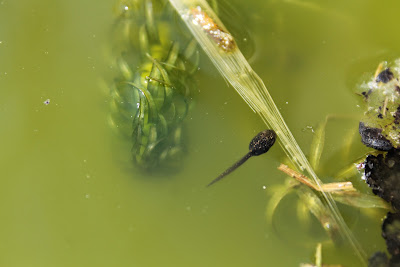 ﻿
Aagh!  No idea what I'll do when there are miniature frogs hopping about the place.  I didn't really think this pond idea all the way through...
Posted by CJ at 16:27