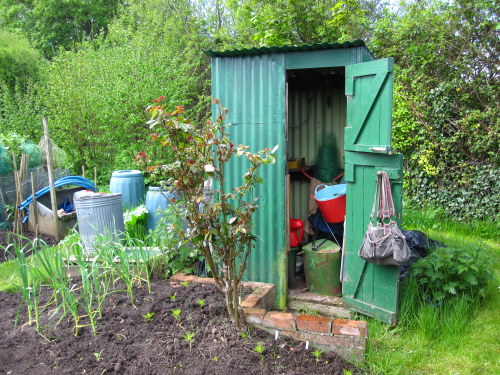 *With apologies to Lou who of course has the Little Green Shed.

I put in an hour or so at the allotment this morning while it was dry; the weather man says rain tomorrow.  While I was pottering around the shed I noticed some bees flying in and out of the holes in the side.  The shed is a curious construction, with corrugated walls and partly lined in wood.  It has a number of holes drilled in the corrugated part, and the bees were going in through them to the space between the outer walls and lining.  (The shed also has a bizarre upside-down door which is split into two.  It's odd, but I love it.) 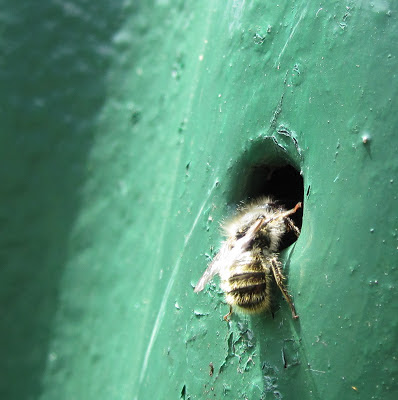 Well, I always wanted bees of my very own, and it seems that now I have some.  Hopefully they will stick around and pollinate anything that needs pollinating.  Not sure what type they are.  They were quite difficult to photograph, and bearing in mind that I was supposed to be tackling the vast quantities of weeds that have appeared and not standing around photographing bees I didn't spend too long on them.  But another day when I have more time I shall investigate further.  Anyway, I am thrilled, particularly as bees numbers are suffering and they are such amazing little creatures.  I'm a bee fan! 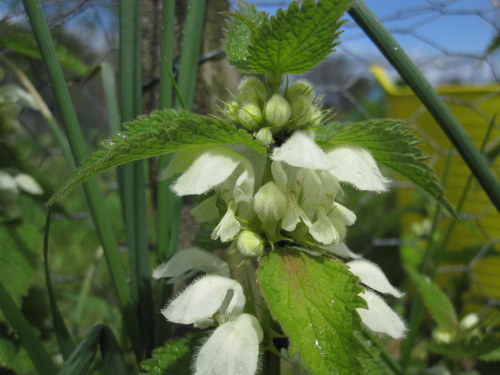 This is a "weed" I'm deliberately leaving on the plot.  I've heard they're good for wildlife, and they really are so pretty.  White dead nettle I believe.

But on the other hand this one... 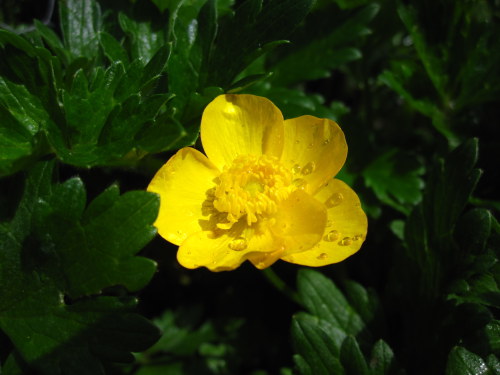 ... will have to go.  Very striking after a quick downpour, but nonetheless there isn't room for everything and we need vegetables more than buttercups.  Not today though, it has a short reprieve. 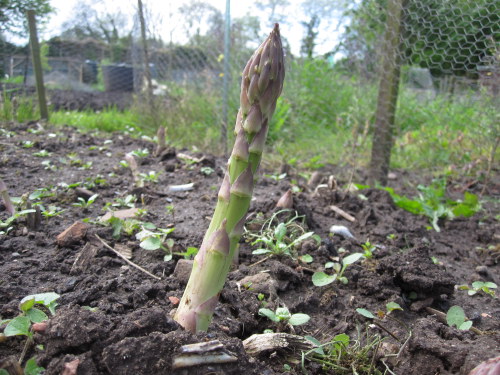 I picked a bit of this, 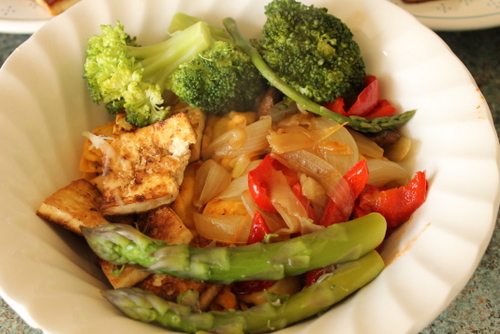 and made a bit of this.  Pasta with broccoli, asparagus, pepper, onions, mushrooms and tofu sauteed in shoyu.  Some of us liked it, some of us picked out bits of it and some of us pinched the best bits off of some other people's plates.

Had a chilly weekend.  Sunday was our town's football tournament.  It's only a small town, but every year the football club organises a fantastic two-day football tournament for the junior teams.  It takes a huge amount of work, and the people who give up their time to make it work are wonderful.  The boys (and some girls) had a fantastic time, although it was cold, cold, cold on the touchline.  I took a cheese sandwich and a flask of cocoa to keep up the energy levels.   As well as a picnic blanket (not needed), an umbrella (needed), a book (not read - what was I thinking?), drinks and snacks for the littles, spare studs, waterproof coats, my camera and my everyday bag which has almost everything that could ever be needed.  Honestly, sometimes when I leave the house you would think I was going on holiday for a week, and not just popping out for a few hours. 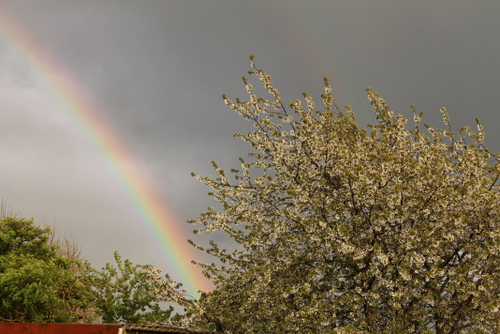 Saw this at the weekend, at the end of the garden.  It's not our tree, but I can see it from the kitchen sink, where I spend quite a lot of time.  Right now it's looking beautiful.  After it rained on Saturday evening, the sun came out and this lovely rainbow appeared.  I just need to work out where the pot of gold is now.
Posted by CJ at 21:39