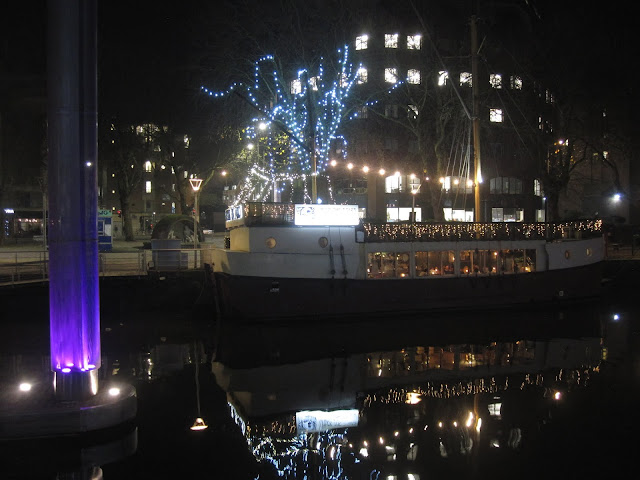 I wanted to come here and write a post a couple of days ago, but alas I had no photos. I still have no photos except this one that I snapped in the city centre last week. I got in a horrible pickle with the one-way system (again) and ended up accidentally driving down a bus lane, for which I have been fined £30. Sigh.

The mud is really starting to take hold around here. I spent the weekend squelching about, firstly at the fishing lake, then through various football places. Today the dog seems to have a crispy underbelly which I am guessing is mud. The advantage of a brown dog is that I can just pretend that it's not there.

Anyway, almost no photos, and when I made a photobook as a gift the other day I realised that I don't have nearly as many of the children as I used to. They like to go about and do their own thing more of course, plus they are not so keen on having the lens turned on them. It was mostly moody shots of clouds hovering over Welsh mountains and the dog shooting past in a blur of fur and flying ears. Even he is not keen on the camera.

I have been ignoring the festive season and hoping that it goes away. For some reason it is causing me all sorts of anxiety and stress this year. I am spending far too long thinking about it, but I'm not quite sure why. I had some sort of a shouted conversation with the eldest about it. I couldn't quite follow it and I think I may have lost, but it was something to do with 2.2 billion people (his point), people just wanting stuff (my point) and presents being ancient and traditional, vis-a-vis gold, frankincense and myrrh (his point). Me: Oh, so you want gold, frankincense and myrrh do you??? Him: Wouldn't mind. I am working on it. Wouldn't want to disappoint.

The exciting local news is that there are four brand new trees on our morning dog walk, planted as part of a plan to put in 1,000 trees in the town. Bertie approves wholeheartedly and was straight over to check them out. Also, a dog was lost and then found, which is exactly the sort of happy news story I like to hear. You may recall I have sworn off of political news until something sensible happens, so I am on the lookout for cheery items by way of replacement.

On the subject of cheery, the library was utterly delightful today. I popped in on my way to the shops and the rain was hammering down on the skylight, the lights were on, the librarians were chatting happily in a quiet rain-induced lull and I was surrounded by books. I think I'd quite enjoy working in a library, although you know that as usual I am seeing it all through rose-tinted glasses.

I shall endeavour to take some photos soon. I'll creep up on the dog when he's asleep or something. In the meantime, a bientot.
Posted by CJ at 21:56