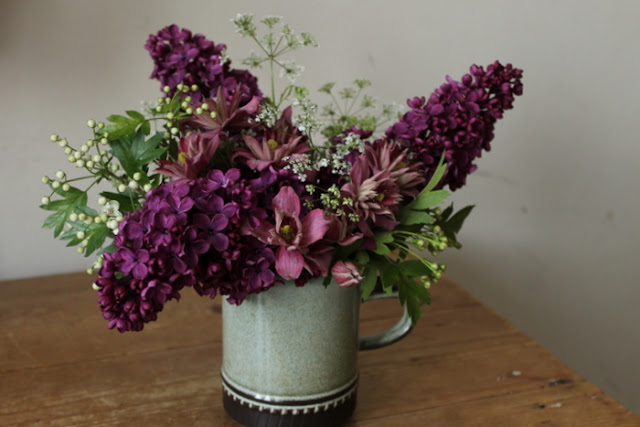 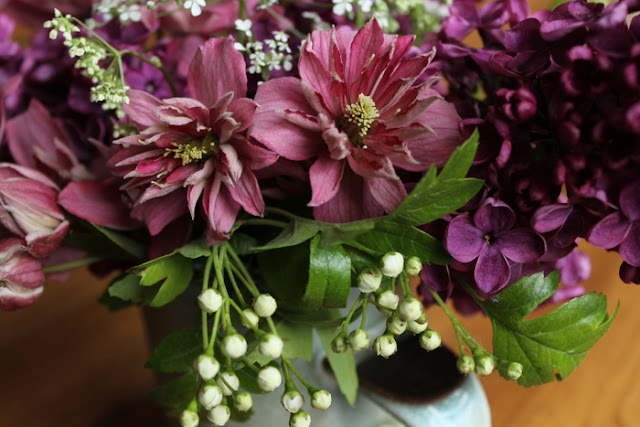 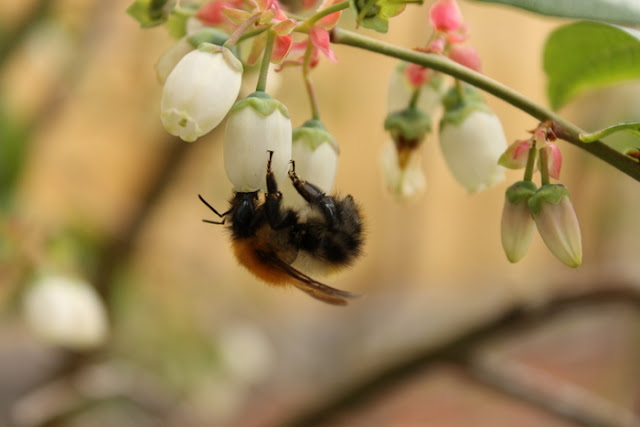 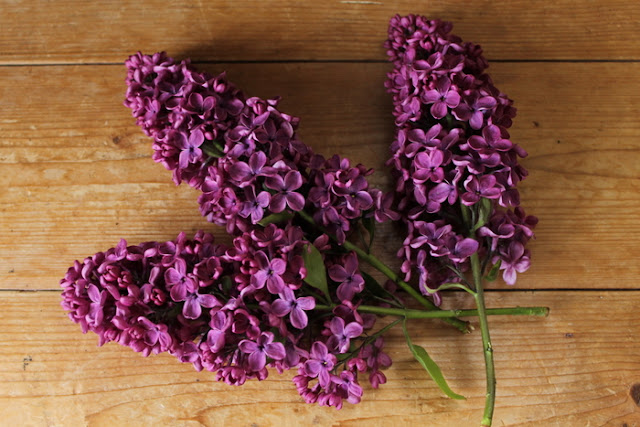 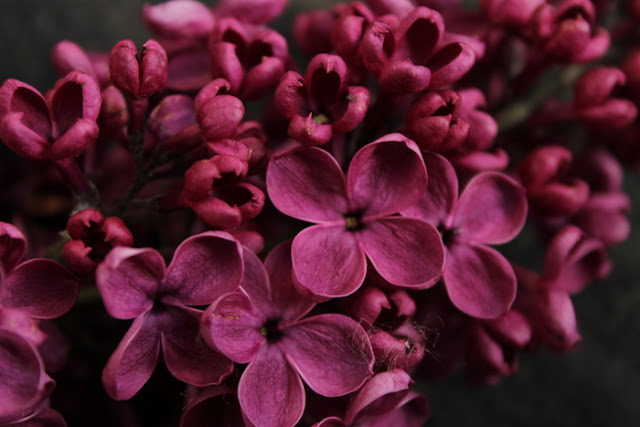 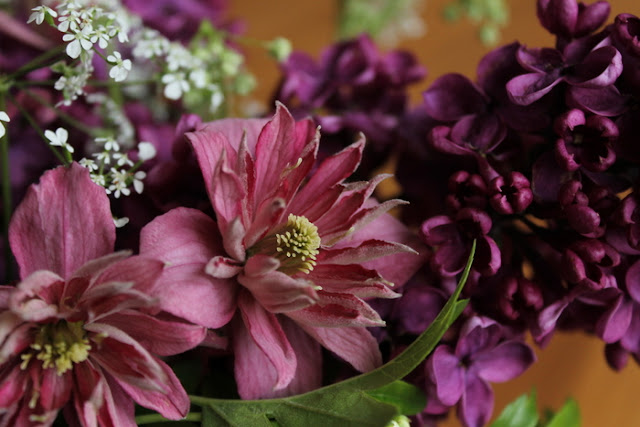 Stolen lilacs. They're just so gorgeous. The tree is in a playing field near here. The local authority hacked it right down a couple of years ago and now it is more bushlike in form. It had quite a few blooms this year though, so I filched a few. The rest of the flowers are from the back lane. Clematis, cow parsley and hawthorn.

It's been a busy week here, but not in a particularly productive way. Lots of rushing around. Lots of instances of me telling people to get ready and then finding that they are still not dressed and it's time to go. You have ten minutes somehow translates to It's perfectly fine to carry on lolling about, you can of course get dressed, pack your stuff and get your shoes on in twenty-three seconds. Lots of cricket, it's that time of year. I went to my first match of the season on a lovely village cricket pitch. Swifts were flying overhead, there was a slight evening chill and the gentle thwack of leather on willow, you know how it goes. Slightly marred by a cloud of midges, but I found that when I moved away from the gathered children it was fine. The midges were sticking closely to the small people. 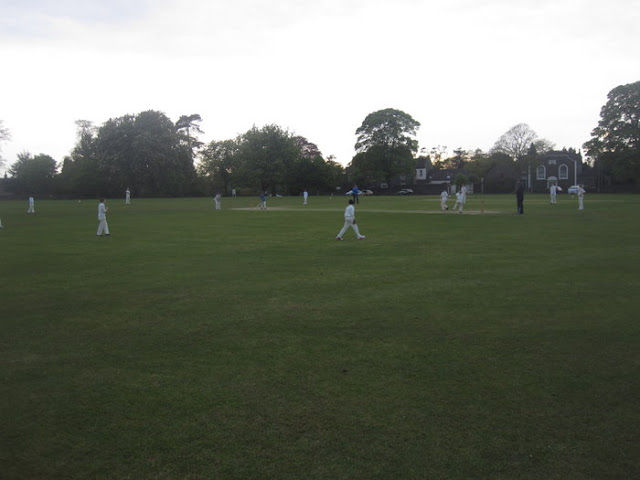 On the way home there was the most spectacular sunset. The whole countryside was lit up in pink. The apple blossom in gardens and orchards was glowing white against the warm evening light. Stone walls were a soft pink. There was a gap in the clouds just above the sun and shafts of pink light were dropping down to the horizon. The edges of the clouds were gilded with rose gold. As we drove we spotted the sun just behind some trees. It was absolutely enormous and a flaming apricot colour. Even the children were impressed. I didn't shut up about it all for a good ten minutes. The middle boy said, "Mum, d'you think this is why you get lost all the time?" Could be, could be.

I finally sat down to do some work after lunch yesterday after a ridiculous morning of chasing my tail. I'd only been there a couple of minutes when there was a dull bang. I stuck my head up like a meerkat and listened for a bit. Nothing. I happened to glance out of the window and saw a pigeon sat on the little patio wall looking a bit sorry for himself. He must have flown into an upstairs window in the high winds. I watched him for a while. He could walk perfectly well but looked a bit sleepy. In fact after a few minutes he settled into a doze. Of course, I kept looking up to check on him every two minutes. Eventually he woke up again and walked up to the other end of the wall. I started worrying that if the children saw him they'd insist on a full dramatic rescue. I started googling injured pigeon and RSPCA. Luckily the next time I looked up he'd flown off. Phew. Drama avoided. But of course that was most of the afternoon gone.

In the garden, bees have been working hard for weeks pollinating the blueberries. I can see them from the kitchen, there are at least a couple out there at any given moment. 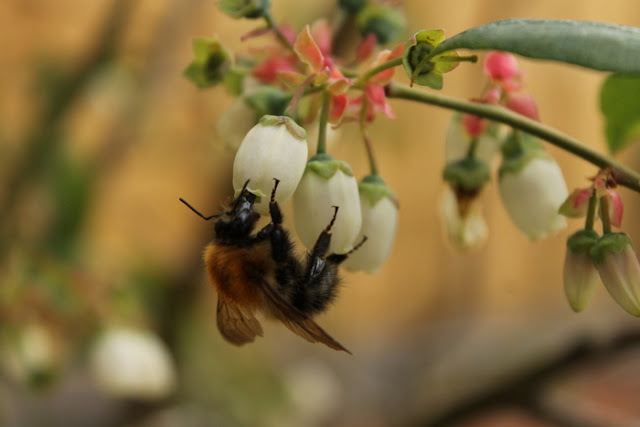 The great tits are working equally hard feeding their chicks. I shall miss all this spring life when it moves on, although hopefully they'll all still be around somewhere.

Surprisingly there are quite a few peaches on the peach tree. I don't bother hand-pollinating it any more, but I have lifted the crown of it so the peaches will hopefully be further away from flying footballs/cricket balls/tennis balls/frisbees. 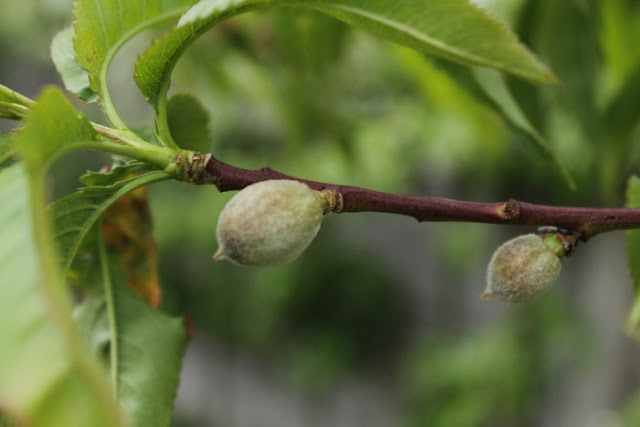 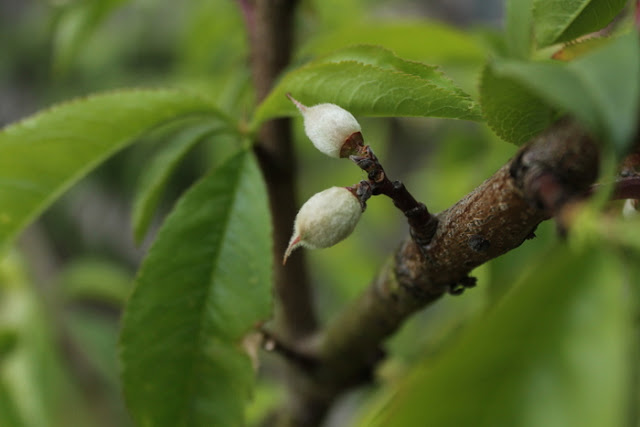 The peach leaf curl is the worst it's ever been this year though. It's a fungal infection that appears on the new growth. 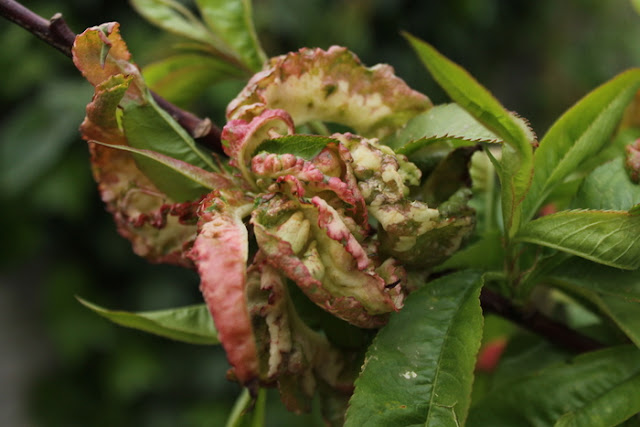 The dry weeks haven't helped at all - to avoid it the tree needs to be out of all rain from November to mid-May. In the past I've picked off the affected leaves, but for a couple of years now there have simply been too many. I'll just have to hope that the tree stays vigorous enough to produce peaches.

The garlic is looking slightly odd. 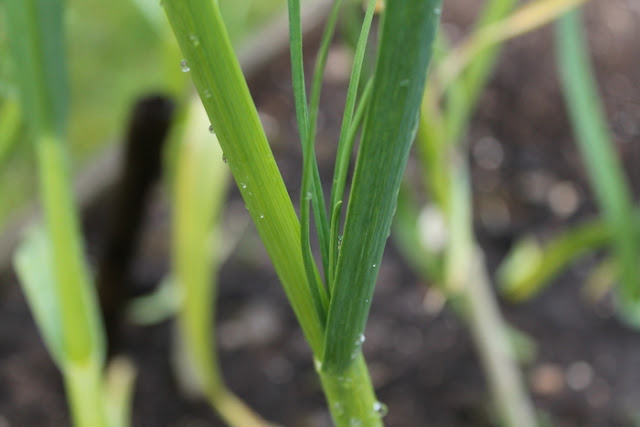 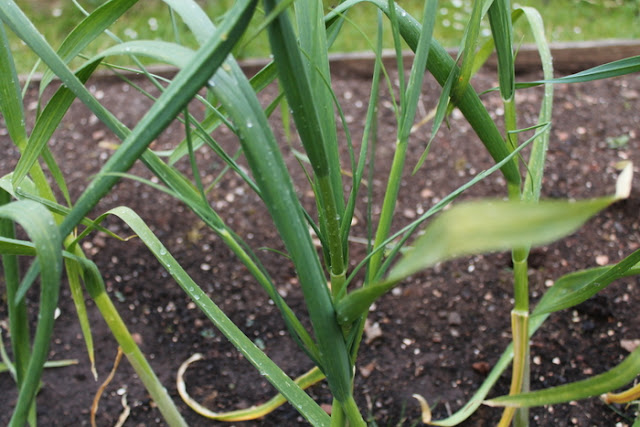 It has lots of fine grass-like growth popping out of it. Is this something to do with flowering I wonder? No doubt time will tell. I bought new garden shop bulbs to plant this year and I'm growing it at home because there's been terrible rust down at the allotment for the past couple of years. Hopefully the new healthy stock and a change of location will help. Rust is another fungal infection which will also weaken the plant and lead to small or unformed bulbs. 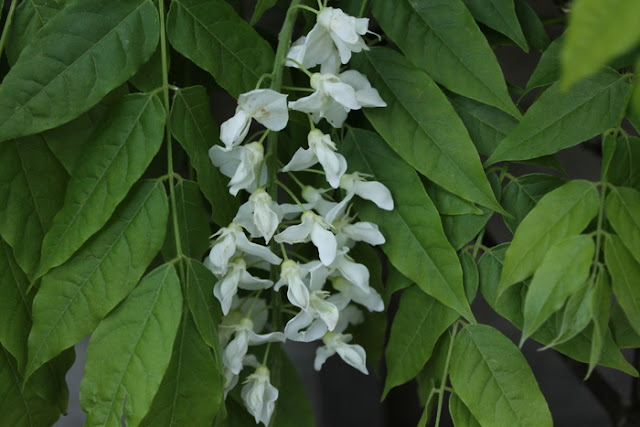 My white wisteria has flowered at last. It was a tiny plant when I bought it, and it's still fairly small in the scheme of things, but there are two or three flower stems. I have grand plans to train it up the back of the house. At the moment it's headed up a fence so a job for this weekend will be redirecting it. The winds have also knocked over the hazel tripod that the tayberry is growing up, so there's that too. And the grass. And, oh, you know how it is out there at this time of year, it's all going on. Wishing you a good weekend with a little garden or outdoor time. CJ xx
Posted by CJ at 07:51