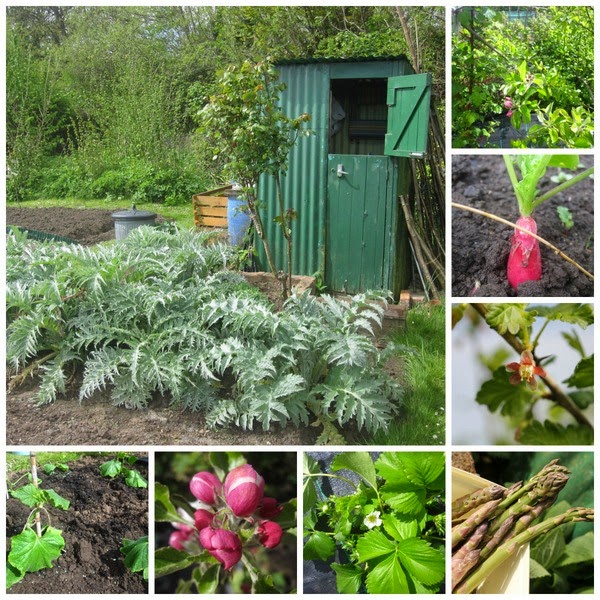 April is the month when those first delicious tastes of spring are ready.  A little asparagus, a few sticks of rhubarb, fresh new salad leaves and maybe even a radish.

After a week that felt like summer, and that lured me into planting out the tomatoes, it's turned wintry.  Some of the tomatoes are looking distinctly sad.   I went too soon.  I always do, I get fed up with watering all of the little pots every day.  Usually I get away with it.  This year, maybe not.

I've also had a few no-shows amongst the older seeds.  Packets that have been in the box for a couple of years or so have failed to germinate.  So no sweet peas, not many climbing French beans, no lettuces.  I shall re-sow, or maybe pick up a few sweet pea plants if I see some.

This morning I spent some time digging out bindweed and horsetail.  Nasty persistent weeds.  They'll be back before too long I know, but for now I'm in control.  I've got cucumbers, squashes and courgettes planted out as well (I know, I know).  They're hanging in there at the moment, but I'm really hoping it doesn't get any colder.

The new apple trees at the plot are in flower.  I only planted them a few months ago, it's their first season so I'm not expecting much, but they're clearly nice healthy plants.  The strawberries are in flower too, although they seem to be struggling a bit for some reason.  I don't know why.  Possibly something's eating the leaves.  They just don't seem to be taking off.

I've sown beetroot, turnips and swedes at the plot this month, and I've got sunflowers, borlotti beans, leeks and celeriac growing in pots that will be moved there eventually.

There's been a bit of watering done this month after a distinct lack of April showers.  I think it's all set to change soon though, so I'll be putting the watering can away.  So long as it gets a bit warmer I don't mind.
Posted by CJ at 16:39