While I was washing the kitchen floor 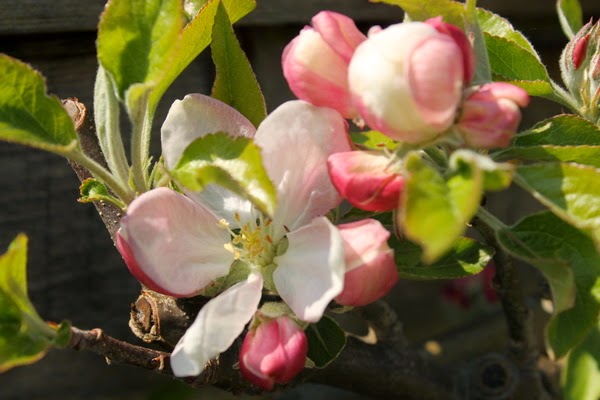 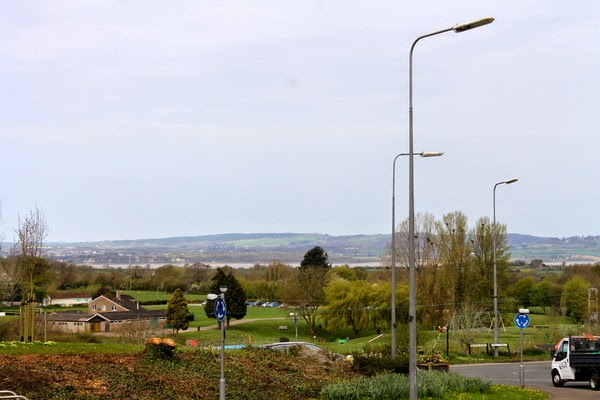 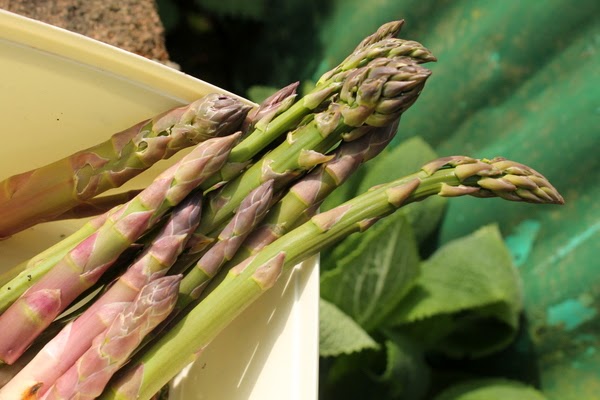 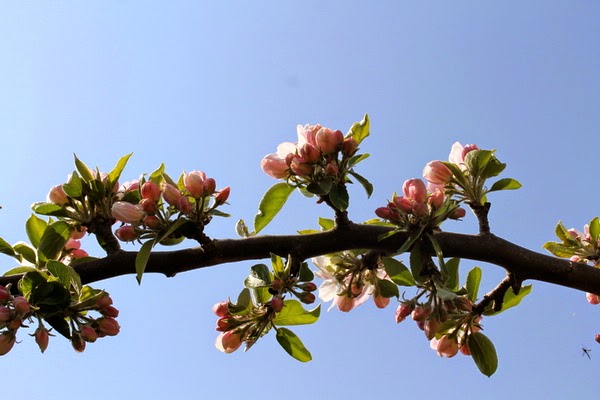 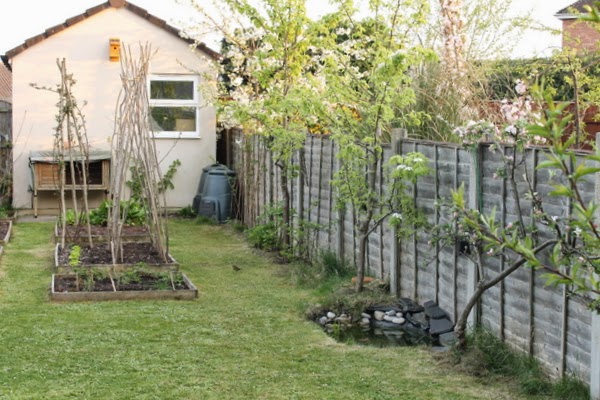 I took that last photo just an hour ago.  It was such a lovely warm afternoon here, and the early evening had that wonderful still quality you get in summer.  Birds singing, the sun sinking, and tranquil hazy air that just makes you stand and gaze for a while.  I tried to capture it in the picture, but it didn't really translate.  Maybe you need the sounds and smells as well.   There's a robin in the photo, you can just make him out beyond the pond.  He's been in and around the garden all day, singing his heart out.

Down at the allotment there is plum blossom.  A total of two whole flowers.  Although the tree is young I had far more last year.  I can't imagine where the blossom is.  One of the pears in the garden is the same.  There was a good crop last year, and this year one solitary sprig of blooms.  I might have expected it of a pear, they tend to be a bit biennial, but the plum is a surprise.

The picture with the river in the background is another thing I tried to capture but couldn't really.  It's on the way to the plot, and the river looked quite blue and still, like a lake.  You'll have to take my word for it.

I picked the first of the asparagus on Friday, and we had it for lunch.  Quite delicious.  There'll be some more by now.  And every few days from now until the summer solstice.  People will be complaining by then.  "Not asparagus again."  But that is the beauty of seasonal eating isn't it.  Eat it again and again until you can't stand it any more, then none at all for ten months.  By which time you can't wait for the first exquisite taste.

The tiny flowers of the gooseberry and blackcurrant are opening.  Bees are abroad and also a surprising number of wasps.  This is also the time of year you have to put up with an overload of apple blossom photos.  I just can't help it.  I don't photograph daffodils or snowdrops or primroses to excess.  But apple blossom I can't resist.  Possibly because I walk past it several times a day.  Wait until the bees find it.  Then you'll have bee on apple blossom.  Possibly even two bees on apple blossom.  The two trees I grow next to each other, in the hopes that they will cross pollinate each other, have different colour buds.  The Egremont Russet is a deep bright pink.  The Ribston Pippin is paler, more subtle.  Oh alright, I'll shut up about it all now.

Monday is my day for restoring order to the house.  I dust and hoover, clean the bathroom, wash the kitchen floor, you get the drift.  While I was washing the floor today there was a jaunty knock at the door.  I opened it to find a government minister on my doorstep.  He's our local MP, so it wasn't entirely unexpected, but nonetheless it was all quite exciting.  I grilled him lightly on a couple of topics, but really all I could think was, "I listen to you on Radio 4" and "Thank goodness I washed the front door yesterday".  Other half is not impressed with politicians (I'm easily impressed by just about anything) and when I told him what I'd been thinking he said something like, "Have you seen what you look like though".*  What, it was cleaning day, I always wear the jumper with the hole in it and the security blanket cardigan.