With sailing we're back to the cool colours that I love so much.  Every shade of grey, muted blues, flashes of white.  It's no surprise that people go to stare at the sea on their holidays.  The distant horizon, the soothing colours, the slow pulsing of waves on the beach, it's all designed to drop your blood pressure way down low. 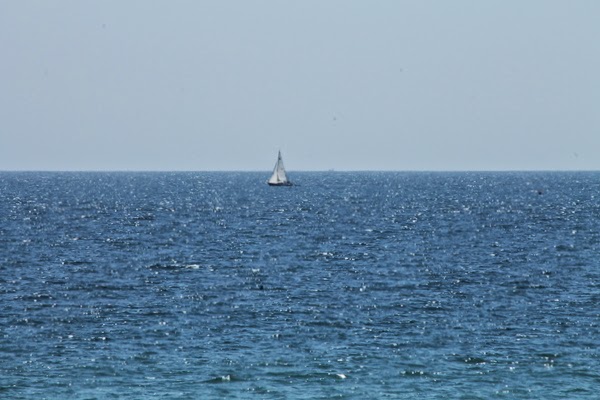 I'm no sailor, but I'm guessing that sailing can raise it way back up again.  Crashing through big seas, skimming white-topped waves, leaning into the wind and holding on for dear life - it's got to be exhilarating don't you think?  The ocean is seductive, calm and hypnotic at times, but turning angry and dangerous in the changing of a wind.  I suspect it's addictive, sailing.  Always different.  Always exciting.  And a million miles away from the cares and stresses of life on land. 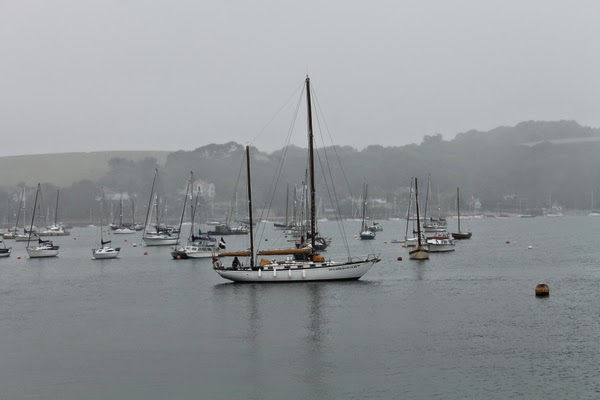 But something else I know.  It's expensive.  I've heard it compared to ripping up fifty pound notes while standing in a cold shower.  These kinds of boat are surely just for the wealthy. 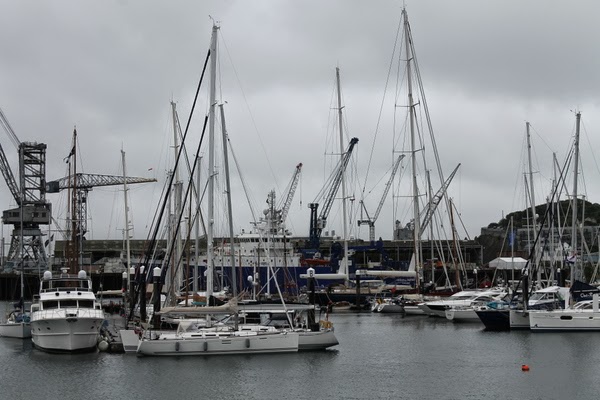 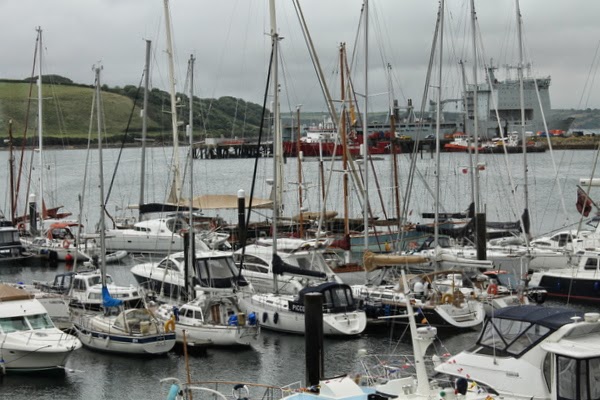 Sailing isn't a pastime for ordinary people.  You couldn't save up your dinner money and buy yourself a boat or anything.  Except, well, if you were very determined, maybe you could.

This is Dame Ellen MacArthur.  Her parents were teachers and she grew up in landlocked Derbyshire, but a combination of factors, including a holiday with an aunt on the coast and the reading of the Swallows and Amazons books, meant that she fell in love with sailing at a young age. 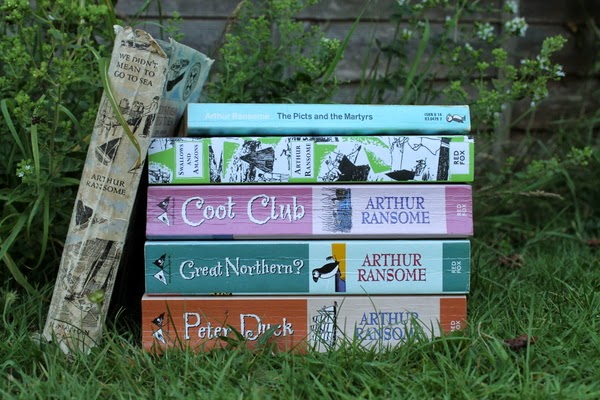 To buy her first boat, an eight-foot dinghy, she saved her dinner money for three whole years.  She'd take a little food from home, an apple from the fruit tree, and every single day she'd save the money for her meal, until at last she had enough for a boat of her own.  Amazing no?

She spent hours at libraries reading everything she could about sailing.  She worked at a sailing school whilst still in education, and by the age of 17 she had bought a bigger boat.  She passed her Yachtmaster qualifications with the highest possible marks, and at age 18 was awarded Young Sailor of the Year.  And she set sail on her new boat, the Iduna, spending four and a half months alone sailing around the British Isles.  After waving her parents and siblings goodbye, she was truly alone, coping with every problem and difficult decision without help.  In her own words, she left the harbour a shy girl and returned a young woman who was learning how to handle being alone, how to deal with fatigue and stress and how to make life and death decisions.

In an attempt to take her dream to the next level, she wrote 2,500 letters to potential sponsors.  Only two even replied.  She persevered, living in a Portakabin with just £10 a week for food.  She had found a business partner, although in her autobiography, "Full Circle" she says, "We had nothing bar enthusiasm and the most intense ambition..."

A surprise legacy from her nan enabled her to enter a transatlantic race, in a boat chartered at the last minute.  She won her class, and her victory at just 22 years old persuaded Kingfisher plc to sponsor her entry in the Vendee Globe, a single-handed round-the-world race, sailed not only alone but without assistance.  She came second.  Those who had thought her previous triumphs were just luck were forced to take her seriously.

In November 2004, aged 28, she set sail from Falmouth in an attempt to break the world record for single-handedly sailing around the world, a distance of some 27,000 miles.  The record had only recently been set, in a bigger, faster boat, and was considered unassailable. 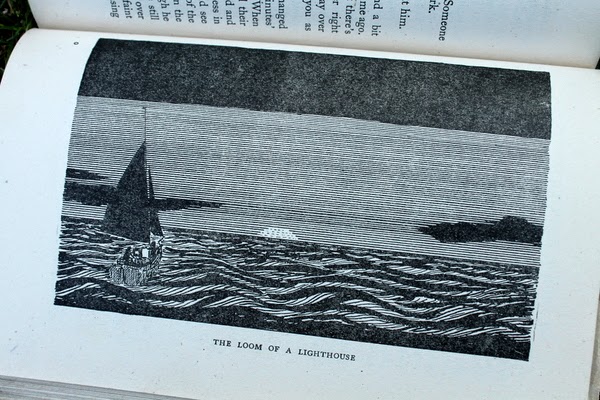 Ellen MacArthur spent seventy-one days alone, enduring everything the oceans had to throw at her.  She slept little, and for no more than twenty minutes at a time.  Her mental toughness has always amazed and inspired me.  I can't imagine what she went through on the voyage.  While there were highs, and records along the way for the fastest speed times to the equator, the Cape of Good Hope, Australia, Cape Horn and back to the equator, there were lows as well.  In the Southern Ocean, the waves can be as high as five- or six-storey buildings.  She was on a multi-hulled boat, a dangerous proposition in such huge waters and when faced with icebergs and gale force winds.  She knew full well there was a risk of death.  Her exhaustion was obvious in her video diaries.  She badly burned her arm while changing generators and suffered injury scaling the mast to carry out repairs.  The loneliness is something very few people could cope with, let alone keep functioning through to achieve something so momentous.  The colours of the oceans and the heavens must have been burned into her brain by the end.  Every soft shade of grey and all of the dark purple slate colours of storm clouds.  Hour after hour spent gazing at the sea and the sky.  I imagine that days went by when all she saw was a monochrome palette.  And I can picture the gift of a beautiful pink and orange sunrise after a black night of sleepless exhaustion.

When she returned to Falmouth, 71 days, 14 hours, 18 minutes and 33 seconds after she set sail, the record was hers.  Later that year she became the youngest person to be awarded Dame Commander of the British Empire.

Hers is a story that I love to hear.  There was nothing in her background to give her an easy passage into the exclusive world of competitive sailing.  She overcame impossible odds, she persevered and she never, ever gave up.  Her attention to detail was meticulous.  She was always the best that she could be.  She is for me one of the most inspirational people in the world.  I draw on stories like hers when I need strength.  I can't imagine that she would hesitate when it comes to a dream.  Problems are there to be overcome.  There is always a way forward.

It seems to me that to succeed, maybe your enthusiasm and ambition just need to burn brightly enough.  Start small.  Keep pushing.  And the world can be your oyster. 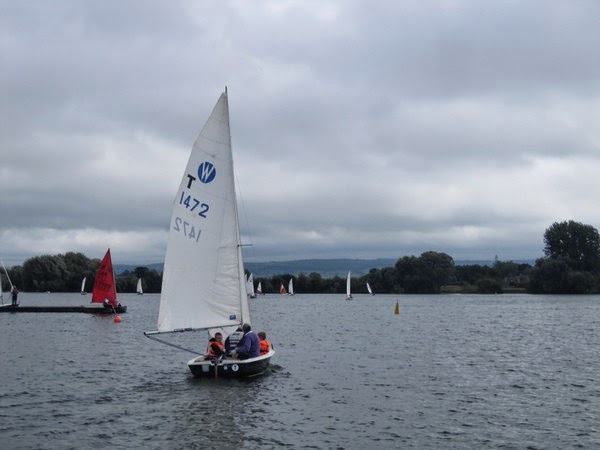 To visit the other Colour Collaborative blogs for more of this month's posts just click on the links below:

What is the Colour Collaborative?

All creative bloggers make stuff, gather stuff, shape stuff, and share stuff. Mostly they work on their own, but what happens when a group of them work together? Is a creative collaboration greater than the sum of its parts? We think so and we hope you will too. We'll each be offering our own monthly take on a colour related theme, and hoping that in combination our ideas will encourage us, and perhaps you, to think about colour in new ways."
Posted by CJ at 05:30