July at the allotment

It's not looking particularly pretty at the allotment at the moment.  A week away and not enough hours down there mean there are weeds, and for some reason I don't seem to have enough produce growing.  But let's have a look round anyway. 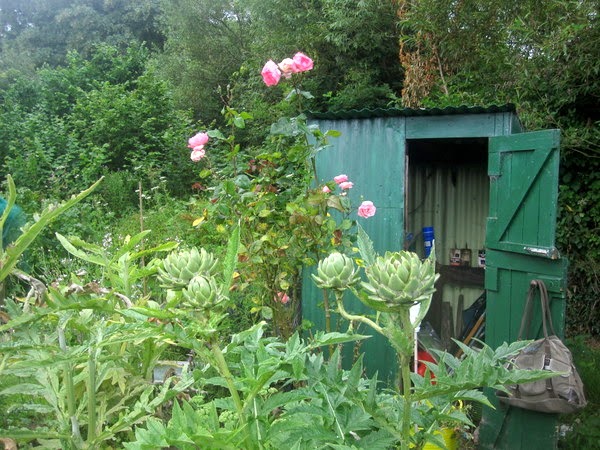 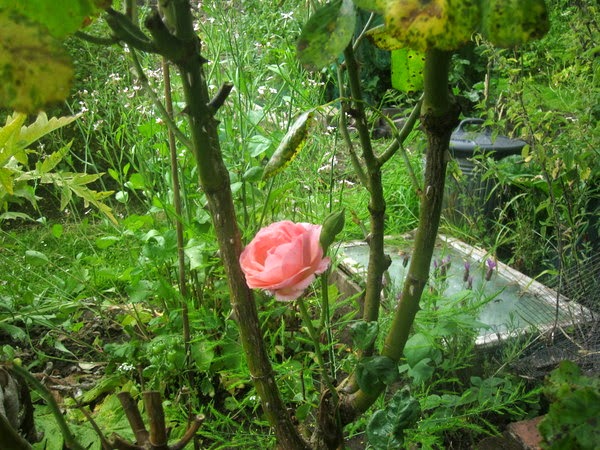 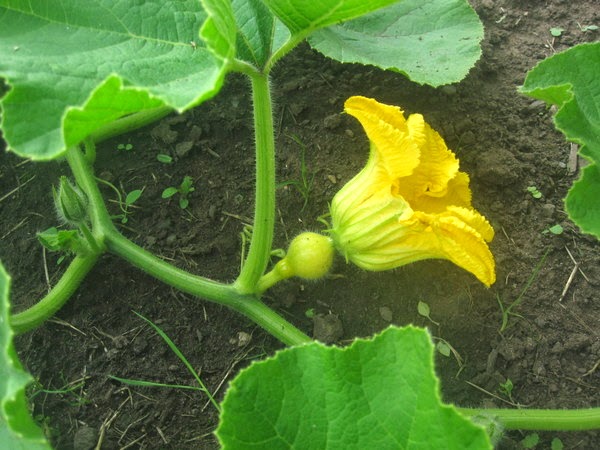 These are radish seed pods.  If your radishes bolt and flower, fear not, the pods are just as delicious.  Some of them were really peppery.  Perfect in salads and stir fries. 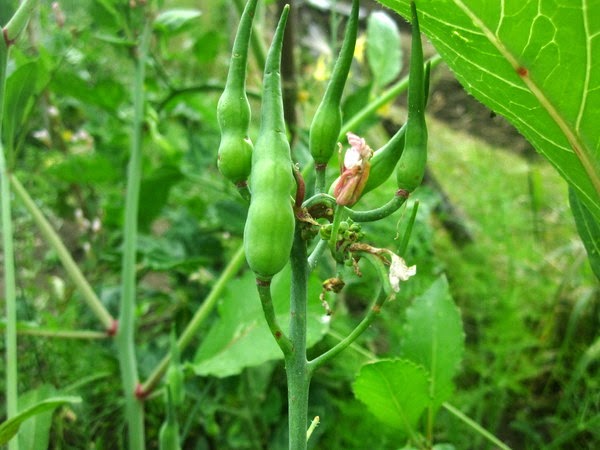 Tigerella tomatoes.  I've never managed to grow these successfully before, so I'm quite excited.  They should be nice and stripy when they're ripe. 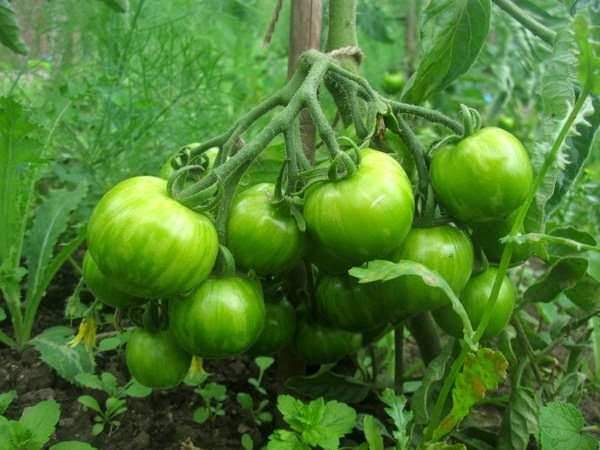 The beautifully neat plot in the background isn't mine.  I've no idea how people stay on top of the weeds, it's impressive.  The other plot next to me has been taken in hand as well.  The new plotholder cleared it in about three days, and that's immaculate too now.  Which makes mine look even scruffier.  But hey, I have flowers! 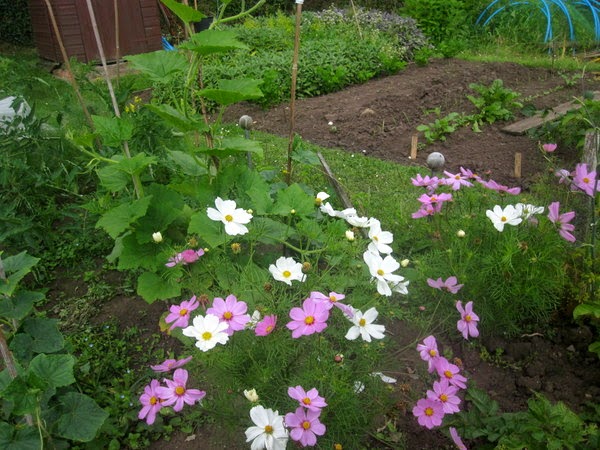 And the beginnings of some courgettes.  This one is tromboncino, which is oddly shaped - bent and bulbous at the end.  It's a climbing one and I've grown it in amongst runner beans before now. 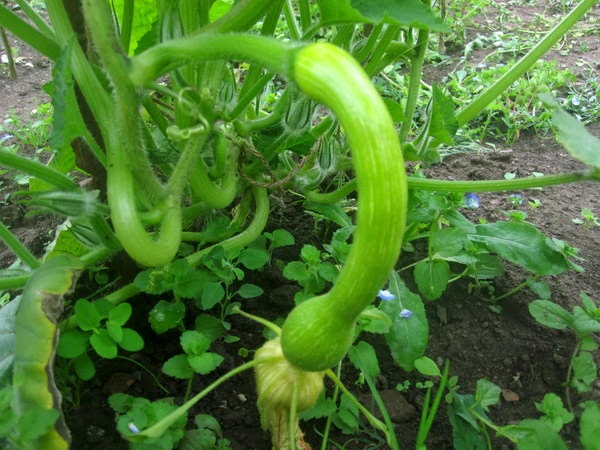 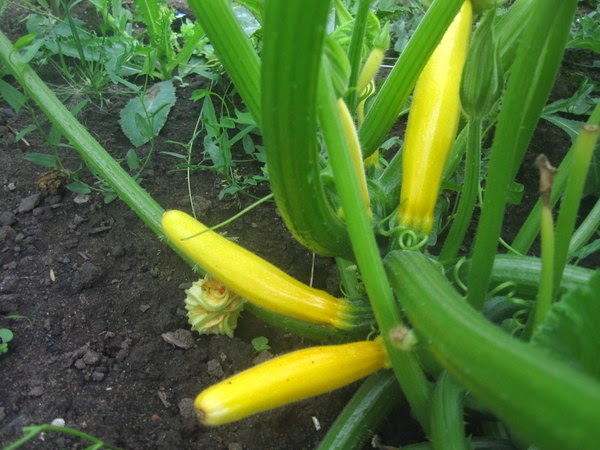 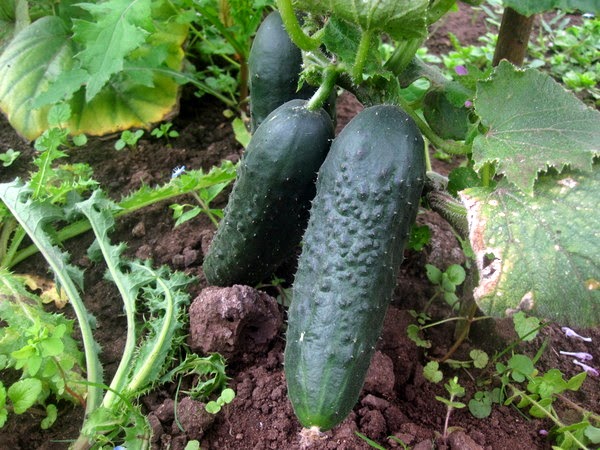 The sweetcorn is doing well.  The middle boy has grown ordinary corn (Sundance I think) and the littlest boy has popping corn (Fiesta) from the James Wong range.  I've heard that the badgers wait until the cobs are perfectly ripe, then they demolish every last plant and leave not so much as a niblet.  I have a cunning plan though.  I'll pick the corn the very day before the badgers eat them, thus thwarting their evil plans.  Imagine how sad the little people would be if the badgers win.  The pressure is on to get it right. 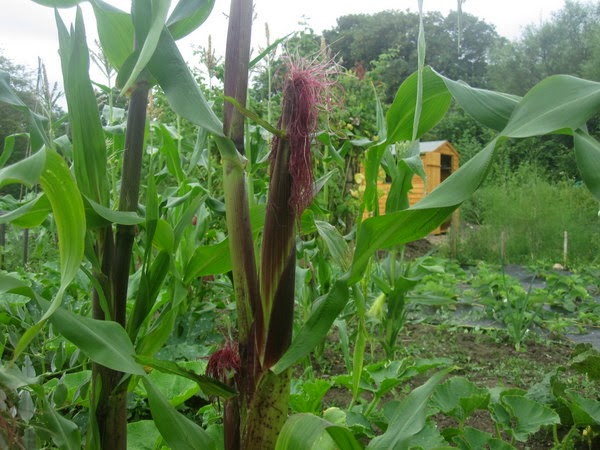 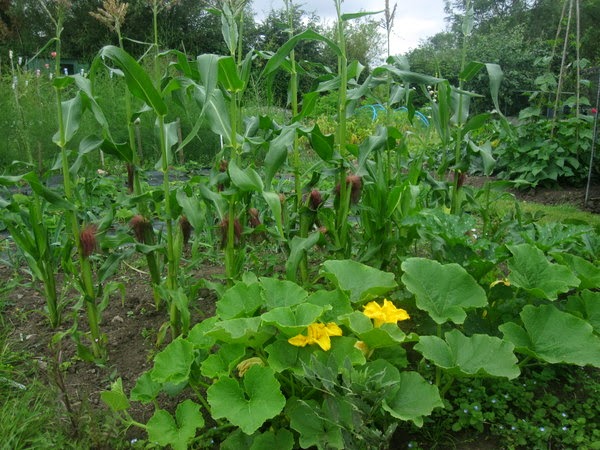 There's a squash or two rambling about the place.  Ukichi Kuri and Queensland Blue I think.  Does anyone else have trouble with disappearing labels?  I think I need some bigger ones, the tiny ones I use just seem to get lost.  Sometimes I find labels from the plotholder who used to have the land.  It's intriguing to see what things and what varieties he grew.  He had the plot for 45 years, so he must have picked up a trick or two.

Shall we venture up to the wild(est) end of the plot?  It's where the fruit lives.  And probably the wild things too.

I'm wondering if this Japanese wineberry is ever going to do anything.  It's had these fuzzy buds on it for ages, without anything happening. 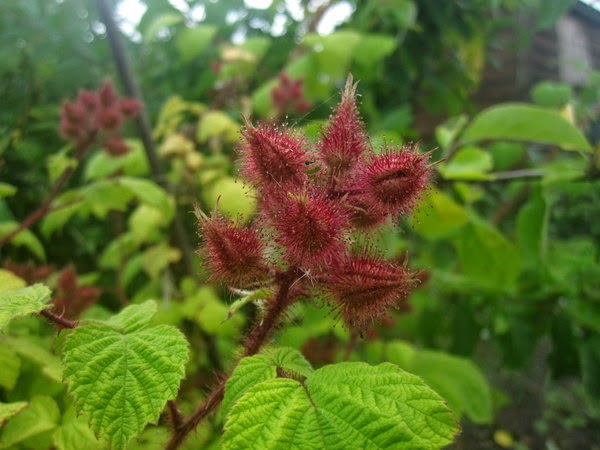 Gooseberries and blackcurrants ripe for the picking.  I took some gooseberries home, the blackcurrants will have to wait for another day.  There aren't as many this year, maybe last year was exceptional.  In fact I still have some of last year's blackcurrants in the freezer.  We had far more than we needed really.  I'm thinking about cordial. 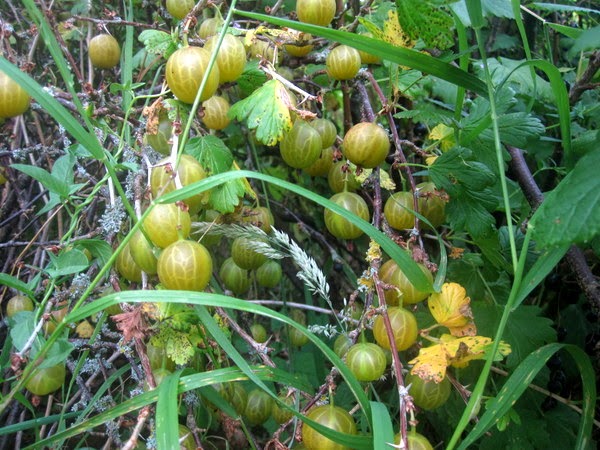 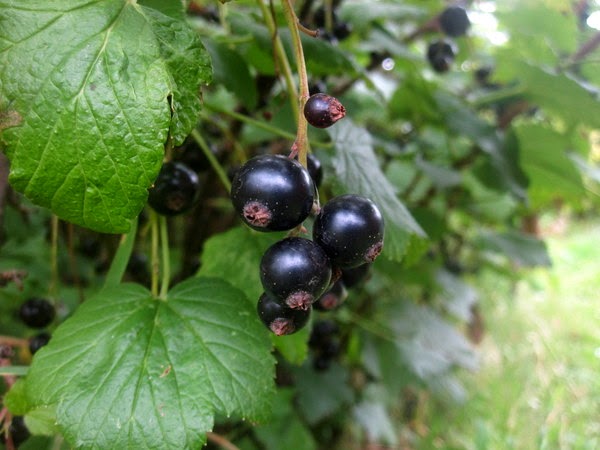 This is the plot as viewed from the shed.  Under the enviromesh there are six sprout plants that I got from the "Free Stuff" area at the top of the site.  I've not grown sprouts before, and I'm hoping for a little crop for Christmas lunch. 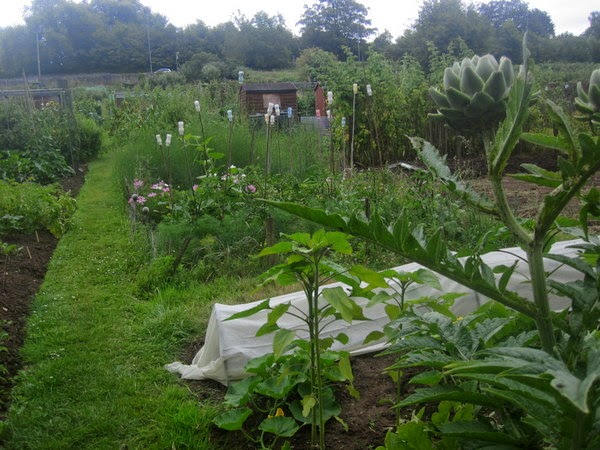 The little lavender is flowering and attracting bees.  A nice touch on a fairly rampant plot.  The weeds are growing like mad.  I relied on the forecast of a possible heavy shower and didn't do any watering today, so of course it has stayed dry.  So everything is in dire need of a drink as well. 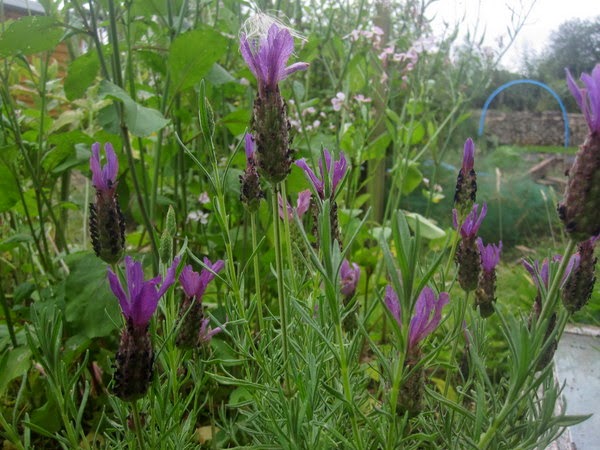 I'd like to put in some French beans and maybe one or two other things as well.  There's some space now where potatoes and onions have been harvested.  The plot needs to be a bit more productive if possible.  The carrots and beetroots I sowed failed, which is disappointing.  I don't seem to be able to grow things directly in the ground.  If I put in small plants I stand a much better chance.  I'm not sure why.  It all works for Monty Don, it's very frustrating.

As from the end of the week I'll have three little helpers with me on plot visits.  I'm considering offering cash for weeds.  Is this a viable plan do you think?  They are still a bit obsessed with World Cup stickers.  If I offer 1p per weed, then for every fifty weeds they can buy a pack of stickers.  Or is this kind of bribery considered to be psychologically damaging these days?  I never know what I'm supposed to be doing.

Thank you for all of your sweet comments about the feathery thing.  It was back to wellies today.  I'll get the biggest boy to take a welly photo of me in the holidays, to balance things out.  I never intended to have a blog with no photos of me on it, but I so rarely have pictures of myself to share that it's somehow turned out that way.  Must try harder.  Again.
Posted by CJ at 21:59